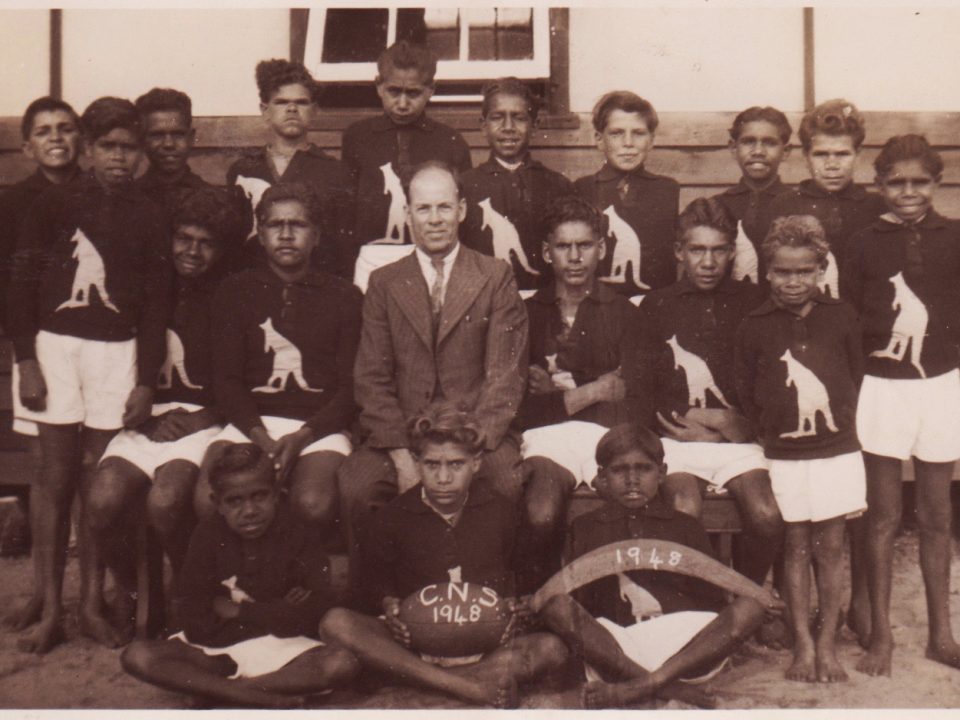 Last year, I posted a blog about the ‘never ever beaten’ [1] Carrolup School Football team, describing their trip to Perth in September 1949 where they twice beat Thomas Street School at Subiaco. Here is what we know about the Carrolup School football team from before 1949:

There is a brief mention of Carrolup School football team decisively beating Katanning School in the Great Southern Herald in August 1947, but no indication of the scores.

‘Last week the Carrolup lads came in for a football match against our boys, and so well had their coach trained them that they secured a decisive win. Playing barefoot, they were speedy and nippy, well deserving their success in a very interesting and sporting game. Our boys are looking forward to the return match when they hope to keep the scores more even.’

On the 11th of June 1948, the same newspaper reports that the visiting Carrolup team beat Katanning School 12.4 to 3.1 two days earlier, with Bert Smith scoring seven goals. Parnell Dempster and Reynold Hart are amongst the best players. The article states:

‘… the speed and sureness of the visiting team right from the initial attack left Katanning somewhat dazed for the first half of the match. Making sure of every mark and disposing with speed and accuracy and with an uncanny certainty in front of the sticks, Carrolup raised a score of 5 goals and 4 goals and 1 point in the first and second quarters respectively. One behind only being raised on behalf of Katanning. This is remarkably quick scoring as the quarters were of 15 minutes duration…

… It must be said for Carrolup that they have developed a particularly unique style of football within the Australian code. It is usually considered bad football to run and bounce the ball; however, these lads were so fast and sure in this particular department that it would have taken a greyhound to catch them. In addition, the manner in which they kept the ball moving, their dodging tactics, and their handball made it a pleasure to watch them in action. It will take a good team of boys to beat Carrolup Native Settlement School at football. The performance is all the more remarkable when one sees the equipment they work with; a small ball quite shapeless and worn almost paper thin in spots, bare feet, and, it is understood, a sloping sandy patch of ground for their practice field.’

On the same day, the pupils of Katanning School are treated to an impromptu demonstration of art by six of the Carrolup football team. Working in separate rooms, the boys do a drawing related to any topic named by the Katanning pupils and in the colours prescribed by them. The topics range from a corroboree to a tree study in a sunset.

[1] Words used by Revel Cooper for the football team, in a description he wrote in 1960 about his life at Carrolup.