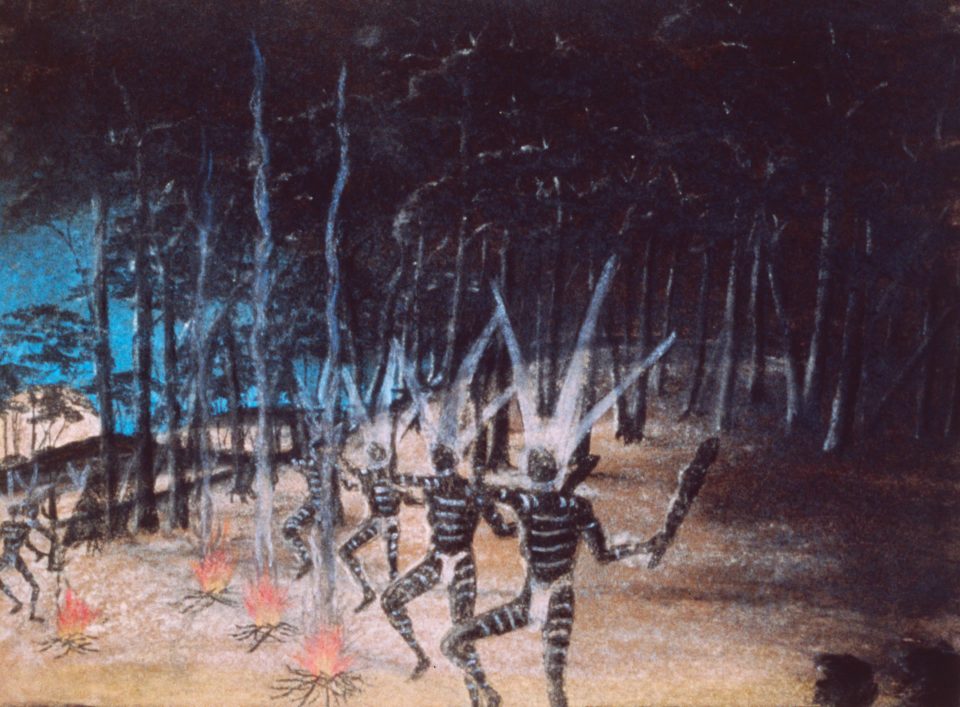 Seventy years ago, traumatised Aboriginal children of the Carrolup Native Settlement in South West Australia ‘reached out’ to white society with their beautiful landscape drawings. These drawings won international acclaim, but the children’s efforts were eventually thwarted by a government decision to close Carrolup School.

David Clark, an Professor Emeritus of Psychology, has linked up with John Stanton, former Director of the Berndt Museum of Anthropology at the University of Western Australia, on a new project that will help the children reach out again, not with just their art, but also with their enthralling Story. We are working with David’s long-time collaborator, website developer Ash Whitney.

John has been involved with the Carrolup Story for 40 years and played a key role in the ‘discovery’ of a lost Carrolup art collection and in bringing back from America key pieces of this collection for an exhibition at Katanning in 2006. David’s interest arose in part through his educational work focused on the healing of historical trauma amongst Indigenous peoples.

We believe in a strengths-based, solution-focused approach to healing that celebrates success and cultivates positivity, acceptance and cultural pride. Positive Stories facilitate healing.

In our Carrolup project, we celebrate the Aboriginal children’s artistic talents, as well as their scholastic, musical and sporting achievements, and their strong personal values and sense of community. We show how the children’s achievements challenged the core foundation of a government’s racist policies.

Our project also celebrates the achievements of Noel White, the teacher who helped the children overcome their trauma and inspired their art, and the 71-year old Englishwoman Florence Rutter who exhibited the Carrolup art on both sides of the world to much public acclaim.

We highlight the roles played by other people who helped the children during their time at Carrolup, and after the school closure when the children faced the adversities of living in a white-dominated society that considered them ‘inferior’.

Our project has involved the publication of an eBook, Connection: Aboriginal Child Artists Captivate Europe, in mid-2020. This book can be purchased via Amazon, Apple and Kobo, and can be read on mobiles, tablets and computers. David has written an article, The Aboriginal Child Artists of Carrolup, for Early Days, the Journal of the Royal Western Australian Historical Society (Number 104, 2020) which you can download here. You can download the cover of this Journal and read a blog post, Carrolup Child Artists Make History, I wrote about the article.

In addition, we are further developing this Storytelling, Education and Healing resource based on the Carrolup Story and its impact, as well as a grassroots engagement programme in local communities.

We are grateful to those people helping us with this project, including Noelene White, the daughter of Carrolup teacher Noel White. She has provided us with access to treasured family items related to her family’s life at Carrolup Native Settlement. The project has been encouraged and inspired by Noongar people, including cultural leaders, and leading experts in the healing of trauma.