Teacher Noel White [left side, just behind children in the above photograph] played a pivotal role in the development of the Carrolup children’s art, as described by John Stanton in the film clip below. Noel first connected with the children and helped them overcome their fear. He provided them with art materials and took them on regular bush rambles, telling them they would have to to draw what they saw the following day in the classroom. Although he was not an artist himself, he inspired the children, encouraged them to look carefully at what they were seeing, and provided feedback.

‘We encouraged them by praising their work and taking a keen interest in it.’ Florence Rutter, Little Black Fingers, 1950, p. 2 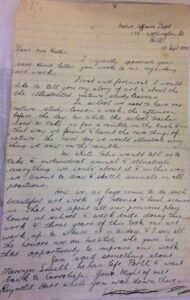 Letter from Barry Loo to Florence Rutter, written on 20th September 1950, after Barry had left Carrolup and was working in Perth.

We know that Noel played a pivotal role in the children’s artistic development from a letter written by School Inspector Charles ‘Sammy’ Crabbe to Dr Kenneth Stewart Cunningham, Director of the Australian Council of Educational Research, as well as from various newspaper articles. Moreover, credit is given to Noel White by one of the leading child artists of Carrolup, Barry Loo, in a letter he wrote to Mrs Florence Rutter.

‘In school we used to have one nature lesson a week, the afternoon before the day, Mr White the school teacher used to take us for a ramble in the bush and in that way we found and learnt the rare things of nature, the next day we would illustrate everything we saw on the ramble.

Mr White later would tell us to take an individual animal and illustrate everything we could about it and in this way we learnt to draw and sketch animals in all positions.

How we, us boys came to do such beautiful art work of scenic and bush scenes is that we spent all our precious hours at school and weekends doing this work and three years of this took our art work to where it is today, and I say all honours are on Mr White who gave us that opportunity to improve our work…’ Letter from Barry Loo to Florence Rutter, 20th September 1950. In: Florence Rutter, Little Black Fingers, 1950, p. 9

‘After Mrs Elliott went, Mr White came. The first year he came here, he found all the school children running around in the bush, looking like savages. Then he started to learn us some music. He had a flute which he used to play for us in school. Then he saw we were keen on music and he started to learn us a few songs. The first song he learnt us was Three Pigs. It wasn’t long before he learnt us a big list of songs.

He saw that we had some talent, we practised on brown paper night after night, for about two years, and our drawing started to win the respect of the white people….

The native children in the past wasn’t given a chance to learn, but since Mr. White took over the teaching at Carrolup we are now getting people to respect us and our drawings…. [emphasis in original]

Before Mr. White came to Carrolup nobody had heard the name of Carrolup, but now it is nearly known all over the World.’ Reynold Hart letter to Florence Rutter, 1950. In: Florence Rutter, Little Black Fingers, 1950, p. 11