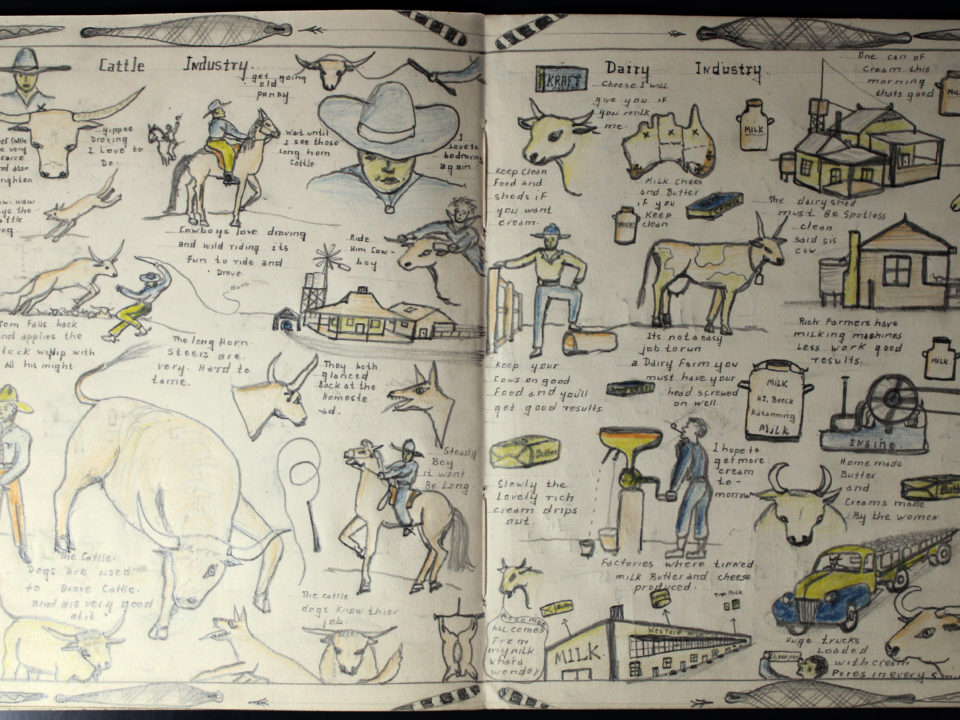 In an earlier blog, Early Public Acclaim, I described briefly how the Aboriginal child artists of Carrolup gained public attention in Western Australia. A major factor in this development was the acceptance by editor John Stokes of three articles by Carrolup children (Reynold Hart, Dulcie Penny and Vera Wallam) and one drawing (Parnell Dempster) in the Lord Forrest Centenary Booklet published in 1947. Only one other school in Western Australia, Perth Modern, had more submissions accepted for this booklet than Carrolup Native Settlement School.

John Stokes asked the children’s teacher, Noel White, if he would arrange for a number of Carrolup drawings to be sent to him so that they could be shown in the  Lord Forrest Centennial Exhibition. The children’s drawings were seen by thousands of people. Here is what else happens, as described in my eBook Connection: Aboriginal Child Artists Captivate Europe.

‘Mr Stokes’s interest leads to an increasing attention focused on the artworks and educational programme at Carrolup. He shows the drawings to Max Praed, who writes a detailed article which appears in the Sunday Times on the 13th of July. This article, which is accompanied by a reproduction of one of the crayon drawings, refers to the interest shown in the boys’ art by Robert Campbell, Curator of the Art Gallery of Western Australia.

Max Praed outlines the educational approach adopted by Mr and Mrs White, who aim to develop ‘the expressive side of the children’s schoolwork by reawakening their love for drawing and design.’ In addition, they aim to foster the children’s talent for singing, encourage group or choral speaking, and teach the children folk-dancing. Max Praed continues:

‘Children who have become so enthralled with their art, singing and dancing are applying themselves with equal enthusiasm to the business of learning to read, write, spell and calculate.

Their art work is outstanding. Children draw their lessons before they attempt any written expression. They are still reserved and shy in oral expression, but this diffidence is gradually disappearing in an atmosphere of sympathy and encouragement.

Their hygiene lessons on cleanliness, teeth, the eyes, tobacco, wine, food, good manners and other subjects are beautifully illustrated in the “comic strip” style, with neatly printed explanations alongside in case the point of the sketch is missed.

History stories – the founding of WA, Lord Forrest, Eyre and others – are illustrated in a strip of episodes.

Their keenness of observation is amazing. Pictures of the timber and dairying industries, nature studies of the marron, the various birds in the district, the kangaroo, fox and rabbit, show how exact is their observation compared with white children.

When the drawings are completed, the young artists set to work to express those same ideas in English, thus helping to break down their usual inarticulate attempts at written expression.

Yet school lessons form only part of the day’s work. Carrolup is an institution with the children as boarders, therefore their social training is of pre-eminent importance to Mr. and Mrs. White.

Each evening the children join in community singing, games, dancing and so on. An amenities room has been promised by the Native Affairs Dept. to cater for this social training. Until this is erected, the school is being used.

Mr. and Mrs. White have every reason to be proud of their efforts, and the suggested exhibition may show that they have developed something of real value to the cultural life of the State.

It will certainly deserve careful consideration.’…

… Mr McBeath, Acting Commissioner of Native Affairs, sends a letter to Mr White on the 21st of July expressing his pleasure at reading the Max Praed article. He  congratulates Noel and Lily for the interest they have taken in the children of Carrolup.

A month later, Mr McBeath sends another letter to Noel White, asking him to thank the children for sending him a copy of the Lord Forrest Centenary Booklet. The gift is appreciated and greatly valued. He asks Noel if he would tell the children that he considers it a magnificent achievement that they won two prizes for their work. He goes on to say:

‘I  am very pleased, of course, and I believe all the people who visit the exhibition are most generous in their praise of the standard of the Carrolup children’s efforts.

Please tell the children to keep up their efforts, and always be industrious and of good behaviour, and that they will then find that they are respected by all sections of the community.’ Connection: Aboriginal Child Artists Captivate Europe. David Clark, in association with John Stanton. Copyright © 2020 by David Clark