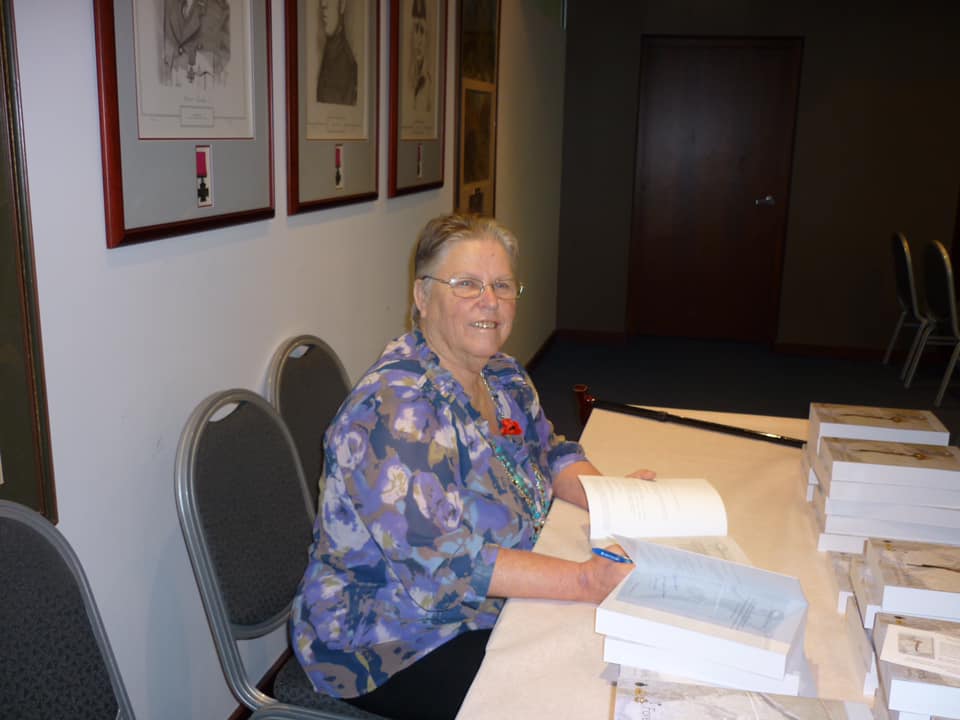 I am still struggling to come to terms with the fact that my close friend Jan James is physically not with us anymore. Jan passed away last Friday night, the 31st May 2019. She was one of the most extraordinary people I have ever known.

Here is a short biography that I wrote a few years ago about Jan for the Revel Cooper project that filmmaker Michael Liu and I were working on together. Jan was helping us research the life of one of the most talented and best known of the Carrolup artists.

‘Jan James was a genealogist, historian, counsellor and writer who over a period of nearly 40 years had assembled an unrivalled collection of Aboriginal records and photographs.  Her collection consisted of genealogies of 20,000 Western Australian Aboriginal families and included over 8,000 photos of individuals. Jan had written 14 books, including ‘Forever Warriors’, which contained biographical details and in most cases photographs of all Western Australian Aboriginal servicemen in all conflicts. She had been actively involved in helping Aboriginal families in counselling and justice processes for many years. In 2000, Jan was made an Honorary Noongar Elder and received an Aboriginal name, Kabarli, which means “Grandmother”. She was only the second white woman to officially be given this honour, the first being Daisy Bates.’

This summarises Jan’s very impressive career. As impressive as it may sound, it does not pay full justice to the enormous impact that Jan James had on the people around her and further afield in Western Australia, both Aboriginal and non-Aboriginal.

Take, for example, one aspect of her work with the Noongar people of Western Australia. How can we tell how large an impact Jan had on Noongar people by connecting individuals to their family members, past and present, through her genealogical work?

We know the shocking damage done to Aboriginal people by the white colonisers of this country. We now understand the nature of intergenerational trauma and its consequences. We know of the heartfelt pain that so many Aboriginal families felt when their children were taken as a part of government policy. We know the damaging impact separating children from their parents at an early age has on the development of their brains, and their future social and emotional wellbeing.

We know that a great deal of healing is needed. And one way of facilitating this healing is through connection – to family, country, culture, history and spirituality.

What Jan’s work did, in connecting Noongar people to family members past and present, through showing them their ancestry and/or family photographs, was to facilitate a healing process. It may not, in itself, have produced total healing, but it would have contributed in many ways to that process.

And it would have done more. When a person begins the healing process they start to behave in different (less damaged) ways. This can impact positively on other people, adults and children. It starts a process we call the ripple effect. Healing spreads out from one person to another, and can then eventually start to spread throughout a community.

I know that Jan provided genealogical information and photographs to many Noongar people —she told me stories of these interactions—so just imagine how many people she affected and how many ripple effects she generated.

And this was simply one element of her work.

I still have difficulty with the idea that Jan has physically left us. I almost felt that she was indestructible. She was certainly very resilient, in particular with her illness. And she had such a strong spirit. In her last months, when she was not well, she never let it seem to get to her. She was always so full of life, so highly motivated, so inspiring. She always had so much to do, but never stopped working. We always had much to talk about.

Not long before she left us, Jan asked me if I would bring John Stanton to meet her—they had never met—to discuss some important matters. He immediately agreed, but before I could plan the trip, Jan had fallen, hurt herself badly and was in a bad way in hospital. I was really worried.

Some days later, I spoke to her and she was well enough to discuss various matters. The next time I called, her daughter Heather told me she would be out of hospital that afternoon. ‘That’s it, Jan, nothing is going to stop you doing your work!’ I thought. I said I’d visit her at home two days later. I called the evening before, but Heather told me that she was being rushed back to hospital. Twenty four hours later, Jan James passed away.

Jan helped me so much with the work I’ve been doing over recent years since I first met her. Firstly, she became involved with the Revel Cooper project I was involved in with my close friend, filmmaker Michael Liu, and with Revel’s niece Cathy Coomer. Jan located all sorts of information, and we had many discussions via email, phone and in person. Information about Revel’s ancestry, his family, his passing, his place of burial—to name just a few.

Then, when I started to focus more on Carrolup, Jan provided me with a wealth of information about matters related to the Native Settlement, the Aboriginal people who were there, and the families who were directly affected.

Jan was a goldmine of information. When it came to genealogy and ancestry, her brain was like a computer. She never forgot anything—or rarely did. She would say to me, ‘I’m crap at other matters and forget other things all the time.’

I’ve been lucky to work alongside some very talented people in my career—including a Nobel Prize Laureate—but Jan is up there with the best. She was also special in helping many people. And she was one of the loveliest people I have ever met.

As some of you know, she never put up with humbug. It was one of her most endearing characteristics. She fought for her personal rights and, most of all, she fought tooth and nail, if need be, for the rights of those who were or had been taken advantage of by others.

I’ve included a film clip below of Jan talking with Cathy Coomer. It’s one of a number that Michael Liu filmed and edited when the three of us were visiting Jan. You can find the collection here. I will be putting these clips up on YouTube over the coming days.

Jan’s funeral will take place at Tooodyay Cemetery at 14.00 on Monday, 10th June.

I give deepest sympathies to Jan’s daughter Heather and all her family.

Finally, to that special lady from Northam:

‘Jan, I’m going miss our wonderful interactions, but I will never ever forget you. You will always be an inspiration. Thank you so much for your friendship.

And I promise that I will do my utmost to make the feature film about the Carrolup children and their achievements, as I always said I would.’