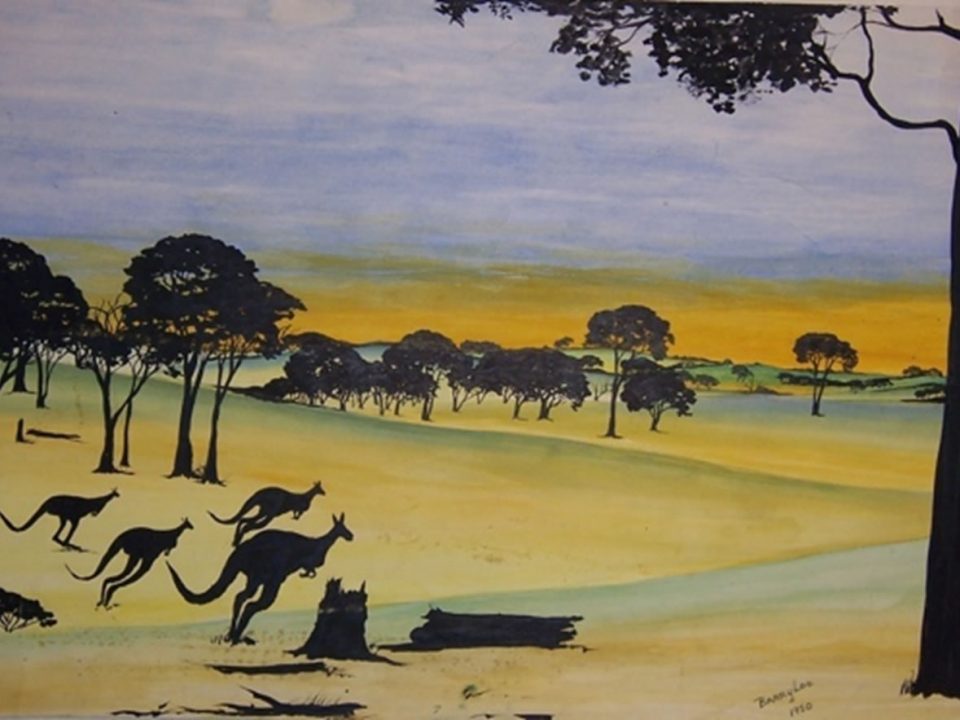 In my last blog, I revealed that the first exhibition  of the Carrolup children’s art organised in Europe by Mrs Florence Rutter took place in Apeldoorn, the Netherlands in June 1950.  I described how Florence kept a book of letters and comments from people who attended her Carrolup exhibitions in Europe which she later sent to Noel and Lily White. I included a letter written by Florence’s daughter Margaret Edenburg.

Here’s are sections from my book Connection: Aboriginal Child Artists Captivate Europe that highlight more letters that were written:

“The following extracts from this notebook show the impact the children’s art had on people in Apeldoorn and, for some of them, how it changed their perceptions of Aboriginal people:

‘The wonderful pictures of Mr and Mrs White’s pupils made a deep impression upon me. No one can deny that these pictures are of really artistic value. That the Aboriginals of Australia are capable of such artistic expression in colour and line was quite a surprise to me, for I must confess that I have always looked upon these people as an uncivilised and uneducated race. The pictures convinced me that I was absolutely wrong there and that people capable of completing such work can compete in culture with the rest of the world, if given a chance.

In showing the pictures of these children all over the world their energetic and enthusiastic advocate Mrs Rutter is giving them that chance. I hope sincerely that she will succeed in drawing the world’s attention to these children, for in doing so she will safeguard their future and further the cause of mutual respect and appreciation between people of different colour.’ [unclear] de Ouden, The Police Inspector, Apeldoorn, 12/6/50 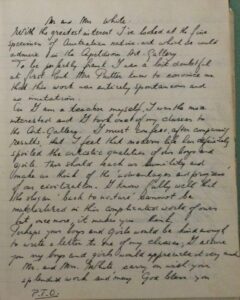 Main body of the letter from Mr J. G. G. J. Schut relating to the Carrolup children’s art shown in the Apeldoorn Exhibition of June 1950.

With the greatest interest I have looked at the fine specimen of Australian native art which we could admire in the Apeldoorn Art Gallery.

To be perfectly frank I was a bit doubtful at first but Mrs Rutter knew to convince me that this work was entirely spontaneous and no imitation.

As I am a teacher myself, I was the more interested and I took one of my classes to the Art Gallery. I must confess, after comparing results, that I feel that modern life has definitely spoiled the artistic qualities of our boys and girls. This should teach us humility and make us think of the ‘advantages and progress’ of our civilization. I know fully well that the slogan ‘back to nature’ cannot be materialized in this complicated world of ours but once more, it makes you think. 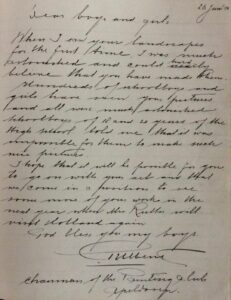 Letter written by the Chairman of the Apeldoorn Painting Club to the children of Carrolup, June 1950.

… The children receive a letter directly from the Appeldoorn Painting Club Chairman:

When I saw your landscapes for the first time, I was much astonished and could hardly believe that you had made them.

Hundreds of schoolboys and girls have seen your pictures and all were much astonished. Schoolboys of 18 and 20 years of the High School told me that it was impossible for them to make such pictures.

I hope that it will be possible for you to go on with your art and that we come in a position to see more of your work next year when Mrs Rutter will visit Holland again.

God bless you my boys.’ [Signature unclear], Chairman of the Painting Club of Apeldoorn, 26th June 1950