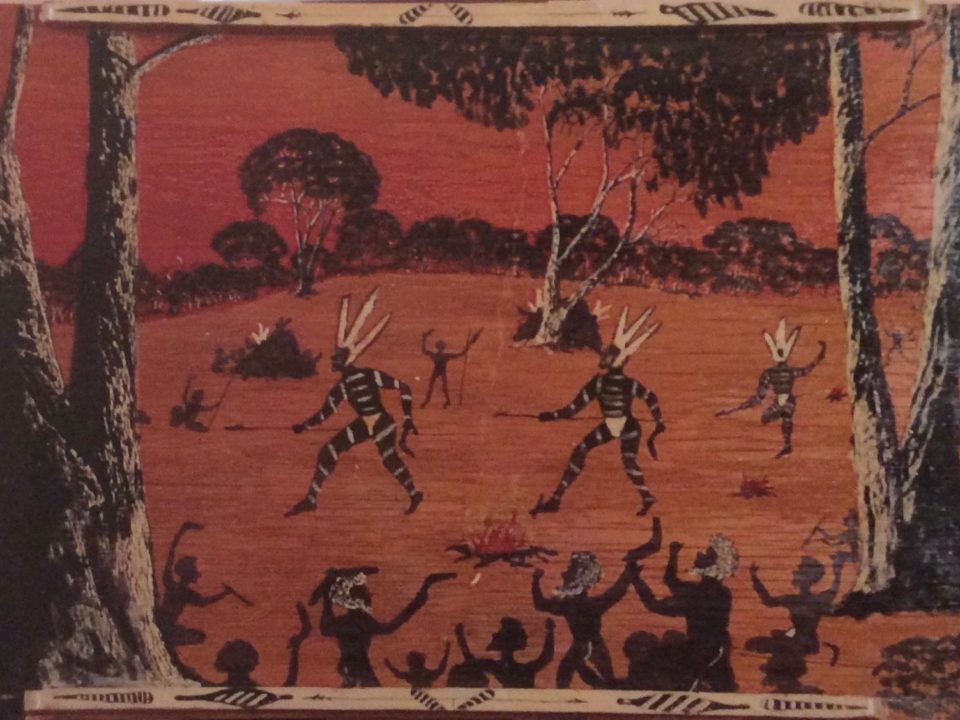 Tray created by Revel Cooper, c.1949. Submitted as an exhibit for the International Seminar on Rural Education sponsored by UNESCO held at Mysore, India, in November 1949. Noel & Lily White Collection, Berndt Museum of Anthropology, The University of Western Australia.

On the 19th of August 1949, the following article appeared in the Great Southern Herald newspaper:

‘The art of Carrolup native children is to be shown at exhibitions in various countries arranged by the United Nations Educational, Scientific and Cultural Organisation. Through the Education Department, 28 water colours, 34 crayon drawings and several specimens of stained woodwork done by the children of the Government school at the Carrolup Native Settlement under the supervision of the headmaster (Mr N. H. White) are to be sent to U.N.E.S.C.O. Their first display will be at an exhibition in India. This announcement was made by the Minister for Native Affairs (Mr Ross McDonald) recently.’

I’ve tried to find out more about the event in Mysore and have come up with the following. The United Nations Educational, Scientific and Cultural Organisation (UNESCO) is a specialised agency of the United Nations aimed at promoting world peace and security through international cooperation in education, the sciences, and culture. In 1949, UNESCO held two international seminars with the following aims:

‘… to make an intensive study of specific educational problems; to use the study group method on an international level; to prepare material for national and international use; to draw up plans for action in the home countries of the participants; and to experience living in an international community.’

The first seminar was held in Quintandhina, Brazil, and the second in Mysore, India, from 2 November to 14 December. The theme of the Mysore seminar was the problem of rural adult education, with special regard to illiteracy and health education. To both these seminars, UNESCO contributed by sending specialists, documentation and funds.

The Carrolup artworks sent to Mysore were returned to Noel White after the seminar, as at least three of the items (shown in this blog) are now held by the Berndt Museum of Anthropology at the The University of Western Australia (UWA). The tray shown above was once owned by Noelene White, daughter of Noel White, before she donated it to the Berndt Museum. You can see the other artworks, Dancing Figures by Reynold Hart and Landscape by Claude Kelly, in the Art Gallery section of this website.

It is wonderful to think that artworks of the Carrolup children were used by a major international organisation to facilitate education in India!