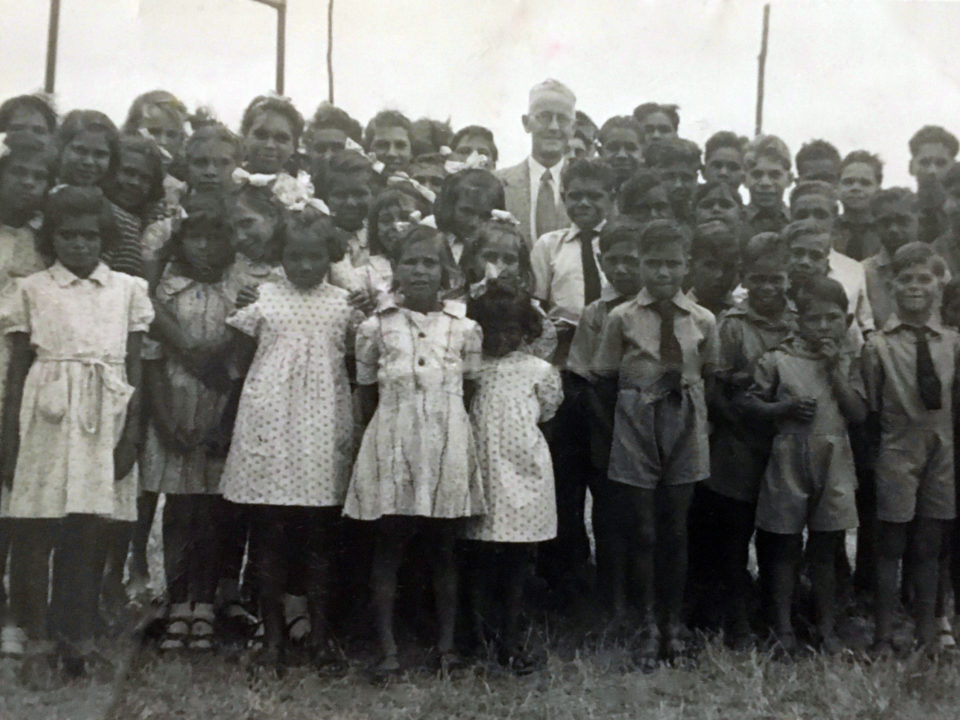 I first wrote about local Department of Education school inspector Charles ‘Sammy’ Crabbe back in March 2020. He played a pivotal role in helping Noel White connect with the Aboriginal children of Carrolup, and in the development and promotion of the Carrolup children’s art. Noel was a close friend of Noel and there is little doubt that he was emotionally close to the children and regarded them very highly.

I remember Noelene White fondly telling me the story of Sammy Crabbe suddenly leaving the classroom whilst hearing the children sing. Noel White followed the inspector out, thinking that something was wrong. After assuring his friend that nothing was wrong, Mr Crabbe, with tears in his eyes, said that he was deeply moved by the beautiful singing. He had never previously heard anything so beautiful. Noelene told me what she had heard—and later Cathy Coomer, a relative of Revel Cooper, and me—the children’s singing was beautiful.

Sammy Crabbe also played a major role in the Carrolup story by virtue of the letter he wrote in 1951 to Dr Kenneth Stewart Cunningham, Director of the Australian Council of Educational Research, describing the early development of the children’s art. This letter is one of the major finds of my early research with Michael Liu and Cathy Coomer of Mary Durack Miller’s Collection (ACC 3302A) at the J.S. Battye Library of West Australian History.

Through this letter, we learn a number of important facts about the development of the children’ art. First, the children’s artistic talents were not revealed immediately, as some people today have assumed. The children’s beautiful landscape drawings developed over a long period of time, as confirmed both by Carrolup artist Barry Loo.

‘How we, us boys came to do such beautiful art work of scenic and bush scenes is that we spent all our precious hours at school and weekends doing this work and three years of this took our art work to where it is today, and I say all honours are on Mr White who gave us that opportunity to improve our work…’ Letter from Barry Loo to Florence Rutter, 20th September 1950. In: Florence Rutter, Little Black Fingers, 1950, p. 9

I feel that to evaluate the Art work in its true perspective, we should see it was as only one aspect of a school curriculum that used drawing as the necessary means of communication in almost every subject. I regard the children’s love of singing, their choral work, dramatisations, their nature study rambles, etc, as part of the Art development. I claim that the teacher who tried to link all of his teaching with the life and interests of these children must have developed an environment that helped to release the creative urge in these children. If they had been taught their special studies, and skill subjects by humdrum methods, they would never have developed their spectacular work in art.’ Letter from Charles S Crabbe to Dr Cunningham, 27th June 1951, p. 4

Third, Mr Crabbe’s letter to Dr Cunningham tells us about the various stages of development of the children’s drawings. Fourth, it informs us that Noel White had ‘never drawn or painted a picture in his life.’  Mr Crabbe provides insights into how his teaching colleague helped the children’s art develop. Fifth, we learn that the children started to use water colours in 1948, thanks to one afternoon’s instruction by Mr Crabbe. Sixth, Mr Crabbe believed that ‘about 6 of the boys showed outstanding ability in Art.’

I should also mention that we get a clear indication from Sammy Crabbe’s letter of the problems that Noel White faced in those early days.

‘These were the main problems:-

(a) Lack of hygiene,

(b) Diffidence in speaking; extreme shyness,

When you read Mr Crabbe’s letter, a typed copy of which you can download here, you not only gain a good appreciation of how the Carrolup art developed, but also of the remarkable education and personal development programme that was developed at Carrolup. The impact of this programme is well appreciated by comparing the last quote above with that written by Mrs Florence Rutter after she visited Carrolup in early 1950.

‘During the three days we spent at Carrolup we were able to watch the boys both at work and play. Speaking for myself I must relate how delighted and surprised I was with their behaviour. In everyway they were exemplary – attentive, interested, appreciative, grateful, polite, unselfish, sporting and physically courageous. I hope that my own grandchildren will develop these traits as definitely as these little aboriginal boys.’ Florence Rutter, Little Black Fingers, 1951, p. 5 [Emphasis in original]

‘During the afternoon when they were drawing and painting with their crayons and paints, I noticed the boys sharing any colours with each other. These aboriginal children have the real spirit of community life – they are non-possessive and quite definitely non-acquisitive! The older boys appeared to take a pleasure in showing the younger how to do things. They are extremely intelligent and have remarkably retentive memories. Hence they learn rapidly and retain what they are taught.’ Florence Rutter, Little Black Fingers, 1950, p. 6 [Emphasis in original]