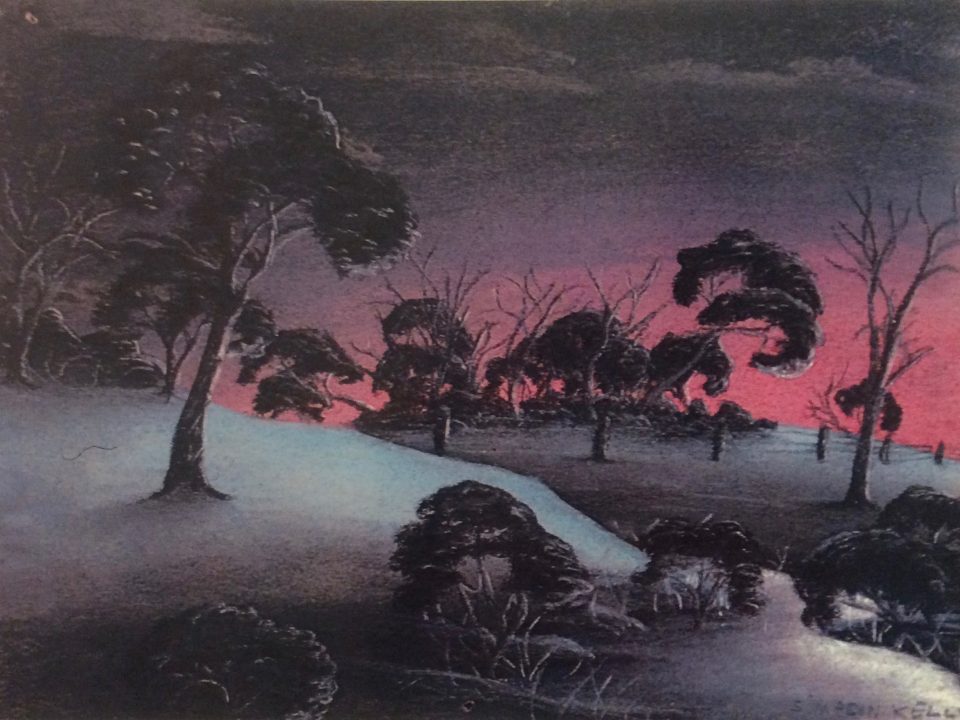 It is important to emphasise again that teacher Noel White was not teaching the children of Carrolup to draw from his own skills as an artist. He did not paint or draw. However, he no doubt influenced the children, as both Sammy Crabbe and he describe. The following is from my eBook, Connection: Aboriginal Child Artists Captivate Europe.

“Mr White states that he has never drawn or painted a picture in his life. But he showed particular ability in his methods: He would direct children’s attention to some crudity in drawing, some shadow neglected, some faulty observation and so persuade them to ‘look again’ at the tree or scene. He used the method of displaying several drawings and inviting discussion. Children examined Namatjira’s pictures (a few prints) and decided that Carrolup trees were better than those of their full blood friend.’ Letter from Charles S Crabbe to Dr Cunningham, 25th June 1951, p. 3

‘I influenced them to use their eyes in their heads. Sometimes I would take them back and back to the same place, even to the same tree, to see how things looked at different times of the day, in different lights. When they made their first tentative sketches of trees I would encourage them but I would suggest also that we went for another walk to find out more about the way branches grew from trunks and how foliage masses looked against the sky.’ Noel White, in M D Miller and F Rutter, Child Artists of the Australian Bush, 1952, p. 44

Eventually, Noel White realises that the children are noticing more detail than he himself does on the bush walks, commenting on the peculiar patterns of peeling bark, of tree hollows and bumps.

During night walks, they notice owls, possums and other animals, sometimes silhouetted against a full moon. As the children do their drawings on their return to the classroom after their walks, their visual memory is continually improving. The Whites are now feeling out of their depth in many of the discussions arising from the children’s work. Noel later comments that the children have ‘a wonderful sense of observation.’ Approach to School Work, Noel White’s Reflections. Noel & Lily White Collection.

Barry Loo later said of the development of the children’s art:

‘Mr White later would tell us to take an individual animal and illustrate everything we could about it and in this way we learnt to draw and sketch animals in all positions.

How we, us boys came to do such beautiful art work of scenic and bush scenes is that we spent all our precious hours at school and weekends doing this work and three years of this took our art work to where it is today, and I say all honours are on Mr White who gave us that opportunity to improve our work…’ Letter from Barry Loo to Florence Rutter, 20th September 1950. In: Florence Rutter, Little Black Fingers, 1950, p. 9″ Connection: Aboriginal Child Artists Captivate Europe. David Clark, in association with John Stanton. Copyright © 2020 by David Clark