How My Carrolup Journey Began 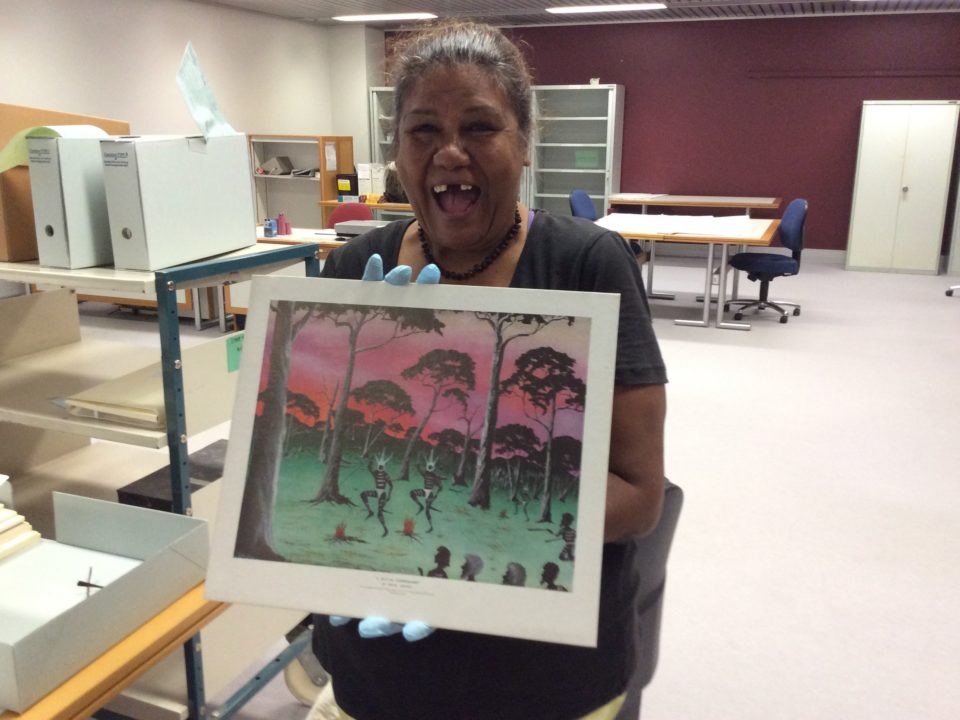 Cathy Coomer holding what we thought was a print of one of her 'Uncle' Revel's drawings at the Battye Library during our first visit to view the Mary Durack Miller Collection. Photograph: David Clark, 6th January 2016. We later found out that Mrs Rutter had been mistaken in considering this to be a Revel Cooper drawing. The original had in fact been done by Parnell Dempster.

‘When filmmaker and close friend Michael (Mike) Liu and I were first shown work of the Carrolup artists Revel Cooper, Parnell Dempster and Reynold Hart by our close Noongar friend Karen Hume in 2014, we were stunned by the beauty of these artworks and beguiled by the stories we heard.

Some months later, Mike by chance met Catherine (Cathy) Coomer, a relative of Revel Cooper, while he was fishing with his young son on Matagarup (Heirisson Island on the Swan River). Cathy told him that she had a copy of Uncle Revel’s papers from the State Records Office. Mike and I poured over these documents, fascinated by what we read. Cathy also told us how she had indeed met Revel Cooper in the late 1970s. He introduced himself and after asking who she was, told her that he was her uncle. Cathy’s description of this meeting brought Revel alive for us.

We met Patsy Millett, daughter of author and historian Mary Durack Miller, at a meeting of The Royal Western Australian Historical Society. Patsy suggested that we look through her mother’s papers at the Battye Library in Perth. In these box files, Mike, Cathy and I found a wealth of fascinating information, particularly about the Aboriginal children of Carrolup Native Settlement and their drawings.

Carrolup was one of the two Native Settlements set up in the South West of Western Australia by the State government, as part of their policy of removing Aboriginal children from their families. Revel related how Aboriginal children at Carrolup Native Settlement lived in squalor and fear during the first half of the 1940s. He described how teacher Noel White, who arrived in May 1946, gained the children’s ‘confidence and respect’, helped things improve at Carrolup, and facilitated the development of the children’s drawings.

Seventy years after Noel White and his family arrived at Carrolup, Mike and I visited Noel’s eldest daughter Noelene at her home in Perth. Noelene, who was 12-years old when she arrived at Carrolup, still had clear memories of her time on the settlement, including playing with the Aboriginal children. She showed us her family’s memorabilia relating to their time at Carrolup (and before and after) and brought the story of Carrolup alive for us. Mike filmed Noelene and I talking about the events of all those years ago.

I remember vividly one particularly poignant moment when Noelene said, ‘And my dad thought, and mum thought, that it [the story] was gone and lost forever.’

Noelene broke down and cried. I knew then that I had to write the story of the Aboriginal child artists of Carrolup. And Noelene of course encouraged me to do so. 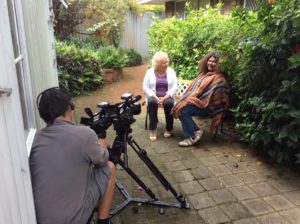 Soon after, Mike and I took Cathy over to meet Noelene and they quickly started to talk away like old friends. Mike filmed Cathy and Noelene having a yarn. It was a deeply moving experience watching Cathy look through Noelene’s photographs of Carrolup and other memorabilia. Cathy then started pressing me to write the book.

I pored over Noelene’s family’s treasures, as well as a variety of items that Mike and I had found at the Battye Library in Perth and other places. Mary Durack Miller’s files had revealed the name of Doreen Trainor, who we soon discovered (thanks, indirectly, to Google) also had a connection to Revel Cooper. Doreen had lodged a collection of papers at the Battye Library, so we were soon back talking to the helpful and friendly staff there. We learnt that Revel Cooper had been a prolific letter writer, and a large collection of his letters to Mrs Trainor were available amongst her files. One of our most important finds was a description of life at Carrolup written by Revel.

By now, the material we had researched for the Revel project had grown considerably. I really wanted to focus on the story of Carrolup and start writing a book. Mike’s primary interest, on the other hand, was in Revel Cooper and he wanted to focus on the artist’s remarkable life. We decided to split up our original Revel project, knowing that one day we might come together again to work on some part of this story, or on a related project.

I knew that the book I was to write had to use the ‘faces’ and ‘voices’ of the people of the time. The book had to be part of a wider project—there are many ways to tell and disseminate stories. I knew that in the future I had to develop a Carrolup story website, and work with film. The project also had to facilitate healing amongst Aboriginal peoples and enhance awareness in wider society. Huge challenges ahead!

Around this time, Mike and I met Social Anthropologist John Stanton, former Director of the Berndt Museum of Anthropology at The University of Western Australia. John had been appointed foundation Curator (later Director) of the Berndt Museum in 1978, a position from which he took early retirement in 2014. His application of museum-based anthropology focused on the empowerment of Aboriginal communities through assisting in the creation of local Keeping Places and Cultural Centres in different areas of Western Australia.  A key element of this aspect of John’s work was the Carrolup Project, which commenced in 1985 at the request of members of the Marribank Community (formerly Carrolup).

John and I immediately realised that with our shared passion for the story of Carrolup, and our complementary background and knowledge, we needed to be working together on a project focused on the Aboriginal child artists of Carrolup. In November 2018, we launched this website.

Like me, John believes that telling the story of Carrolup can facilitate the healing of trauma and its consequences (e.g. mental health problems, addiction) experienced by many Aboriginal people. Moreover, our work can enhance public awareness of the resilience and achievements of Aboriginal people in the face of great adversity, which will help reduce the prejudice and racism in wider society that are strong barriers to healing.

How can telling such a story facilitate healing? And why my interest in the healing of trauma? I’ll answer these questions in a future blog.’

This section is taken from the Preface of our forthcoming book, CONNECTION: Aboriginal Child Artists Captivate Europe. David Clark, in association with John Stanton. Copyright © 2020 by David Clark 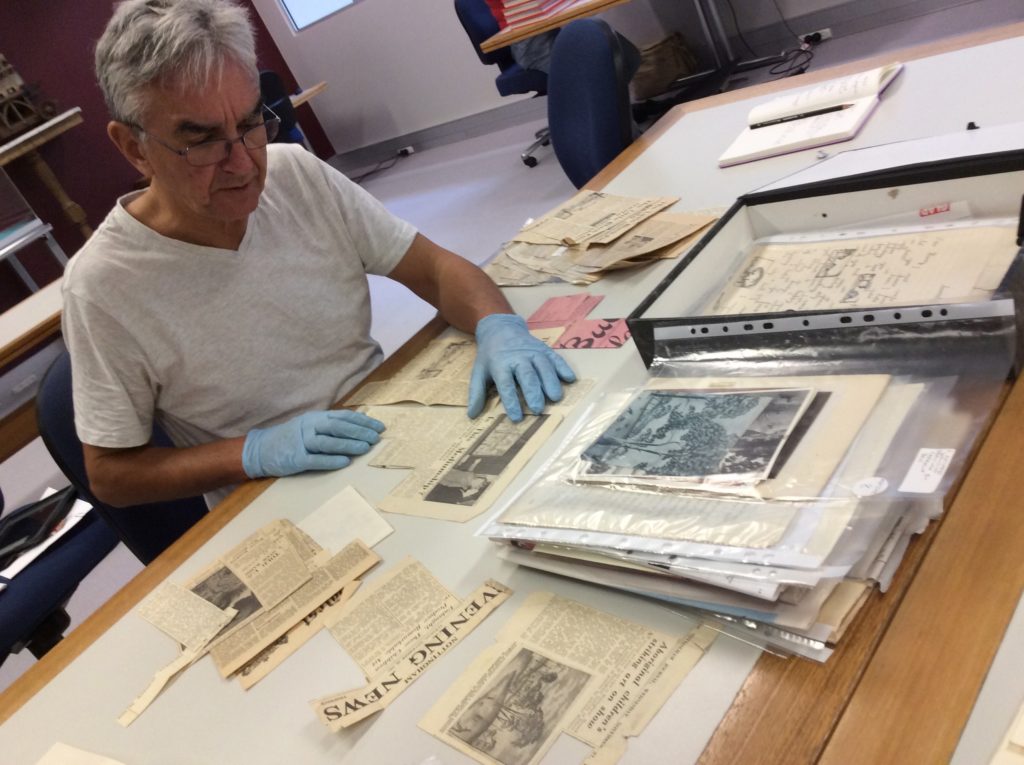