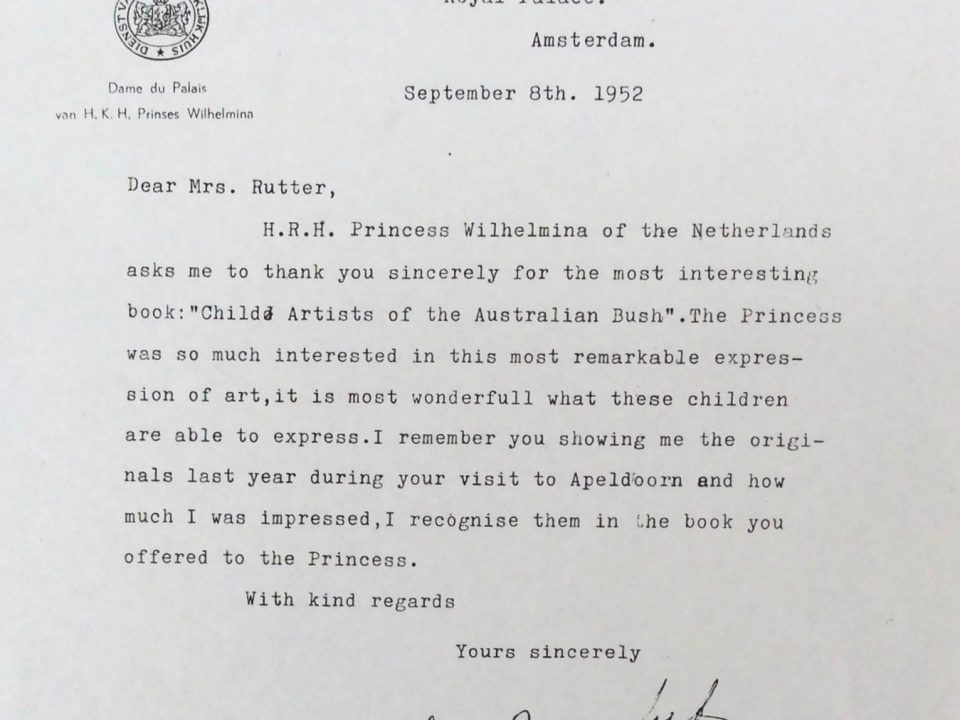 In the second half of the 1940s, the artworks of the Aboriginal children of Carrolup captivated audiences in the south-west of Western Australia and then in cities around Australia and New Zealand. In the early 1950s, audiences in the Netherlands, England and Scotland were captivated. Amazingly, staff from two Royal Houses wrote positive letters about the Carrolup artworks. Here is what I say in my eBook, Connection: Aboriginal Child Artists Captivate Europe.

“Noel and Lily White receive a letter dated the 30th of June 1952, from Constance Gaskell, who is Woman of the Bedchamber to Queen Mary. Queen Mary was the wife of George V during the time he was King of the United Kingdom and the British Dominions between 1910 and 1936. She was also the mother of George VI, who had passed away a few months earlier. She would die in March 1953.

The letter from Constance Gaskell reads:

Mrs Rutter has written to Queen Mary about the Carrolup Native Settlement & Her Majesty accepted one of the sketches done by an Aboriginal boy, & now Mrs. Rutter has sent the Queen a copy of “Child Artists of the Australian Bush” & Her Majesty is very much impressed with the remarkable work of these children, illustrations 12 & 13 are particularly beautiful, really like Chinese drawings. 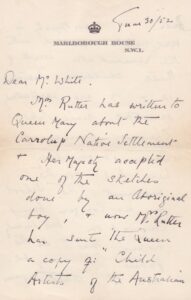 The Queen is very sorry to hear that for the moment the School is no longer being carried on, but sincerely hopes that in the future you may be able to start again on your most interesting work. Her Majesty is sending you a book by herself for the Carrolup Native Settlement Training Centre, this gift is a token of Queen Mary’s deep concern for the welfare of the Aboriginal children who come to the centre & Her Majesty’s hope that you will be able to start the Art Classes once more. The Queen would like to know if the boys showing such remarkable talent are able to go on with their drawing & painting.

The two drawings referred to in the letter are by Revel Cooper.

On the 17th of July, Noel White writes to Mrs Rutter to tell her that he will guard the book from Queen Mary very carefully and proudly, and will show it to the Carrolup boys [2]. He knows they will show unbounded delight. He will also show the book to the ‘Warden of the W.A. University’ [The University of Western Australia], who is most interested in the boys’ work.

‘How very grand to think the humble little boys should have their work admired by the Great People of our Mother Country. Yes Mrs White and I are overjoyed.’ Letter from Noel White to Florence Rutter, 17th July 1952…

… On the 8th of September 1952, Baroness de Beaufort, Lady-In-Waiting for Princess Wilhelmina of The Netherlands, writes to Mrs Rutter from the Royal Palace in Amsterdam:

H.R.H. Princess Wilhelmina of The Netherlands asks me to thank you sincerely for the most interesting book: “Child Artists of the Australian Bush”. The Princess was so much interested in this remarkable expression of art, it is most wonderful what these children are able to express. I remember you showing me the originals last year during your visit to Appeldoorn and how much I was impressed, I recognised them in the book you offered to the Princess.

There is little doubt that Florence would have written immediately to Mary Durack Miller and the Whites!” Connection: Aboriginal Child Artists Captivate Europe. David Clark, in association with John Stanton. Copyright © 2020 by David Clark.

Do you know of any children’s art initiative from anywhere around the world that received compliments from two Royal Houses?