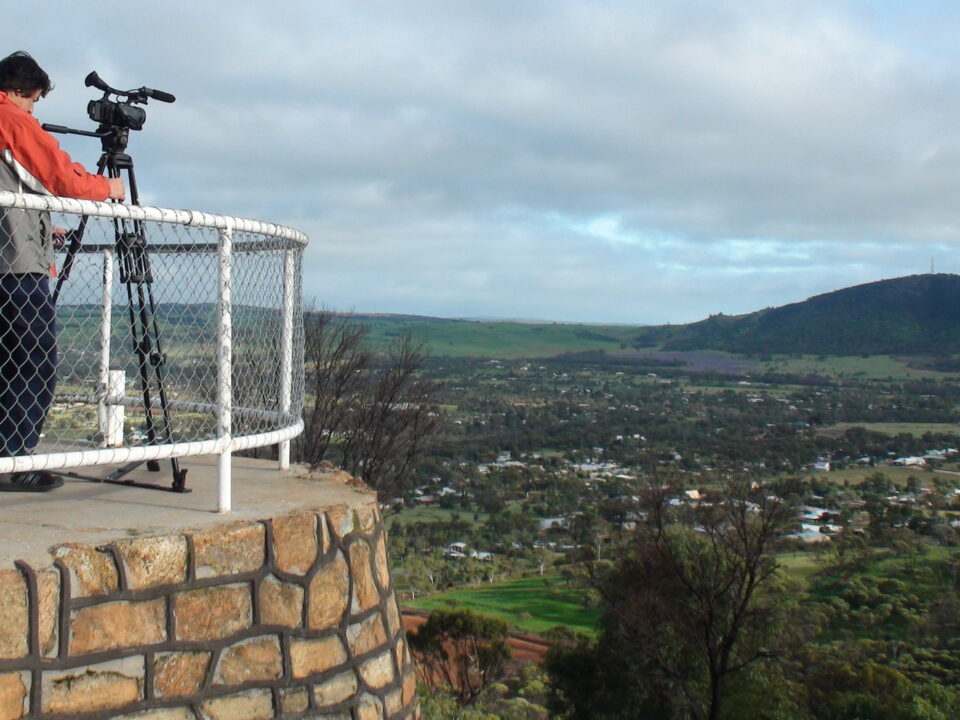 Michael Liu filming the countryside around York whilst he and I were working with Professor Marion Kickett. Photograph: David Clark, 13 September 2013.

I first became interested in Aboriginal culture and in Indigenous healing after reading Judy Atkinson’s wonderful book Trauma Trails: Recreating Song Lines – The Transgenerational Effects of Trauma in Indigenous Australia. I developed the educational initiative Sharing Culture which aimed to help Indigenous peoples heal from historical trauma. That website is still accessible, although I haven’t posted on it for some time due to me being so busy with other related activities.

I soon realised that western culture can learn a great deal from Indigenous culture and healing practices. I also learnt the key importance of connecting to culture for the healing of trauma and its consequences (e.g. mental health problems, addiction) amongst Indigenous peoples. I was lucky enough to spend a good deal of time with Marion Kickett, who at the time was a lecturer at the Centre for Aboriginal Studies at Curtin University in Perth, and through listening to her I learnt some important aspects of Indigenous culture and history. Marion is now a Professor and Director of the same Centre. She is a Noongar from the Balardong language group and spent the early years of her life on a reserve.

Marion asked my friend Michael (Mike) Liu and I if we would spend a day filming her on country talking about her culture and experiences, and various other related matters. We agreed and spent a day with Marion at various locations in York. It was quite an experience and we were amazed at how Marion kept going on from very early morning until late afternoon. Mike and I were buzzing by the end of the day.

We eventually edited 12 film clips (totally just over an hour) from filming that day, the first of which was posted on YouTube on 25 September 2013. The films were made available on the Sharing Culture website. Eight years later, they were posted in to two Healing blog posts of this website. Once we decided to set up a Kojonup section of the website, I realised that they needed to be included here in one post.

Marion’s Story is a pathway to facilitating more understanding of Aboriginal life experiences, culture and healing. They represent an extremely important educational resource for people of all cultures. I will always remain extremely grateful to Marion for the day that Mike and I spent filming her on country. The experience of that day and the films we posted have left a life-long impact on me personally. I hope they impact on you in the same way.

Marion’s Country & Dreaming: On a beautiful winter morning, Marion stands on Wongborrel hill overlooking York and talks about how her country and Dreaming Stories are an important part of  her identity. She often returns to this place to look at the land features and remember and reflect on the Dreaming Stories told to her by her father.  Marion feels a strong sense of belonging to York and its surrounds and emphasises, “This is where I belong.” (3’18”)

Connecting to Land: Marion was brought up on a Native Reserve just outside York until she was ten years old. Her grandparents lived there for 50 years. The reserve was eventually closed down and Marion moved into town. When she experienced racism in the past, Marion would come to the reserve and reflect on her past. She returns even now to recharge her batteries. Marion emphasises that her strong connection to this piece of land gives her strength. She has many happy memories of the reserve. (4’38”)

Early School: Her first year of school, aged five, was a real culture shock for Marion, as she had never really interacted with non-Aboriginal people. She entered a very foreign white world and struggled, particularly with not being allowed to use her native Noongar language. Marion had problems with her ears and couldn’t hear properly, resulting in her having to repeat Year 1 for being “a bit slow”. She basically hated school but her mother insisted she attend very day. (4’09”)

Dealing With Racism: Marion experienced racism at school and found this hard. In her first year, she was not allowed to enter a shop because ‘No dogs…  or natives’ were allowed. As a result of the racism at school, Marion became a fighter. When she stopped doing this and said, “Yes, I’m black. I’m very proud of it too”, the white children didn’t know how to respond. However, some of her relatives turned against her. She was now not accepted by either white society or Aboriginal society. (9’06”)

Life on the River: Marion describes how the river in York has been the life force for the Noongar community. It has provided drinking water and food (fish, ducks and turtles) – not now – and been a place of recreation. Marion relates how she and the other Noongar children would try to catch djuggies by using a shovel or by the traditional way, covering one’s hand in mud and plunging it into the hole. If they managed to catch a fair-sized djuggie, they would keep it. (2’23”)

Protecting Family: Marion’s grandfather was like the custodian of the Native Reserve. He had successfully managed to keep his family together, although he had once had to go down to Carrolup to ‘retrieve’ one of Marion’s aunties from the mission to which she had been sent. He always resisted government officials and did not trust them. Marion remembers the reserve kids hiding behind her grandfather as he met officials visiting the reserve.  She felt his fear and stress at these times. (3’39”)

Life on the Reserve: Marion learnt to be cautious on the Reserve, something she picked up from older children. She read when violence was going to occur during drinking sessions, and whether visitors should be avoided. Marion describes great sadness when her cousins were removed from the Reserve and sent to a mission by government officials. A strong bond existed between people on the Reserve. They felt they belonged and many still visit with their families today and tell their children stories. (5’55”)

Ruby’s Healing Story: Marion tells how Ruby was taken from her mother and trained as a domestic. She was raped on the station to which she was sent, and gave birth to a child who was removed. This did not happen just once… Ruby married and had three children. Alcohol numbed the pain of losing her first children and Ruby developed a drinking problem. She was imprisoned for manslaughter, but eventually overcame her problems. She needed to forgive before she could begin healing. (9’43”)

Shocking History Impacts on Health & Wellbeing: Marion relates how she and the other Noongar children in York were not allowed to swim in a particular area of the river.  When she was fifteen, her father described how he and his friends were similarly told by their parents not to swim in that location. He also related the shocking story of The Sandy. During her nursing career, Marion saw how such terrible past events have created fear in many Aboriginal people today and influence the way they behave in health settings. (9’05”)

Forgiveness, the Path to Healing: Marion relates how she read an article called ‘The Body Snatchers’ which described how the bones and skulls of Aboriginal people had been shipped to museums abroad. This article really impacted on her, particularly as she had dismissed what her father had told her about past events. Over the next years, Marion came to realise that she had to forgive non-Aboriginal people for the terrible things they had done in the past. It was the only that she could move forward in her life. (4’59”)

Living in Two Worlds: Marion has always been asked why she is successful at living in two different cultures and how has she overcome her adversities and challenges? Some white people marvelled at how she openly talked about her Aboriginal culture and family. Others told her that she didn’t have the usual ‘chip’ on her shoulder. They didn’t consider her to be Aboriginal. Marion found this to be very offensive. She replied, ‘Well, I am Aboriginal, and I am very proud to be Aboriginal.’ (5’54”)

Not Bad for a Reserve Kid: Some Aboriginal people have told Marion that she thinks she is white or wants to be white. They have questioned whether she had been fostered by white people. Her family have often had to say that she was a Reserve kid. Marion points out that some Aboriginal people are jealous.They have become internally oppressed and need to put down others. Some have become victims and pity themselves. Her father always told her that being a victim is a weakness. She should never become a victim. (3’41”)