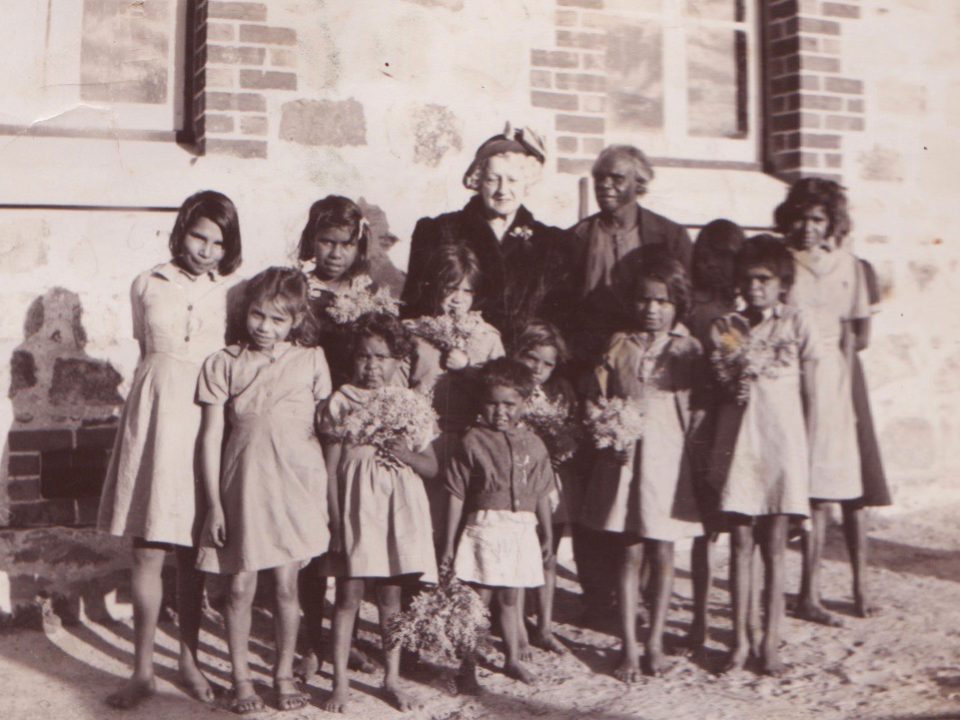 One of the fascinating elements of the Carrolup Story is that the Aboriginal child artists had an ‘ambassador’ for their work, a 71-year old Englishwoman, Mrs Florence Rutter. Mrs Rutter was given permission by the Western Australian government to exhibit and sell the children’s art, first around Australia and New Zealand and then in Europe (UK and The Netherlands).

But who was Mrs Rutter and how did this situation arise?

We know little about Mrs Rutter’s early life, but Margaret Edenburg—who John Stanton knew in her later life—briefly described some of her mother’s life in a book entitled Her Beloved Carrolup:

‘Poor, battered London was suffering the effects of the constant bombing by the Germans in the Second World War. Number 118 Baker Street comprised my Mother’s two businesses and at the back, in David Mews, was her private home housing herself, her twin children (my brother Laurence and myself, Margaret), and one domestic servant. Mother conceived the idea of a beauty salon for her three daughters, and she also had a made-to-measure corsetry service, the salon being named ‘The Beauty Casket’ and the corsetry ‘Beautilyne’. Both, unfortunately, came later on to an abrupt end, the former through being under-capitalised and the latter through a complete stoppage of materials through war shortage.’ Margaret Edenburg, Her Beloved Carrolup, 1987, p. 1

Mrs Rutter was Founder President of the Central London Soroptimist Club. Soroptimist Clubs are complementary to the Rotary Clubs for men, and the first one was founded in California in 1921. The motto of the organisation is ‘Hold the Right Thought’ – in other words, ‘Think Positively’.

In 1946, Mrs Rutter decided to visit her two sisters in Australia and whilst there look into the state of Soroptimism ‘Down Under’. She arrived in Melbourne in December 1946 and visited Perth in July of the following year when her ship berthed on the way back to the UK.

In early February 1949, now almost 71 years of age, Mrs Rutter set off for Australia again.  She intended to set up new Soroptimist clubs in Australia and New Zealand.

Here is an abbreviated version of her trip to Western Australian, taken from our forthcoming book The Aboriginal Artists of Carrolup.

“In July 1949, Mrs Rutter heads to Perth where she starts recruiting members for a new Soroptimist club and a Charter Dinner is soon arranged for over seventy people to take place in early August.

Whilst in Perth, Mrs Rutter reads an article by Muriel Weike in the magazine Milady that publicises the Carrolup Native Settlement and reproduces some of the boys’ art.

‘I was so thrilled with the beauty of the drawings, and with the wonderful skills shown by these natural young artists, that I determined at all costs to visit the Settlement, not only to meet some aboriginal children, but to buy some of their work if available.’ Florence Rutter, Little Black Fingers, 1950, p. 1

Mrs Rutter leaves Perth at 7.30 pm on Saturday, the 30th of July to travel by train to Katanning. After a very cold, uncomfortable and sleepless journey, she arrives at her destination at 06.15. Fortunately, her hotel is close to the station, and although everything is in the dark, she finds her room and awaits breakfast.

Mr and Mrs Courtis, who Mrs Rutter had met at the Savoy Hotel, drive her out to the Carrolup Settlement in the afternoon of the 31st of July. There, she receives a kindly welcome from Noel and Lily White, who describe their experiences with the children and show her over the schoolrooms:

‘… the walls of which, to my utter amazement, were covered with pictures – colourful and beautiful – of animals, landscapes, seascapes and designs, drawn on odd pieces of paper. Many had a picture on both sides of the paper – owing to the shortage of paper! There were many sizes, from little designs 5 x 4 inches done by the young children, and some quite large landscapes measuring 24 x 30 inches, the work of the older boys.’ Florence Rutter, Little Black Fingers, 1950, p. 1

Some of the gorgeous designs that Mrs Rutter sees are done by girls under the age of seven years.

As it is a Sunday afternoon, there are not many children about. Fortunately, however, Reynold Hart and Parnell Dempster drop into the schoolroom while Mrs Rutter is looking around. She asks them to point out the pictures they have done:

‘… for I wanted to have one done by each. They are very modest about their ability – very shy and very polite. I found it hard to make a choice for all were so attractive in colouring, so perfect in perspective, and so masterly in drawing. What a collection! The work of untaught aboriginal children! It was an amazing scene which will live long in my memory! Eagerly I bought a representative collection.’ Florence Rutter, Little Black Fingers, 1951, p. 2

Before she leaves, Mrs Rutter is photographed with a number of little girls, aged between three and 12 years old, and 68 year old Rudy Dinah, who is daughter of ‘King’ George Jerong Dinah of Wagin. She is also photographed with young Parnell Dempster and Reynold Hart, Noel and Lily White, and Mr and Mrs Courtis.

Mrs Rutter expresses concern at the conditions of the few children she saw during this short visit:

‘On my first visit of only 2.5 hours, I had only been shown the school house, and met very few of the boys and girls. Only one boy and one little girl had shoes or stockings (and that was in mid-winter, July!). They were scantily clad in garments that were badly in need of washing and darning, obviously no under-garments at all. Many had outgrown their clothes, poor neglected little children, not very clean – their hair sadly in need of washing and brushing. Yet, the little girls when they knew they were going to be photographed ran off and picked some wattle – a lovely Australia blossom – to “look nice”. Sweet innocence of childhood! Quite unselfconscious of any deficiency, they posed quite happily.’ Florence Rutter, Little Black Fingers, 1950, p. 4

Florence heads back to Perth on the overnight train the following day, and experiences another wearisome and sleepless journey. It is not much fun on a rocking, noisy train that takes eleven and a half hours to travel 175 miles (280 kms).

‘However, this time I had the joy of looking at my pictures and puzzling over the mystery of how these children could design and colour in this remarkable way. Their animals and birds were so alive, their designs so unusual, and their colours so vivid – from such cheap crayons! Their landscapes, too, showed such atmosphere, that the more I looked at them, the more astonished I became!’ Florence Rutter, Little Black Fingers, 1950, p. 2″