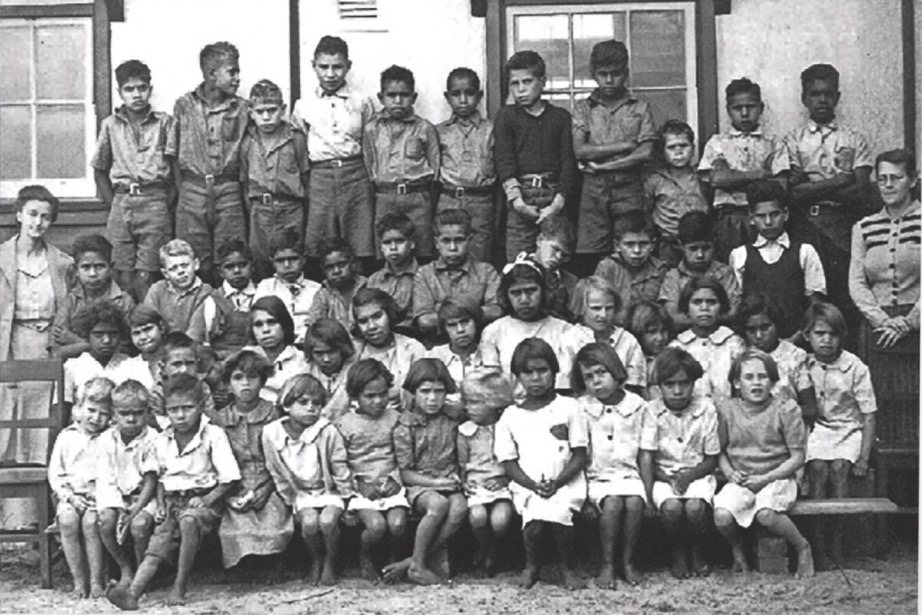 In my last blog, I referred to a written description by Revel Cooper [1], one of the Carrolup child artists, about life on the native settlement before teacher Noel White’s arrival in May 1946. Revel also writes about teacher Olive Elliot, who arrives after the Carrolup children had no teacher for a long period.

“Things improve for the children and they become better behaved when qualified teacher Mrs Olive Elliot arrives at Carrolup, along with teaching assistant Miss Blond, at the end of January 1945 (The Daily News, 31st January 1945). This is the first time that the Education Department has been in charge of teaching at Carrolup. Mrs Elliot has many years of experience working in remote and regional schools from the late 1920s.

Mrs Elliot reports in the School Journal that 30 children, of varying ages up to 13 years old, are enrolled on the opening day of school [2].

Mrs Elliot and Miss Blond initially grade the children, deciding that those who can read attend the main schoolroom, whilst the remaining ten attend the smaller classroom with Miss Blond. In the School Journal, Mrs Elliot says the children:

‘… seemed interested in all subjects except arithmetic. I found them fair in spelling, good in writing, hopeless on numbers and oral speech, fair in reading (except in 13 grades), good in drawing (exceptional in 1 or 2 cases) and with the exception of about 5 or 6 quite hopeless in written composition. They have no idea of sentence structure (capital & fullstop).’

Miss Blond has to leave the school in mid-February due to chicken pox, and Mrs Elliot starts teaching all the children in one room.  She disciplines the children with  the cane.

‘Have had to use the cane frequently this week to keep order. Small ones constantly talking.’ Olive Elliot, School Journal, 14th February 1945

Revel notes in his reflections on Carrolup that the children became interested in their schoolwork after Mrs Elliot’s arrival, but not in hygiene.

‘During the stay of a particular lady teacher things started to change for the better. We became more interested in our school work. Hygiene was introduced, which we promptly ignored. We dreaded soap an water.’

‘Claude Kelly is a child who is very easily excited beyond control. Lost his head in quarrel with Maude Cooper. Sent him out of room in the end & made him make up time the following week. Two other boys who are always in similar trouble are Burgess Williams & Revel Cooper although practically all are likely to start a fight if any child looks at them at the wrong moment. They appear to lack understanding of each other – whole mental attitude is too self centred and the inferiority complex seems very evident. They are intensely jealous of each other. While this can be used as a lever to improve their own work it also acts as a cause for a fight if the child beside them is always better. They are only interested in the child inside them!!’ Olive Elliot, School Journal, 22nd June 1945 [3]

However, despite these satisfactory exam results and her positive feelings for the children, Mrs Elliot comes to believe that with the problems of hygiene and discipline at Carrolup, the task at hand is beyond the power of a woman, in particular one like herself who has one young child living with her and two older children at boarding school. She decides that the school needs the firm hand of a male teacher.” CONNECTION: Aboriginal Child Artists Captivate Europe. David Clark, in association with John Stanton. Copyright © 2020 by David Clark

[3] The behaviours described by Mrs Elliot are signs of trauma, as discussed in Chapter 64 of our book.