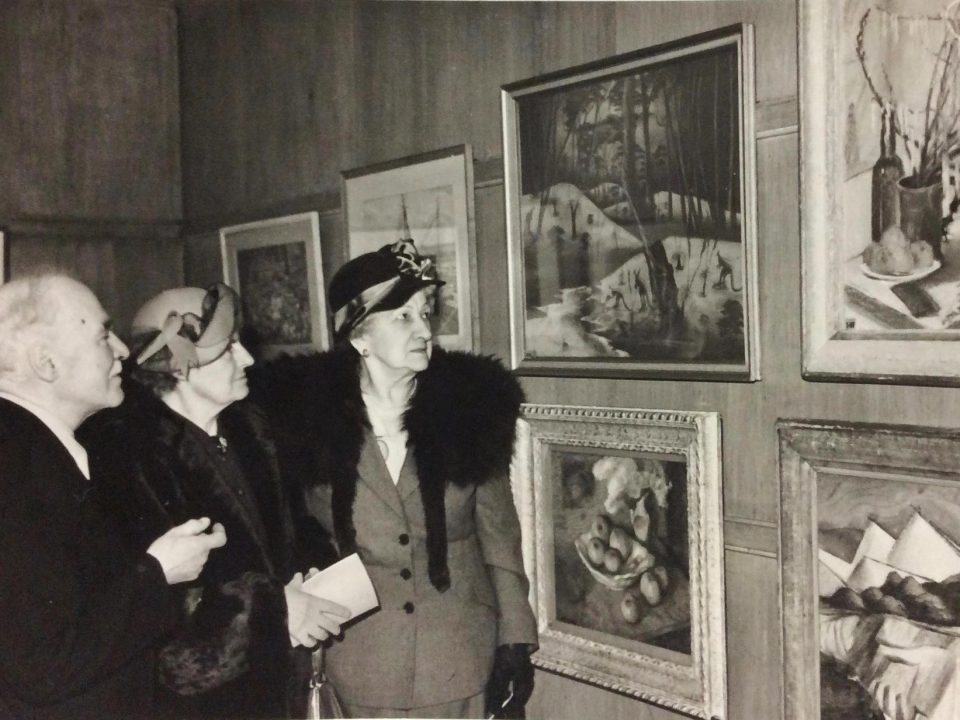 A pastel by Parnell Dempster adorns a wall at the Pastel Society in London in 1951, proudly talked about by Mrs. Rutter.

Today, I thought I’d try a novel approach to help me decide what I should write about from our book Connection: Aboriginal Child Artists Captivate Europe for this blog. I had an online random number generator select a number from 1 to 65 and I had to chose a part of the text from that number chapter. Using this approach, my selection had to be made from Chapter 43, Mrs Rutter in England.

Carrolup Native Settlement School was closed by the Department of Native Affairs in December 1950. Noel and Lily White were devastated by this decision. At this time, Mrs Florence Rutter was exhibiting the Carrolup children’s art in Europe, permission having been given by the Department of Native Affairs. The children’s artworks had already been acclaimed at exhibitions in Appeldoorn (Holland) and London (England).

When Mary Durack Miller in Perth heard the news of the school’s closure, she immediately contacted her good friend Florence Rutter. This is what happened in England in the few months after Mrs Rutter received Mary’s letter.

“Mrs Rutter responds to the news of Carrolup School’s closure by writing to the Times Educational Supplement. Her letter appears on the 5th of January 1951.

‘Sir, – Since your paper showed interest in the Aboriginal children at Carrolup Native Settlement, by reproducing some of their drawings in your issue of December 1, I should like to let you know what has just happened there.

Mr White, the teacher at the settlement, has been informed that the Commissioner for Native Affairs intends to close the school, send all the boys under 12 to missions, retain the older boys, and develop Carrolup as an Agriculture Training Centre. This is quite contrary to the policy that was explained to Mr. White and myself in the Commissioner’s office last January. It was then said that the boys would remain at school until 16, when they would be encouraged and equipped to continue with their art.

I am deeply concerned that these most gifted artists are to be taken away from the teachers who have been so successful in developing (though not teaching) their art. When one considers the very high standard of their work up to 14 years of age, surely something should  be done to prevent this happening and to safeguard their beautiful art.

Mrs Rutter is asked by the President of the Pastel Society, Mr H. David Richter, to send in one of Parnell Dempster’s drawings, Down to Drink, to be exhibited at the 45th Annual Exhibition of the Pastel Society at Piccadilly, London in January 1951. Mrs Rutter notes on the back of the photograph, it’s ‘a proud day for Parnell!’ [You can see the original colour version of Down to Drink in our Art Gallery]. 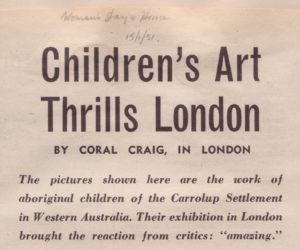 An article about the Carrolup children and their art appears in Psychic News on the 13th of January, entitled Is This Mediumship? [1]. This article contains a photograph of Mrs Rutter showing one of Reynold Hart’s pictures at the exhibition in King’s Weigh House in London the previous month.

On the 15th of January, Woman’s Day & Home publishes Children’s Art Thrills London which presumably is referring to the exhibition in King’s Weigh House [1]. The article highlights Parnell Dempster and his work.

The Carrolup pictures are exhibited at the Cheltenham School of Art for two weeks of the same month [2]. On the 23rd of January, a group of members of the Cheltenham Teacher’s Guild ‘met to discuss the significance of the remarkable pictures which surrounded them.’ [Gloucester Echo, 24th January 1951] 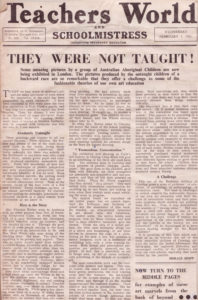 ‘Pointing out that art was a language used by children to fulfil their need to express themselves freely, Mr Richards [Principal of Oakley Training College for Men] declared that the curriculum of our primary schools often failed to give children enough opportunities to express in art the richness and variety of their experience…

Mr R S G Dent, Principal of the School of Art, maintained that their work revealed the influence of the best kind of teaching – the encouragement of the children to consider and re-express their personal experience.’

An exhibition of Australian Aboriginal Children’s Art takes place at Foyle’s Art Gallery in Charing Cross Road, London, between the 31st of January and the 3rd of March [please see below]. Howard Shipp covers this exhibition in a two-page article in Teachers World and Schoolmistress, the first of which is entitled They Were Not Taught. He says:

‘Some amazing pictures by a group of Australian Aboriginal Children are now being exhibited in London. The pictures produced by the untaught children of a backward race are so remarkable that they offer a challenge to some of the fashionable theories of our own art education….

… The typical result we produce on our centre pages; but we cannot reproduce the brilliance and harmony of colour nor the abundance of this work. No teacher, no educationalist interested in art should miss this exhibition.’ 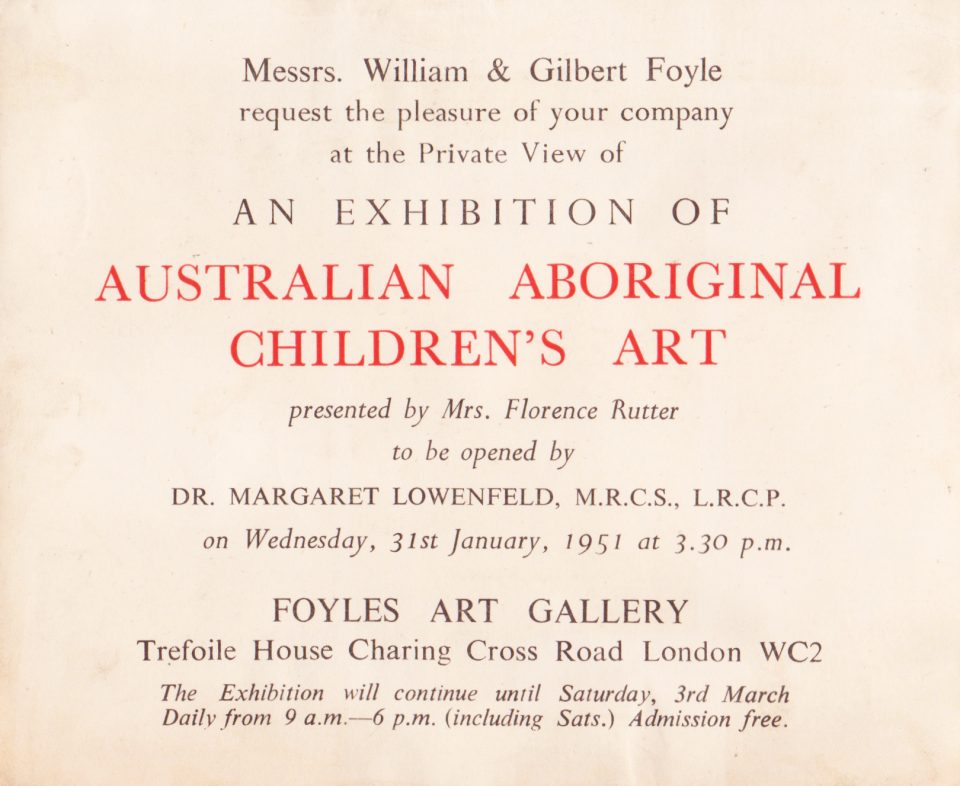