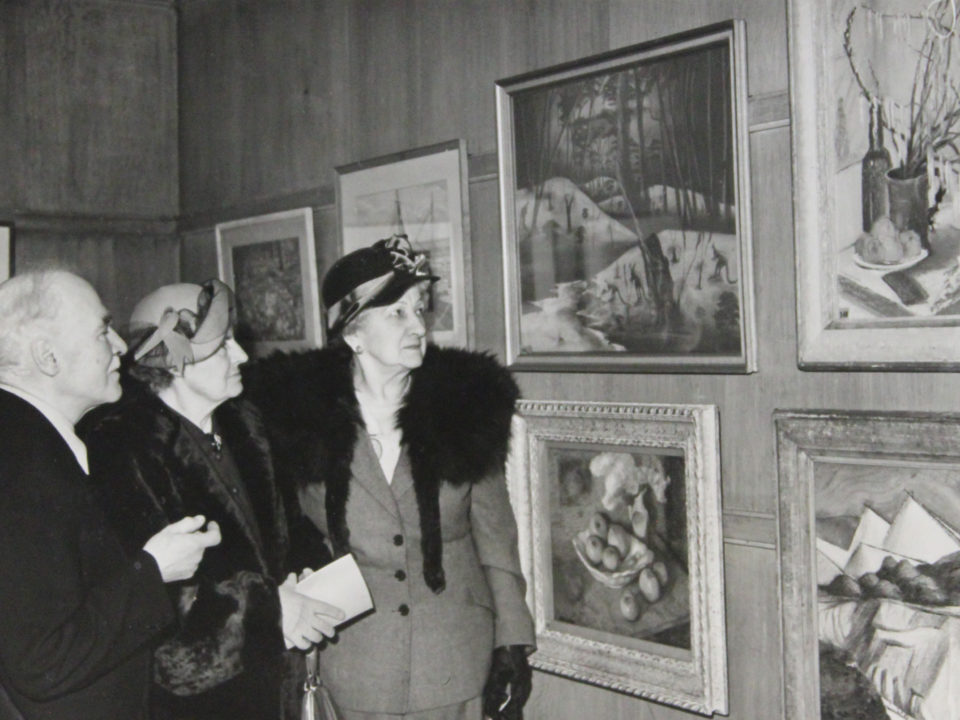 Mrs Florence Rutter visited Carrolup Native Settlement twice in 1949-50. She then exhibited the children’s art in The Netherlands, England and Scotland, to great public acclaim, between 1950-52. During her time in Western Australia, Florence befriended Mrs Mary Durack-Miller and the two corresponded for some years after she returned to England. They published a book together, Child Artists of the Australian Bush. When Florence passed away in early 1958, Mary wrote this obituary for her great friend:

Soroptimist Mrs. Florence Rutter, who died in London recently, will be remembered here not only as the founder of Australasian Soroptimist Clubs for business women, but for her unflagging interest in the welfare of the young coloured people of this State.

Although widowed when young with four children to support and no training whatever for a career, she quickly made a name in London as an organiser and built up a successful business.

Forced to close her business during the war, she turned the force of her energies to welfare work. 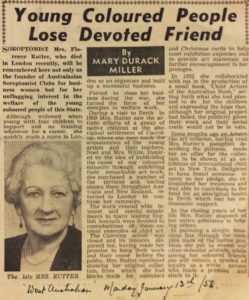 During a visit to Perth in 1950 Mrs. Rutter saw the artistic talents of a group of native children at the Aboriginal Settlement of Carrolup, where she soon made the acquaintance of the young artists and their teachers, Noel and Mrs. White. Inspired by the idea of publicising the cause of our coloured minority through exhibiting their remarkable art work, she purchased a number of the pictures and, having shown them throughout Australia and New Zealand, returned to London to continue her campaign.

The work created wide interest and special supplements in many leading English journals were devoted to reproductions of these unusual examples of child art.

The Carrolup school was closed and its inmates dispersed but, having made her promise to keep their work and their cause before the public, Mrs. Rutter continued showing her original collection, from which she had blocks made for calendars and Christmas cards to help meet exhibition expenses and to provide art materials as further encouragement to her protégés.

In 1952 she collaborated with me in the production of a small book, ‘Child Artists of the Australian Bush’, setting forth what she had planned to do with the children and expressing the hope that, although her original project had failed, the publicity given their work and their social needs would not be in vain.

Some months ago an American art collector, having read Mrs. Rutter’s pamphlet describing the pictures, made her an offer for the collection to be shown at an exhibition of international child art in New York. Delighted to have found someone to carry on her pledge, she relinquished her treasures and was able to contribute to a fund for an Aboriginal hostel in Perth which had her enthusiastic support.

In the closing years of her life Mrs. Rutter disposed of her entire substance in helping others.

In pursuing a simple, tenacious line through a complex maze of the native problem she put to shame our often defeatist attitude, while among her coloured friends she will remain a symbol of loyalty as a white person who made a promise and stuck to it.’ The West Australian, 13th January 1958 [Emphasis in original]