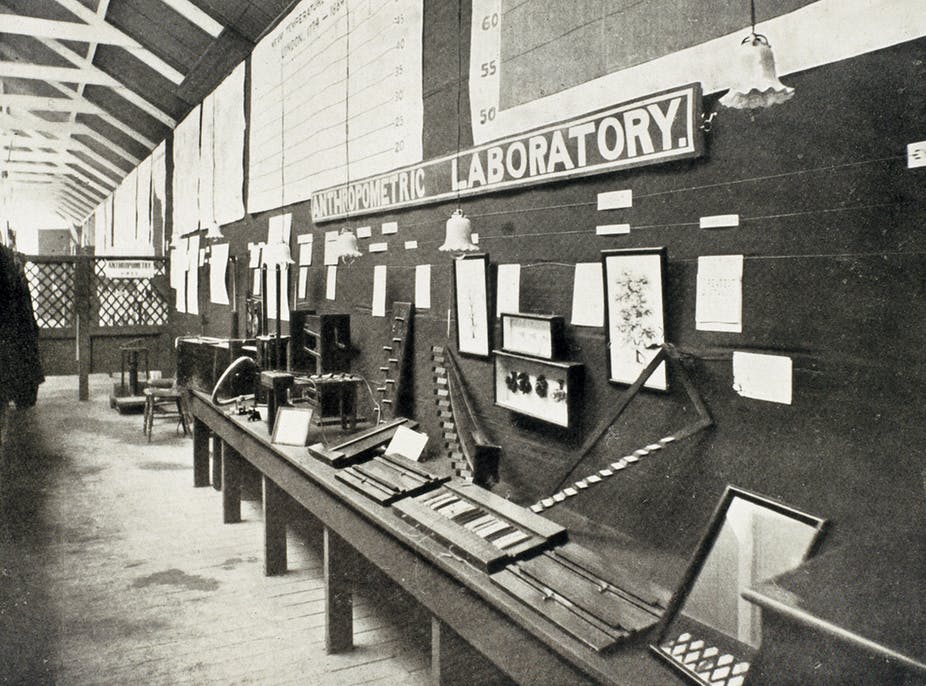 Francis Galton pioneered the concept of eugenics in this laboratory in London in the late 19th century. Flickr/Science Museum London

This is the third of a series of articles focused on the social, political and cultural context in which the story about the Aboriginal child artists of Carrolup took place. [Please note, some people may find the ideas described in this article to be upsetting and offensive].

A foundation underlying Western Australian government policy, and the attitudes of settlers, during the nineteenth century and well into the twentieth century, was Social Darwinism. This pseudo-scientific theory purports to explain the existence of ‘superior’ and ‘inferior’ races, the former being able to overrun the latter with greater energy and mental ability. ‘Inferior’ races are unfit and should not be aided in the struggle for existence.

Social Darwinism also spawned its own solutions to the problem of ‘inferior’ races and social groups. Francis Galton introduced the idea of eugenics, believing that the human race could help direct its future by selectively breeding individuals who have ‘desired’ traits. Eugenicists advocated a system that would allow the ‘more suitable races or strains of blood’ a better chance of prevailing speedily over the ‘less suitable’.

Many colonialists in Australia believed that it was nobody’s fault that Aboriginal people were dying, it was just an inevitable part of the process of human evolution. The fittest survived, while the weaker race became extinct.

What the white settlers could do was make the ‘passing’ of Aboriginal people as ‘comfortable’ as possible. Thus, the ‘need’ for the Aboriginal Protection Board, set up in 1886, to help supervise the distribution of rations and medical care to destitute Aboriginals.

‘All we can do is protect them as far as possible and leave nature to do the rest. It is the case of the survival of the fittest but let the fittest do their best.’ C A Piesse, Western Australia, Parliamentary Debates, 28, 1905, p. 433

Eugenicists also focused attention on the menacing problem of the ‘half-caste’. Children of a mixed parentage were widely thought to represent the worst characteristics of both races. The number of children of mixed parentage was rapidly increasing in Western Australia, with over half of the Aboriginal people in the south of the state being of mixed race at the turn of the century.

A growing fear developed amongst the white population that this ‘half-caste’ population would breed up to become a social menace. It was feared that they would be more black than white in their outlook, threatening established white moral and social standards. As they increased in numbers, they would also increasingly threaten white interests.

Of course, the ‘half-caste’ was also a clear sign that white people were breaking the social taboo of having sexual relationships with black people. Later, this taboo would turn into law. Miscegenation, interbreeding of people of different racial types, would be outlawed.

Racist attitudes towards Aboriginal people were frequently expressed in newspapers, such as in this editorial entitled A Dying Race.

”The survival of the fittest” is the primary law of evolution, and no more striking example of its inexorable truth need be looked other than is afforded by the decay and rapid extinction of the Australian aboriginal race which is going on under our very eyes, before the advance of the all-conquering white race… So completely have the blacks retreated before the advance of the whites that in the south west it is comparatively rare to see a single specimen of the native black in the settled district, notwithstanding the fact that they are strictly protected by the Government and well treated by the white settlers.’ The West Australian, 8th April 1912

Of course, not all non-Aboriginal people acted in these ways or held these racist beliefs.

NB. The Eugenics Society of Victoria, of which some of Melbourne’s elite were members, continued until 1961.

Important legislation, in the form of three Mental Deficiency Bills, was presented to the parliament in 1926, 1929 and 1939 by the Premier Stanley Argyle, a friend and colleague of Berry.

The bill aimed to institutionalise and potentially sterilise a significant proportion of the population – those seen as inefficient. Included in the group were slum dwellers, homosexuals, prostitutes, alcoholics, as well as those with small heads and with low IQs. The Aboriginal population was also seen to fall within this group…

… The third in 1939 was passed unanimously, but not enacted in the first instance because of the outbreak of war and, later, due to the embarrassment of the Holocaust.

Other state parliaments were inspired to also institute such legislation by Berry’s many town hall lectures across the nation.’ Eugenics in Australia: The secret of Melbourne’s elite, Ross L Jones, The Conversation, 21 September 2011