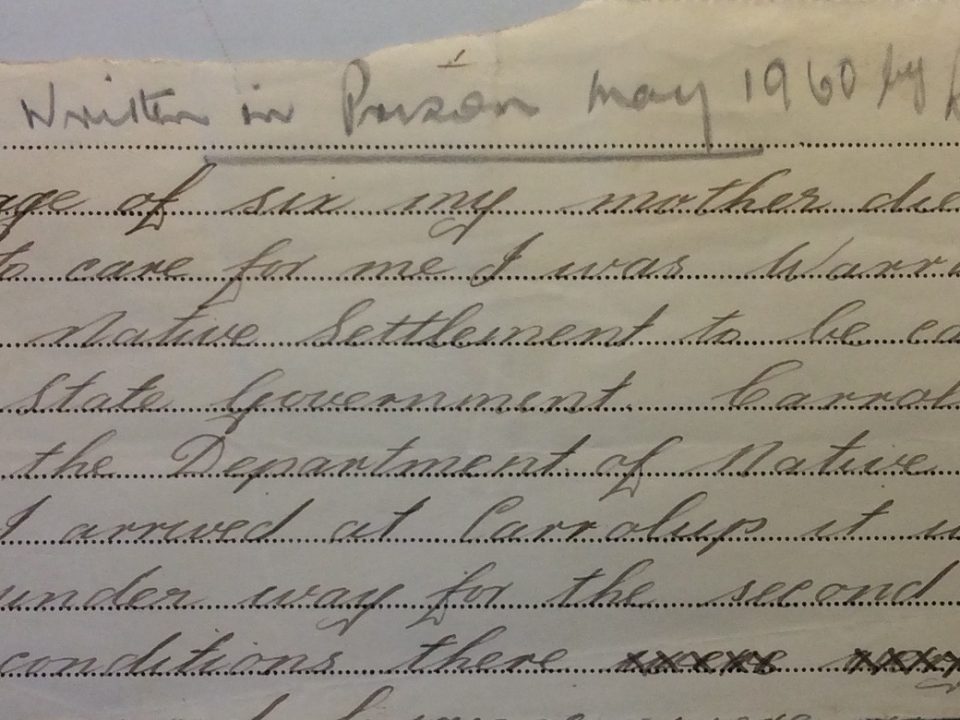 First page of a description of life at Carrolup Native Settlement written by Carrolup artist Revel Cooper in 1960. Doreen Trainor Collection, J. S. Battye Library of West Australian History. [Click the image to see the full page. The letter continued, '... were of the very lowest standards' on the second page.]

When close friend and filmmaker Michael Liu and I were researching the life of Carrolup artist Revel Cooper, we came across an important ‘letter’ he wrote that was in the Doreen Trainor Collection at Battye Library.

Revel wrote his memories of Carrolup Native Settlement from the time he was there in 1940 until he left in 1949. He also reflected on the impact on Aboriginal people of the school’s closure a year later. Revel wrote this letter in May 1960, while he was in prison.

Below, I have included a section of the book that John and I will publish in 2019 entitled The Aboriginal Child Artists of Carrolup. This section focuses on Revel’s time at Carrolup until early 1945. I will focus on other parts of this letter in later blogs.

For those who do not know the background, I should point out that part of the Western Australian government’s new policy outlined in the infamous 1905 Aborigines Act of Western Australia, which subjected Aboriginal people to tyrannical control, gave a white Chief Protector legal guardianship over all Aboriginal children.

Chief Protector Mr A O Neville developed a plan for setting up ‘native settlements’, run by the government, where Aboriginal children taken from their parents would be educated and trained for unskilled occupations. Carrolup, located 40 kilometres from the South West Australian town of Katanning, was one of the two native settlements established by Mr. Neville. The Settlement was opened in 1915, but was closed in 1922. It was re-opened in 1939.

“One of the young children at Carrolup in the early 1940s is Revel Cooper. Revel was born in 1934 in Katanning to Rita Hill and James Cooper. When he was five years old, his mother died of heart failure during anaesthesia for an operation, aged only 27 years.

Revel is made a Ward of the State and sent to the Carrolup Native Settlement in 1940. Most of the Aboriginal children living at the Settlement have been taken from their parents, a few of whom live on the other side of the river to the main compound. They are not allowed free access to their children.

In his later recollections of Carrolup, Revel Cooper describes the living conditions in the mission as being of ‘the very lowest standards’.

The elder natives were issued with clothing which I recall consisted of dungarry pants army Boots woollen flannels and a very tough shirt made from a cheap government material from this same material two pieces of clothing were made for women this being their complete dress. Revel Cooper, 1960 (We have not altered Revel’s original words in this communication, or used [sic] for clarity purposes)

The two dormitories where the children live are stone buildings, each consisting of two rooms and a bathroom.

We were locked in our respective dormitorys at 5pm winter and summer, with no drinking water a open sanitary buckett was placed in the centre of the floor, being afraid of the supernatural we were afraid to leave our beds at nights…

The Aboriginal children of Carrolup run wild at this time – fighting, bad language and open lovemaking are commonplace.

Fights were numerous among women men boys and girls there was hardly a day passed without someone fighting. Bad language wasn’t considered as such, among us and was used as normal words in our everyday speech…

…One supposedly kind Superintendent to keep us out of mischief supplied us with Rubber and catapults to our hearts desire. After slaughtering birds and other species of wildlife (including domestic cats) the novelty wore off. Then we turned our attentions to glass windows after which we turned on one another.

Bullies prey on some of the children, who do not report them for fear of the consequences.

‘We had our bullies among the older boys as well… We dare not report these culprits because we knew the results, no matter what we did against them we always payed.

Revel attended school ‘on and off’ for as long as he could remember.

In the latter part of the war we had no schooling at all.” © David Clark and John Stanton, The Aboriginal Child Artists of Carrolup

It is all the more remarkable that Noel White was able to connect with these children, and then inspire them to create such beautiful landscape art, given their wild behaviour between 1940 and 1945. I will go on to discuss in a future blog that the children showed what we now know are clear signs of trauma during this time and for a period afterwards.