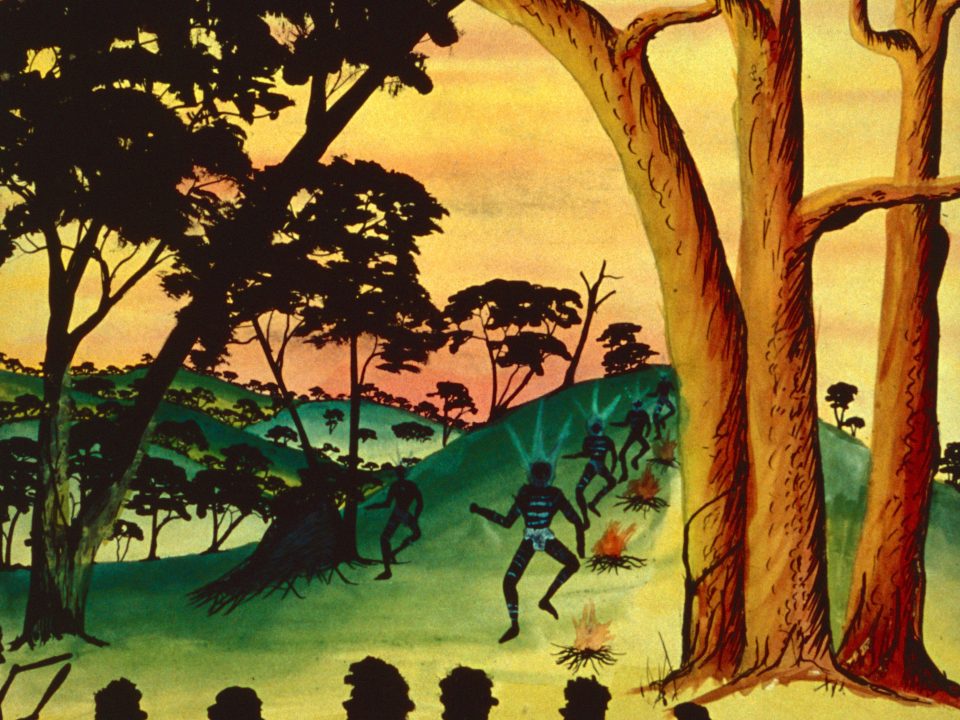 A previous blog highlighted the child artists’ fascination with the liminality of dusk, the period between day and night.

The night was also a time for ceremony. This is depicted most evocatively in, for example, Reynold Hart’s ‘Dancing Figures’, or his deceptively titled ‘Imagined Corroboree’—deceptive, in that this was the context wrongly attributed to the work.

And this is why.

They… also drew haunting pictures of Aborigines—full-blood Aborigines: scenes of what they imagined Aboriginal life to be, because for them that traditional life did not exist, and could not exist under the conditions that prevailed at Carrolup. In one sense, we could speak of their attempt to escape though art into a world far removed from the actuality in which they found themselves.’ Berndt, R.M. and E. S. Phillips, The Australian Aboriginal Heritage: an Introduction Through the Arts, 1973, p307.

It must have seemed during the early 1970s, at the height of Government policies of Assimilation and Integration, totally improbable to be anything other than ‘imagined’! But it is now very clear that these artworks were not ‘imagined corroborees’.

They were, in fact, direct observations by the boys from life of ceremonial practices being carried out at that time, in the late 1940s.

Many years after I started the Carrolup Project, in 1986, I found out the truth.

It was over lunch at our home with Noelene and Ross White one day, in about 2012, that Ross told my late wife Ghislaine and I the amazing story of what he had witnessed when he was young. He told us that he had gone with his father Noel ‘six or seven times’, out into the bush near Carrolup, to watch ceremonial dances, very much as depicted in the corroboree drawings. He thought that this would have been ‘about 1948 or 1949’. They both sat with the men.

He also told us that Noel’s wife Lily and his sister Noelene had come out too, ‘a couple of times’, and that they ‘had sat with the women further back’. Noelene agreed with this.

This is highly significant. It means that these ‘corroboree scenes’ have been drawn from life, principally by Reynold Hart, Parnell Dempster and Revel Cooper—examples by other child artists are not known. However, other artists included figures in their drawings, and in particular Keith Indich.