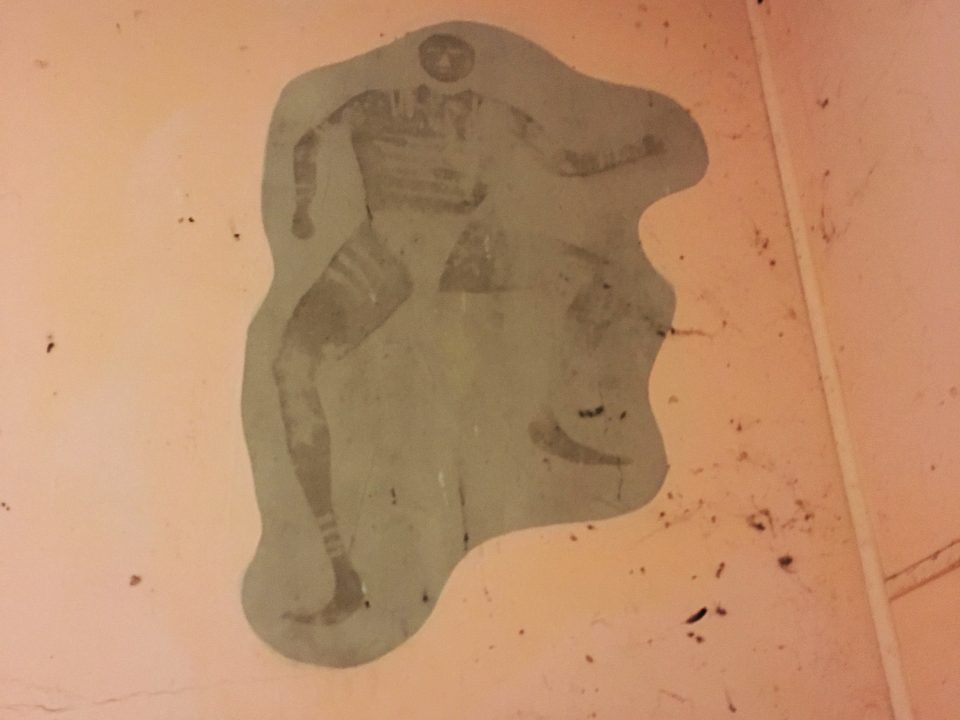 The frieze below the ceiling in the westernmost dormitory at Carrolup. Photographed by John Stanton (The Carrolup Story), 27th November 2018.

One of the most remarkable artefacts surviving at Carrolup/Marribank today is one element of a frieze that encircled one of the bedrooms in the westernmost of the two children’s dormitories—the left one viewed from the front of the buildings.

According to Carrolup artist Parnell Dempster, the frieze comprised a number of figures painted at nights, high up on the walls, by a group of boys who stood on a bed pushed up to the wall, and on whom other boys stood, taking turns to execute the design.

Just one figure of the frieze survives, due to a leaking downpipe on the outside dampening the solid stone wall and causing the paint to ‘bleed through’ the layers of whitewash that were applied in the early 1950s when the Baptist Church took over the running of the Carrolup Native Settlement, renamed the Marribank Baptist Children’s Home.

This figure is very similar to those painted by Revel Cooper, Parnell Dempster and Reynold Hart. Reynold’s drawings Dancing Figures and Imagined Corroboree are located in the Art Gallery of this website. These figures depict Noongar men performing, dressed in knotted white pants, with striped body painting on their chests, arms and legs, commonly with a tri-corn headdress. This headdress is the sole element of the frieze that has not survived. Its shadow may still reside under the paint surface, as with the rest of the frieze.

But this is a remarkable survival, over 55 years ago, from when the boys were locked up each night in their dormitory—indeed, it is an enduring spirit of the past.

John describes how the boys drew a frieze all around their dormitory walls, sometime between 1948 and 1950. Part of the frieze remains visible today, indirectly due to a leaky gutter outside the building. A spirit figure from the Carrolup past still dances. Filmed by David Clark at Carrolup on 26th November 2018.