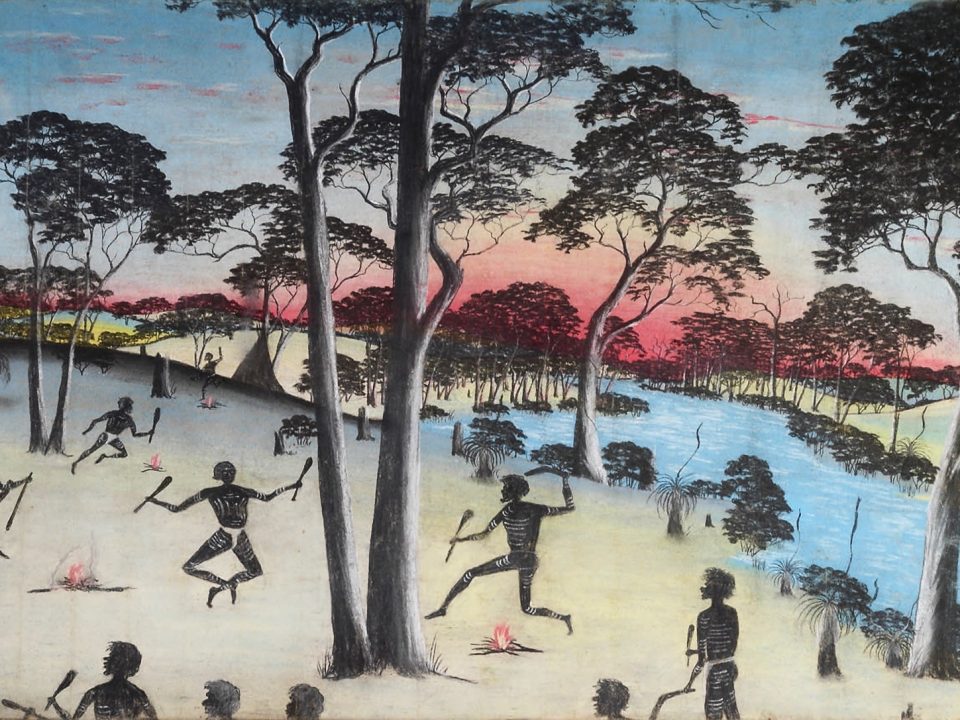 I was writing a new blog post this morning when I realised that I had not previously included a section from my book Connection: Aboriginal Child Artists Captivate Europe about the first exhibition of the Carrolup children’s art in England. Here is that section:

“In their book, Child Artists of the Australia Bush, Mary Durack Miller and Florence Rutter say of the London exhibition:

‘The London Opening, in the Hall of India and Pakistan, at the Over-Seas League, coincided with the social occasions of New Members’ night, July 28, 1950, exactly one year after Mrs Rutter’s first introduction to aboriginal art and her first visit to a native settlement. A distinguished and colourful gathering from many countries was deeply impressed by the quality of freshness of the work of these Australian bush children. Many declared the exhibition incredible.’

On the 30th of July, Mrs Rutter writes again to Mr Middleton, telling him that there were 300 invited guests at the opening of the exhibition, including reporters from 14 newspapers [1,2].

A number of eminent individuals comment on the quality and beauty of the drawings. Lady May Stott, a painter of miniature portraits and a Soroptimist:

‘… expressed the greatest admiration for the lovely colours the children used in their designs, & the wonderful sense of atmosphere, perspective and life in their pictures.’

Lady Stott becomes Chairman of the Aboriginal Children’s Trust, which Mrs Rutter sets up to publicise and help sell the Carrolup children’s art.

Mrs Rutter tells Mr Middleton that she had a good talk with Sir Graham Savage, who is Education Officer of the London County Council. Sir Graham largely invented the concept of comprehensive schools and originated the phrase. He was:

‘… very astounded that young aboriginals could have produced such work, particularly with no tuition. He was also very surprised at the standard of their ordinary school subjects. I have a page of Revel Cooper’s schoolbook mounted on cardboard & covered with cellophane to show his writing and drawing together.’

Mrs Rutter cannot have the drawings framed because they would be too heavy for her to carry around for future exhibitions, so she has mounted the drawings on cardboard and covered them with cellophane. In her letter to Mr Middleton, Florence says of the boys and their art:

‘I am spending time & money to show the work of these children for I want them to have a better future than the life they have had most of their lives. They should be helped to help themselves. They are willing to practise to work & practise to perfect their art – so it only remains to organise the arrangement so that they may produce the pictures that the public will buy in England even if there is not the demand for them in Australia.

These boys, at least 50% of them will develop their technique and turn out pictures equal to that of Albert Namatjira & he can earn £1500. He was given his chance &  encouraged even taught how to paint by Rex Batterbee, also he is a man of 45 – whereas these youngsters of 12 to 14 have years to improve by practice without tuition their natural gifts if they are allowed to do so!’ [Emphasis in original]

I assume that Mrs Rutter is referring to an annual income of £1500 from the art. An income of £1500 (Sterling)  in 1950 would equate with a sum of over $81,000 today.” Connection: Aboriginal Child Artists Captivate Europe, David Clark, in association with John Stanton. Copyright © 2020 by David Clark.

[2] Comments of people attending the Carrolup exhibition at Over-seas House in London in the notebook containing letters of appreciation provided by Florence Rutter to Noel and Lily White. Noel & Lily White Collection.