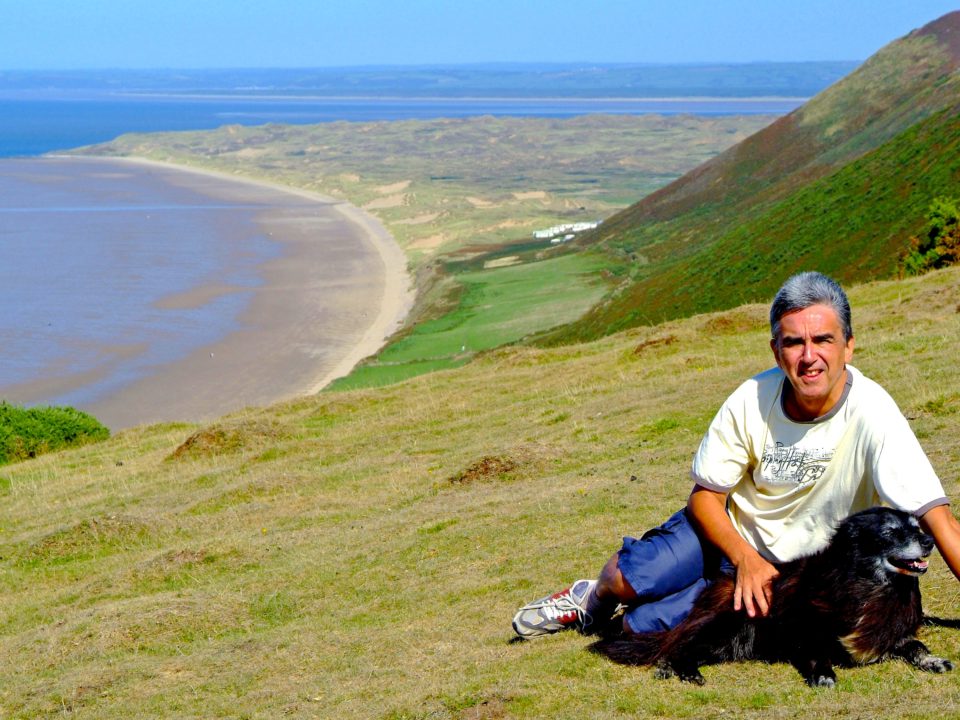 With my dog Tessa on Rhossili Down overlooking the beach at Llangennith, Gower, South Wales, in 2007. I lived on the Gower for 14 years and left a large part of my heart there. Photograph: Alan Clark, August 2014.

This is the 100th blog I personally have written and posted on The Carrolup Story. You can peruse the Story and Healing blogs I have written since John and I launched the website in November 2018. I thought I’d celebrate my ‘100’ by describing how I came to work on this project and be writing a book, The Aboriginal Child Artists of Carrolup.

When filmmaker and close friend Michael Liu and I were first shown work of the Carrolup artists by our Noongar friend Karen Hume, we were stunned by the beauty of the art and beguiled by the stories we heard. We started researching for a film project on one of the artists, Revel Cooper. We found a great deal of important material, experienced many strange coincidences, and met some very interesting people, most of whom were supportive of what we were doing.

Eventually, however, I became so enchanted by what had happened at Carrolup, I decided that this story needed to be my focus. I had many enlightening discussions with Noel White’s daughter Noelene. I pored over her family’s memorabilia relating to their time at Carrolup, as well as a variety of items that Mike and I found at the Battye Library in Perth and other places.

I knew I had to write a book about Carrolup, using the ‘faces’ and ‘voices’ of the people from that time. Noelene was thrilled by my decision. I also knew that the book had to be part of a wider project—there are many ways to tell and disseminate stories. I met John Stanton, who had been involved with this story for over 40 years, and the rest is history, as they say.

We started to develop a wider Carrolup project and became great friends. Both John and I wanted the project to facilitate healing amongst Aboriginal peoples, as well as enhance awareness in wider society about the resilience of Aboriginal people in the face of considerable adversity.

Why my interest in facilitating healing amongst Aboriginal peoples? To help you understand this personal interest, I must ‘briefly’ describe my career.

I was initially a neuroscientist for 25 years, working on the brain chemical dopamine and its relationship to behaviour, and to neurological and psychiatric conditions. I spent an inspirational three years (1981-84) working in Sweden alongside Arvid Carlsson, the ‘father’ of dopamine and winner of the Nobel Prize for Medicine in 2000. After working in the States for two years, I returned to the UK in 1986 to take up a prestigious Fellowship I had been awarded and develop my own neuroscience laboratory in the Psychology Department at the University of Reading (and later Swansea University in Wales).

Years later, I saw a quote from Carlie Atkinson of We Al-li Healing Program: ‘It is not what is wrong with a person, but what is happening or has happened to that person that influences their wellbeing.’  I now frequently use this quote.

I had become very interested in addiction and I started a community-based project—originally called Wired but later Wired In—focused on empowering people to overcome substance use and associated problems. I spent the next decade understanding and writing about the processes underlying addiction recovery, and talking with people in recovery and practitioners working in the field. I wrote a number of recovery stories and conducted a good deal of research, along with my group of talented ex-students and people in recovery who worked alongside us.

I learnt so much, thanks to other people, including the following few facts that are part of the foundation of the work I do, even today:

I took early retirement from my university in 2006 to focus on Wired In, and used my early retirement money to develop Wired In To Recovery. This online recovery community—which linked into real world community initiatives—had an enormous impact and played a key role in the development of the Recovery Advocacy Movement in the UK, working to catalyse activity at a grassroots level. Sadly, I had to close down this initiative in 2012 due to lack of funding. I later developed the Recovery Stories website. Stories provide hope, inspiration and understanding.

I had moved to Perth, Australia, at the end of 2008. I was inspired to work in the trauma healing field after reading Judy Atkinson’s wonderful book Trauma Trails: Recreating Song Lines. In 2013, I launched Sharing Culture, an educational initiative to help Indigenous people heal from intergenerational trauma. I read as much as I could about trauma and the healing of trauma. And I started to appreciate how much wider society could learn from Indigenous peoples.

I had taken a long and varied journey from my days working as a neuroscientist.

Sure, it is a story that also has a number of negative elements, including the taking of children from their families. However, people need to know the bad things that have happened in the past, so they don’t do the same again. It is important to realise that the story of Carrolup, which is also about oppressors and the oppressed, speaks to today.

At its heart, our story is about the innate emotional needs of human beings, like feeling a sense of belonging, having hope, and being valued. What happens if these needs are not satisfied? And what can happen if satisfaction of these needs is restored?