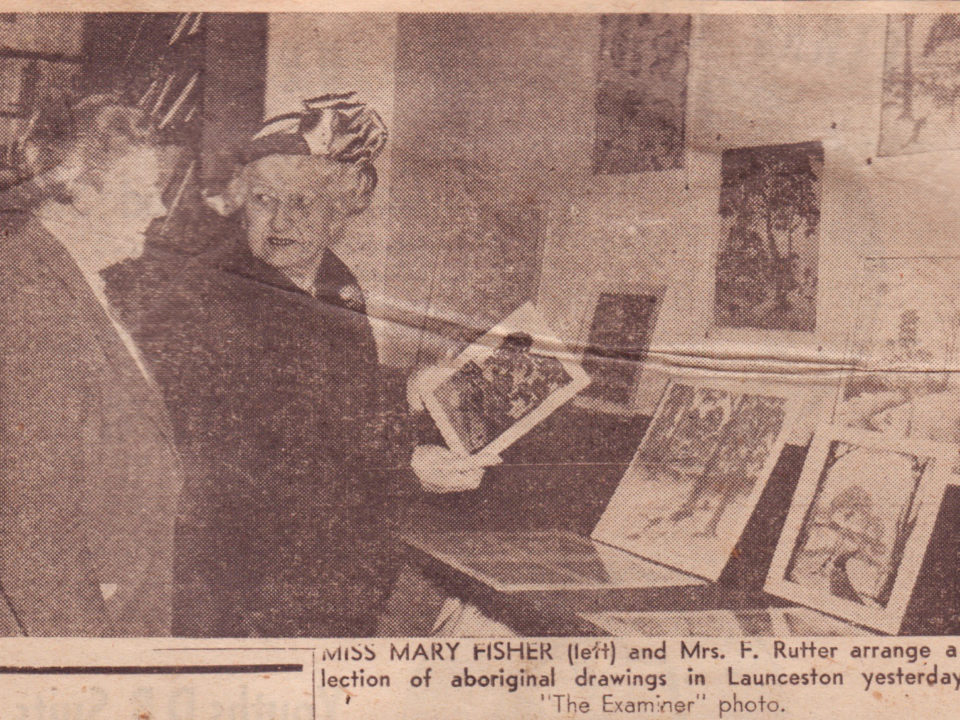 In an earlier blog, I described how 71-year old Englishwoman Mrs Florence Rutter visited Carrolup in July 1949. Whilst there, Mrs Rutter bought £5 worth of Carrolup drawings and designs.

I found it hard to make a choice for all were so attractive in colouring, so perfect in perspective, and so masterly in drawing. What a collection! The work of untaught aboriginal children! It was an amazing scene which will live long in my memory! Eagerly I bought a representative collection.’ Florence Rutter, Little Black Fingers, 1951, p. 2

Here is a description of the early part of this tour taken from our forthcoming book The Aboriginal Child Artists of Carrolup:

After travelling to Melbourne in August 1949, where she meets Mary Durack Miller’s sister Elizabeth, Mrs Rutter journeys to the state of Tasmania. She launches Soroptimist clubs in Hobart and Launceston, whilst also publicising the Carrolup children’s artworks wherever she goes. She is interviewed on the 7HO radio station.

Mrs Rutter devotes considerable time to helping Miss Fisher with the display and the pair are delighted when they can send to Carrolup a first order for 36 pictures and designs, for which they quote a figure of  £22.10.0d (equivalent to $1,250 in today’s money). When the donation box is almost full (it totals £6.05.06d), Miss Fisher tells Mrs Rutter that she better take the money back to Perth to purchase materials for the children.  The latter is thrilled at the thought of the pleasure that new paints and crayons will bring the children. ©The Aboriginal Child Artists of Carrolup by David Clark and John Stanton