My apologies for the long period of time since I last blogged. I’ve been busy working on a book of addiction recovery stories, which focuses on the original story and seven-year updates of people’s lives I originally published on my Recovery Stories website.

Last week, I received the latest copy of the magazine of The Royal Western Australian Historical Society, History West. It contains an article that was written about my earlier talk, Aboriginal Child Artists of Carrolup, given to the Society on the 11th of September this year.

Here is the article (I’ve shortened some of the paragraphs for ease of reading online):

‘On Friday, 11 September, the Society welcomed Professor Emeritus David Clark, his co-author John Stanton, and family members of those who had lived at Carrolup, for a talk about the Aboriginal children of Carrolup Native Settlement in the 1940s.

Most of the audience knew of Carrolup and were keen to hear more of the children’s lives and art, and conditions at the settlement. David Clark told what at its heart was ‘a story of trauma, and the overcoming of trauma’. It was not a happy story, but it was one about human resilience and hope in dire circumstances. 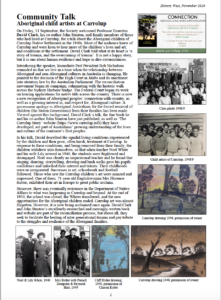 November 2020 edition of The Royal Western Australia Historical Society (pp. 2). NB. The legend of the bottom right figure and the one to the left of it have accidentally been swapped.

Introducing the speaker, Immediate Past President Bob Nicholson reminded us that we live in a time when the relationship between Aboriginal and non-Aboriginal cultures in Australia is changing. He pointed to the decision of the High Court in Mabo and its enactment into statutory law by the Australian Parliament. The reconciliation movement began its campaign, culminating with the historic walk across the Sydney Harbour bridge. The Federal Court began its work on hearing applications for native title across the country.

There is now a new recognition of Aboriginal peoples’ connection with country, as well as a growing interest in, and respect for, Aboriginal culture. A government apology toAboriginal Australians for the forced removal of children (the Stolen Generations) from their families has been made.

Viewed against this background, David Clark’s talk, the fine book he and his co-author John Stanton have just published, as well as ‘The Carrolup Story’ website (https://www.carrolup.info) they have developed, are part of Australians’ growing understanding of the lives and culture of the continent’s first peoples.

In his talk, David described the squalid living conditions experienced by the children and their poor, often harsh, treatment at Carrolup. In response these conditions, and being removed from their family, the children withdrew into themselves, so that when teacher Noel White and his wife Lily arrived in 1946, the students were frightened and disengaged.

Noel was clearly an inspirational teacher and he found that singing, dancing, storytelling, drawing and bush walks gave his pupils confidence and unlocked their interest and talents. Their childhoods were re-invigorated. Successes in art, schoolwork and football followed. Those who saw the Carrolup children’s art were amazed and impressed. One of them, 71-year old Englishwoman Mrs Florence Rutter, exhibited their art in Europe to great public acclaim.

However, there was eventually resistance in the Department of Native Affairs to what was happening in Carrolup and beyond. At the end of 1950, the school was closed, the Whites transferred, and the new opportunities for the Aboriginal children ended. Carrolup art was almost forgotten.

However, it is now being acclaimed once again. David Clark and John Stanton’s excellently-researched and movingly-written book and website are part of the reconciliation process; but above all, they seek to facilitate the healing of inter-generational trauma and pay tribute to the struggles and resilience of the Aboriginal families.’

Please note that the legends for the bottom right figure and the one to the left of it should be swapped, i.e. Cliff Ryder is the artist of the bottom right drawing. Our apologies for this error.