My Carrolup Talk in Perth 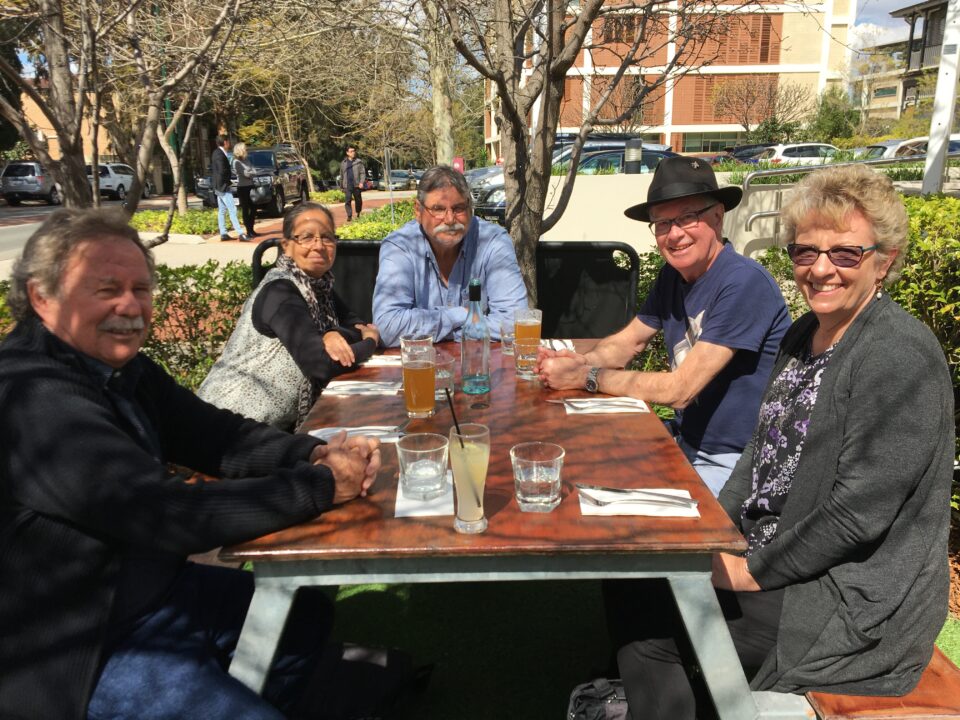 On Friday, 11th September 2020, I gave a talk entitled Connection: Aboriginal Child Artists Captivate Europe at the Royal Western Australian Historical Society in Perth. This talk was originally to be given in May, but had to be postponed due to Covid-19. I had been looking forward to giving the talk and I was thrilled by the positive response it received.

Audience members included 86-year old Noelene White, daughter of Noel White, the teacher who inspired the Aboriginal children of Carrolup. Noelene has not only given me access to all her family’s Carrolup memorabilia (photos, letters, newspaper clippings, etc), but shared her personal memories of Carrolup, and encouraged me while I was writing the Carrolup book. It was really good to be able to be able to summarise the story for Noelene and to see her feelings of pride (which were clearly visible) for what her parents and the Carrolup children had achieved.

The daughter of Carrolup artist Cliff Ryder, Charon Ryder, attended the talk, along with her husband John Kalin. Charon shared her family’s experiences and thoughts during the question time session. There was no doubt that the audience was spellbound by what Charon had to say. And of course, there was John Stanton, my good friend and co-conspirator on this project. It was good to be able to describe John’s 44-year Carrolup journey. 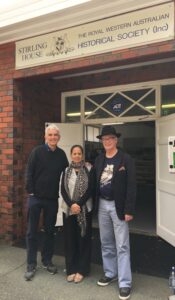 After introducing these three guests, I briefly talked about the impact of British colonisation of Western Australia, the backdrop to the Story. I described the early life of Revel Cooper, one of the child artists, both before and during the time he was at Carrolup. I touched upon the arrival of the White family at Carrolup.

I related how Noel White was initially unable to connect with the children as they were so fearful. I then described how he connected with the children through a unique educational and personal development programme, along with his empathy and compassion. The children’s art developed as part of this education programme.

I went on to describe how the children and their work began to attract public attention and how three of the boys silenced doubters at a teachers’ conference in Albany. I related the story of the unbeaten Carrolup Native Settlement School football team.

The story took a major leap forward with the two visits to Carrolup of the 71-year old Englishwoman Mrs Florence Rutter in 1949/50. Mrs Rutter exhibited the art in cities around Australia and New Zealand. She then agreed to organise exhibitions and sell the children’s art in Europe, sending back the money to Western Australia where it would be used to help the children develop their art further. I have written a series of blogs celebrating 70 years since Florence told the boys of Carrolup that she would do all in her power to make their work known throughout the world. You can find them here: Part 1, Part 2, Part 3 and Part 4.

I related how Mrs Rutter exhibited the children’s artworks in Europe to huge acclaim. However, conflict erupted at Carrolup between Noel White and the settlement superintendent Mr Sully. The Whites experience a number of shocks, one being an announcement by the Commissioner of the Department of Native Affairs, Mr Stanley Middleton, that there would be no more Carrolup art for sale. He had changed his mind. Soon after, Noel and Lily White’s new born child passed away. At the end of 1950, the school was closed with little warning. The boys’ dreams of a better future were shattered and they were thrust into a white-dominated world in which they were considered inferior.

This part of the Story took up most of my talk. I went on to briefly describe what happened with Carrolup, and with some of the children and other main characters in the story, over the following years.

Given my background, I briefly talked about trauma and the healing of trauma. Noel White facilitated the healing of the children’s trauma through his educational approach, whilst the children themselves and their love of art also played a significant role in this healing process. The children helped each other, a true community spirit.

I pointed out that at its heart this story is about the emotional needs of human beings, e.g. being empowered, having hope, feeling a sense of belonging, being loved. What happens if these needs are are not satisfied? And what can happen if satisfaction of these needs is restored?

I finished by pointing out that, in my humble opinion, the story of the Carrolup child artists may very well have been lost if it was not for John Stanton. I described his role over the past 44 years. I emphasised that it is so easy for a story like this to be lost or ‘changed’ (the latter has been happening).

I closed by emphasising that the lives of the Aboriginal children of Carrolup, and those non-Aboriginal people who walked alongside them as equals, can help shape the present and the future. It is our responsibility, as individuals and institutions, to maintain the integrity of this story and ensure that it is disseminated far and wide.

I was thrilled by an email I received from Lenore Layman, one of the organisers of my talk. In this email, Lenore said:

‘What a wonderful talk you delivered yesterday David. Thank you so much on behalf of the entire Society.

Everyone who attended thought it was one of the most interesting they’d heard and one of the most necessary in our current situation as a nation. Several told me that they wanted to see or read further on the works of art, the artists and the Carrolup school.’

Why not learn more by purchasing the eBook Connection: Aboriginal Child Artists Captivate Europe from Apple or Amazon for A$9.99. You can find out more here. And please tell your family, friends and colleagues about this story and book. Thank you for your time.