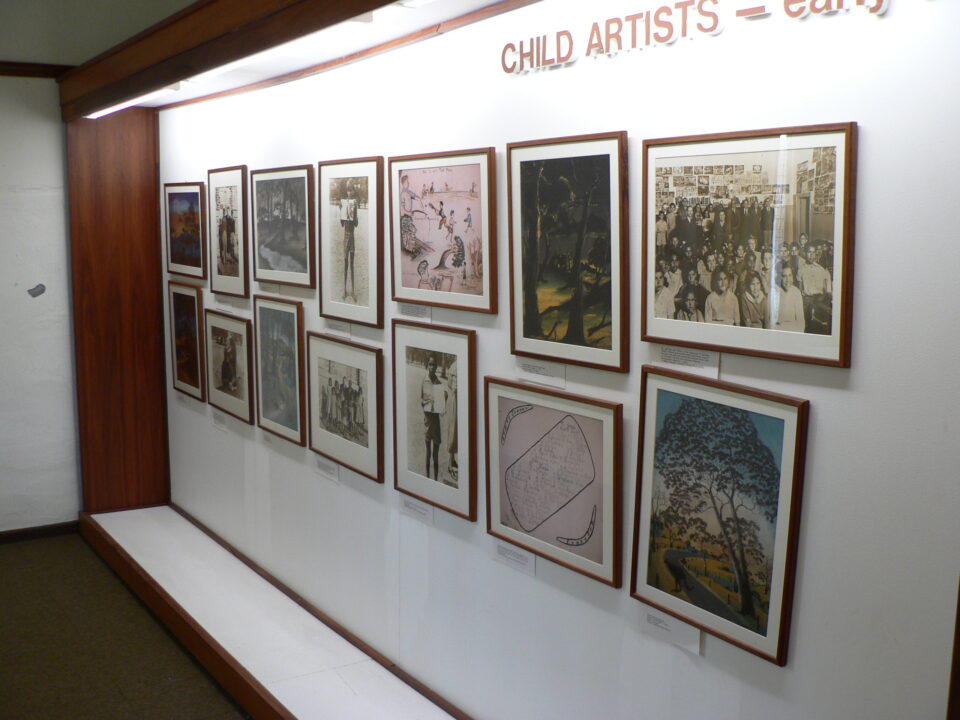 ‘Child artists: early days’. A display of photographs from the Noel and Lily White Collection, held by the Berndt Museum of Anthropology, at the Marribank Cultural Centre. Photograph: John Stanton, 12th September 2007.

I recently came across these old photos of the displays we did at the Marribank Cultural Centre, Carrolup. The Cultural Centre was, as I have already blogged, funded with a grant from the Australian Bicentennial Authority, something many First Nations peoples wouldn’t have a bar of. But the Marribank Community successfully applied for a grant, and in part this funded the restoration of one of the old stone dormitories, its fit-out, and the mounting of an exhibition about the Child Artists of Carrolup.

This gallery contained several display cases, one dealing with the Noongar history of the South West, ‘Nyungar Old Ways’ (that was the community-preferred spelling those days), with artefacts loaned primarily by local Wagin neighbour, John Benn, whilst other display cases told the Carrolup Story through photographs held by the Berndt Museum of Anthropology at The University of Western Australia, then called the Anthropology Research Museum. Additional cases displayed contemporary Marribank arts production, labelled ‘Marribank Arts and Crafts: first works’ and ‘Arts and Crafts For Sale’. There was also a case labelled ‘Marribank Today’.

The Cultural Centre opened in late 1988, the Bicentennial Year, and attracted lots of community support, especially from local schools and service groups.

The Marribank Community, though, wanted a second gallery to be fitted out, in order to display elements of the collection of historic photographs that had been assembled by former Marribank residents and supporters referring to the Marribank Baptist Mission years, largely as a response to the Opening of the Centre.

The Baptist Church was still operating Marribank at that time, and their organisation strongly supported a drive to find additional funds for the new gallery, to which they contributed financially. The Churchill Colour Laboratory in Subiaco created the prints, which were matted and framed by Art Presentations at Mt Claremont, Perth. Both companies contributed significant discounts, largely in the light of the Berndt Museum’s engagement of both firms over many years, if not decades 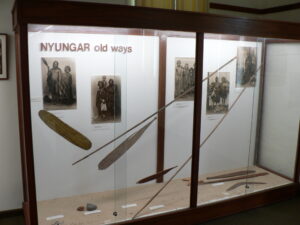 The Marribank Cultural Centre was a significant step in First Nations peoples of the South-West taking charge of their own voices and telling their own stories in their own ways.

It was also a big step at a national level, suggesting that things to come would bring about the kind of changes that First Nations peoples want. And are still waiting for.

Sadly, the Centre (as well as the Carrolup/Marribank settlement as a whole) has fallen on hard times following the departure of the Baptist Church and the re-allocation of the lease to the Southern Aboriginal Corporation (SAC).

It is many years since SAC employed a Manager to live on site (I gather they could find no takers,  due in part to the deteriorating living conditions with they would be confronted. Much as was the case when Noel and Lily White first arrived at the Carrolup Native Settlement).

Meanwhile, termites destroyed the wooden floors and display cases (but not the framed works and artefacts, thank goodness!)

All of those were removed for storage at the Southern Aboriginal Corporation offices in Albany, where they remain. This is despite a Heritage Grant being obtained for the restoration of the Centre with a new concrete floor, air conditioning, security and new cabinetry.

Today, the air conditioning unit has been stolen, windows are broken, birds fly through the building, and sheep droppings are everywhere. The doors are open. The once-new display cases have never been fitted out.

A sorry state, to say the least.

But these photographs tell their own story of this Settlement.

It is a sometimes contested history, for some community members, but celebrated by others.

The fabric of the Settlement will simply dissolve back into the earth if something isn’t done to protect it, and so with it a key element of South-West history.

And with this, the family stories, which will become dis-associated from this place.

And that beautiful country, captured so brilliantly by the Child Artists of Carrolup, and those who have followed on from then into today’s era.

Who will then tend the unmarked and unloved graves nearby of those who have passed before? 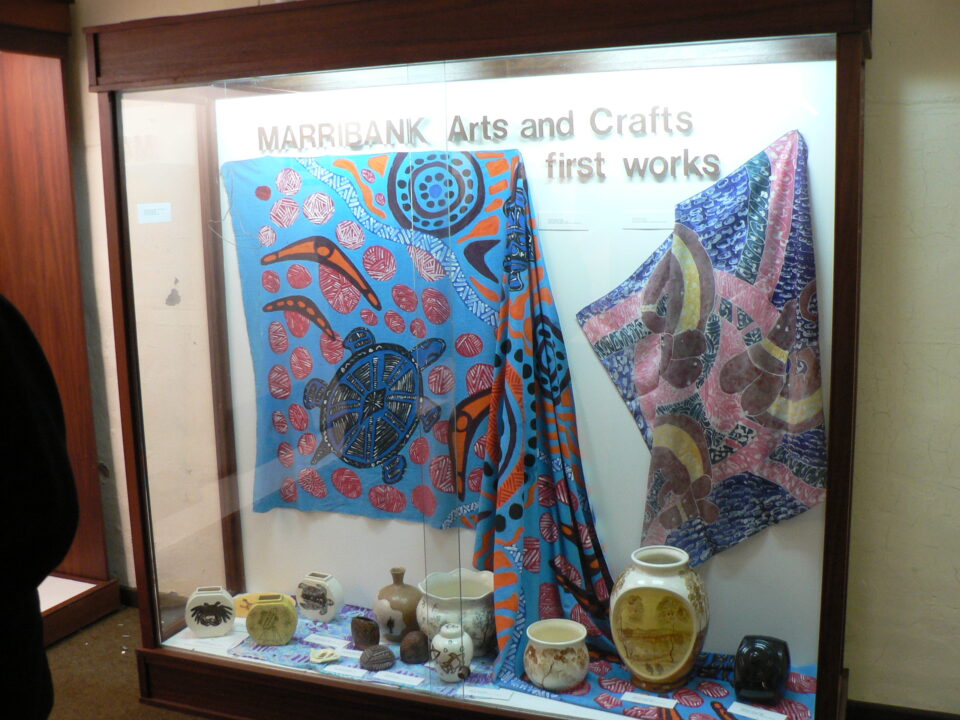 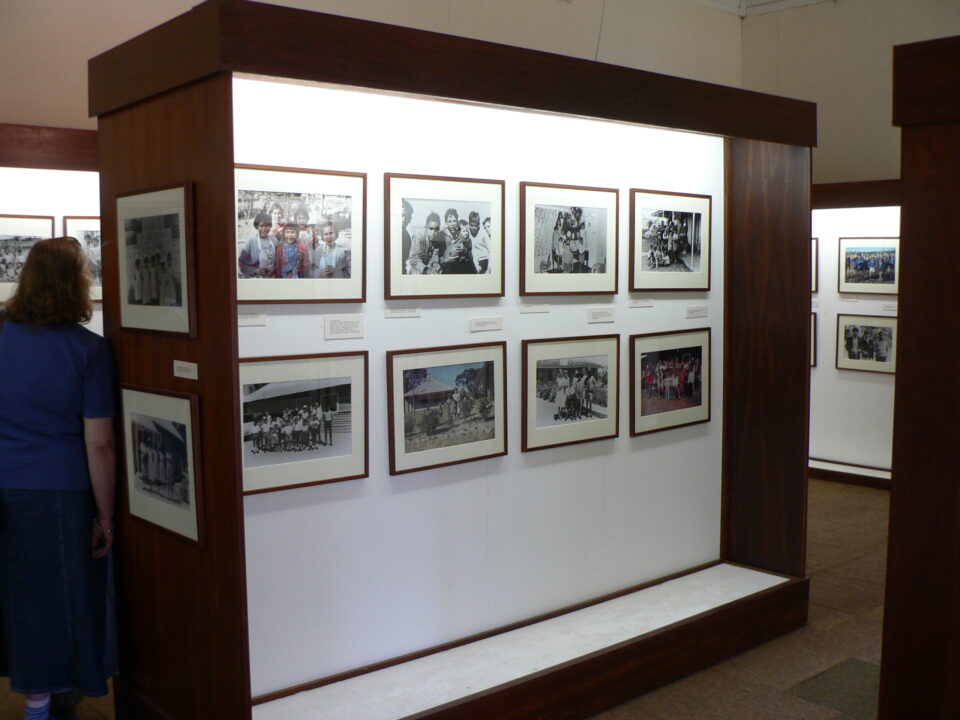