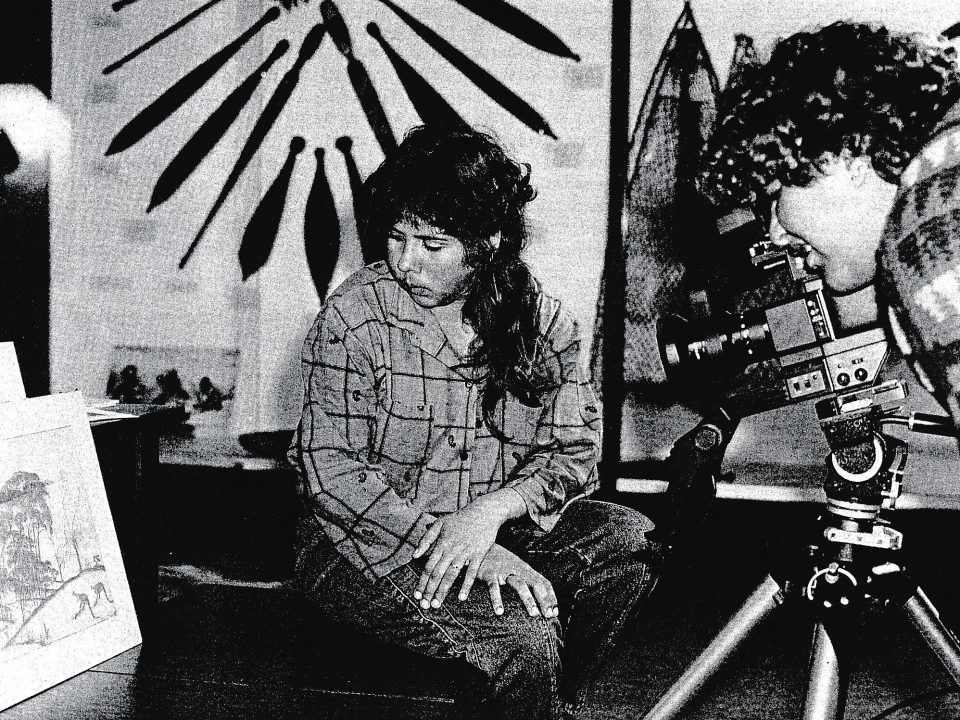 Trainees Tina Hansen (left) and Cora Farmer (right) videotape one of the early examples of Carrolup children's art held in the Berndt Museum for a film that was being made by John Stanton for the Marribank Community. Uniview, The University of Western Australia, 5/4, pp. 1-2, July 1986.

Yesterday, David wrote a blog about my 40 year involvement with Carrolup. He described the collaboration between the Marribank Family Centre and the Berndt Museum of Anthropology (of which I was Director), The Carrolup Project, that received generous funding from the Australian Bicentennial Authority.

Today, I focus on another element of my work down at Marribank/Carrolup. [Carrolup was renamed Marribank in the 1950s and both names are used by people today.]

Two Noongar trainees participated in a teaching program in museology at the Anthropology Research Museum, as the Berndt Museum of Anthropology was then known. Tina Hansen and Cora Farmer were funded by the Aboriginal Arts Board of the Australia Council to work towards establishing a Cultural Centre at Marribank/Carrolup.

Members of the community had sought assistance from John Stanton, Curator of the Museum, after they heard of his interest in the Carrolup children’s drawings produced in the 1946-50 period. The Museum had been actively acquiring examples of these drawings for several years. Copies of these and related materials, including photographs, manuscripts and press clippings, were lodged with the Cultural Centre, which was funded by the Australian Bicentennial Authority, and opened in 1988.

Tina Hansen and Cora Farmer learnt, while they were on placement with the Museum, collections management skills, display techniques, and photographic and videographic processes. They both spent the following year refining documentation on historical photographs.

The first exhibition, in one room of the Old Girls’ Dormitory, traced the history of Carrolup Native Settlement, as it was known, and the emergence of the ‘bush landscape’ school of art there. Another room displayed contemporary Noongar works.

A further gallery, which focussed on the Marribank years, opened in 1992.

After all, we are partners with Aboriginal communities in the same process, and we share the same goal, which is the continued preservation and development of Aboriginal cultural heritage.