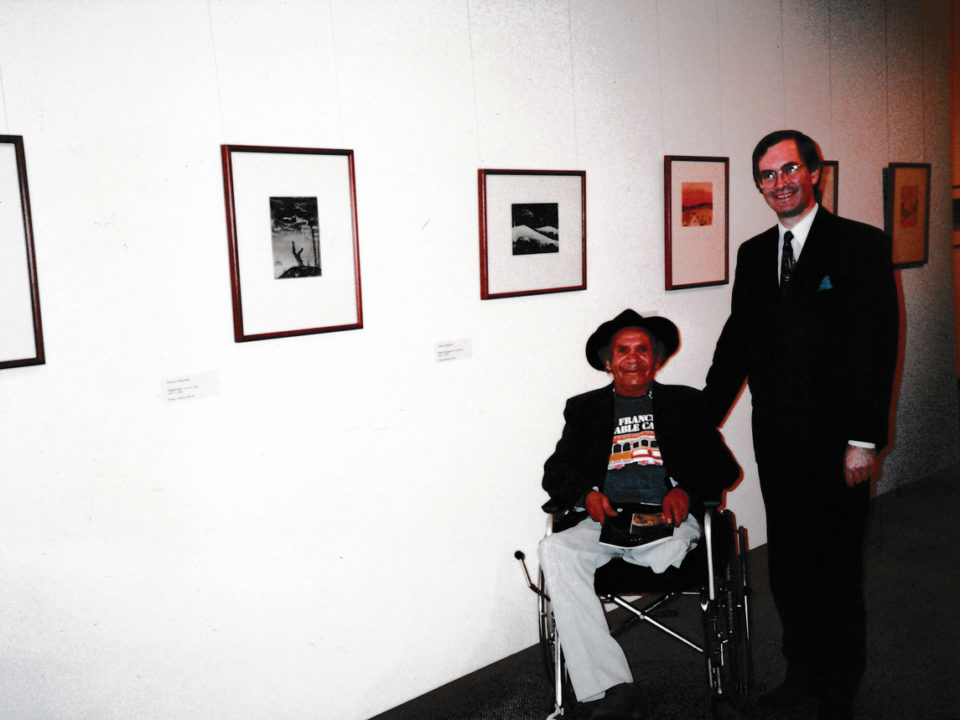 Parnell Dempster with John Stanton at the opening of the Nyungar Landscapes exhibition at the Lawrence Wilson Art Gallery, The University of Western Australia, 22nd May 1992.

Parnell Dempster was interviewed by the Weekend Australian, July 10-11, 1999, on the occasion of the NAIDOC Week exhibition at the Aboriginal Advancement Council, Perth, of Carrolup art loaned from the Berndt Museum of Anthropology.

I first met Parnell (‘Parnie’) Dempster in mid-1985 at the town of Williams, when I was commencing the Carrolup Project. He was living there at the time.

Pat Nunn at the Marribank Family Centre had told me that he was one of only two surviving child artists of Carrolup, the other being Milton (‘Micky’) Jackson, already quite ill.

Parnie had a great sense of humour, despite having lost a leg in a bus accident in Perth, full of yarns and stories. He always had a twinkle in his eye, rather like Uncle Angus Wallam, who was a worker on the Carrolup Farm at the time the boys were doing their drawings.

I again met up with Parnie two or three times when he was living at Midland, Perth, and we talked about the old days. I had wanted to video-record his recollections, using the portapack recorder the Museum had in those days, and twice we arranged to meet at Midland to do an interview but, regrettably, it never worked out.

Now I have only my memories of him. But they are vivid memories.

He told me about ‘Mr Whites’ (as Mr and Mrs White were always called by the children), and how he made the school a comfortable and safe place for the children. A kind of refuge, in fact, a sanctuary.

Parnie described Mr Whites in his classroom, the rambles in the bush, drawing in the school­—and on the walls of the dormitory, when the children would make a human pyramid on a bed to reach up to the top of the walls.

He recalled the Katanning Show Days, playing football, and coming up to Perth for the Boans exhibition.

Much of my understanding of this period at Carrolup comes from Parnie, in particular­—as well as from Uncle Angus, and of course Noelene and Ross White.