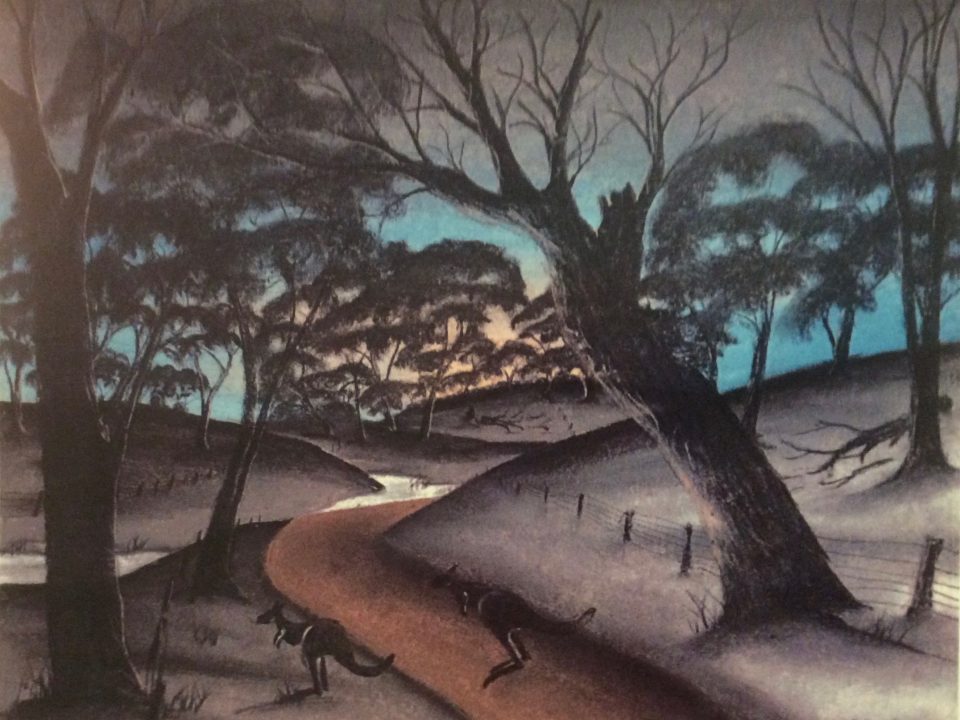 For Milton Jackson, the last surviving Carrolup child artist, attending the opening of the Colgate University crates in Katanning in 2006 (noted in an earlier posting) with his daughter Merlene Meade brought mixed emotions. His reconnection with an artwork he drew about 55 years earlier also affected all of us present very deeply. [This artwork is shown in the film below, but the one in the photograph above is another of Milton’s drawings.]

As Milton said at the time:

The Katanning Gallery was crammed with family, friends—and crates. Film crew competed for access—Kelrick Martin was directing the ABC film unit, recording a program for Message Stick, to be titled Carrolup Found.

It was a magical moment to see Micky reunited with his drawing after all these years—albeit only for a few weeks.

This is why I arranged, when the Perth element of Koorah Coolingah opened a week later at the Western Australian Museum (exhibiting the collections of the Berndt Museum of Anthropology at The University of Western Australia), for Milton to be presented with a photographic replica of his work, framed and inscribed by the Director of Colgate’s Picker Gallery, Dr Elizabeth Barker.

The replica wasn’t the ‘real thing’, but it was a recognition by Colgate University of the significance of their collection to Noongar people today and, of this work in particular, to the last remaining child artist of Carrolup.

Milton (Micky) Jackson, the last surviving child artist from Carrolup, and his daughter Merlene Mead, see his long-lost artwork being removed from a crate of artworks on loan from the Picker Gallery, Colgate University, USA. The drawing was shown at the Perth International Arts Festival (PIAF) exhibition at Katanning, ‘Koorah Coolingah: Children Long Ago’. [Berndt Museum of Anthropology, The University of Western Australia] Filmed by John Stanton in Katanning, Western Australia, on 21st February 2006.