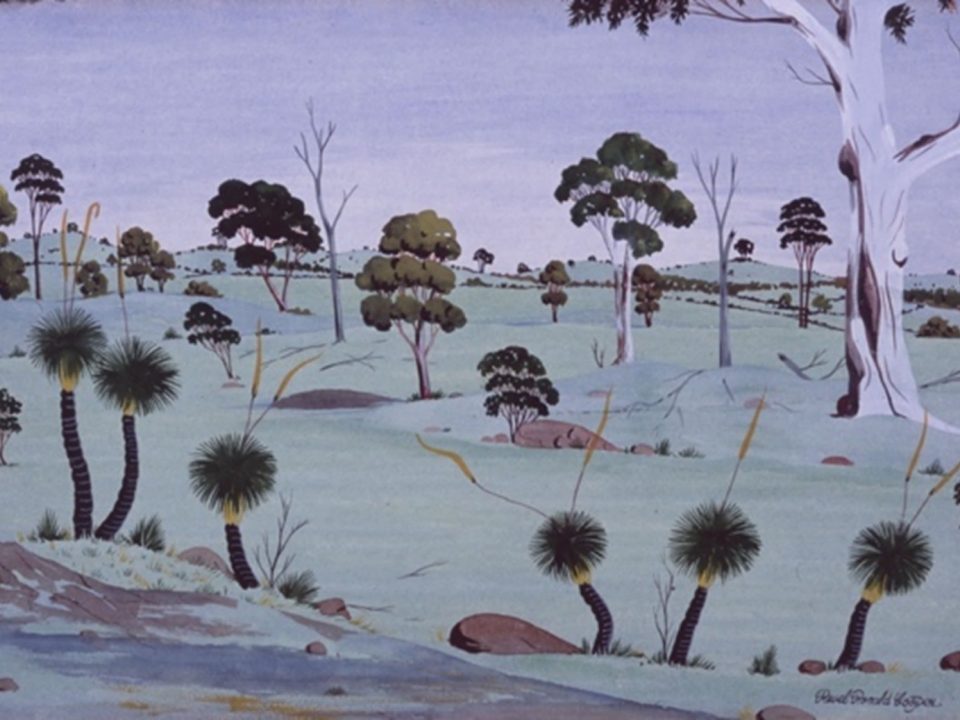 As my colleague John Stanton is away on holiday in New Zealand, I thought I’d take this opportunity to blog about John’s association with Carrolup for a period of over 40 years. That’s a serious, long-standing interest and commitment! The initial large section of this blog come from two of the articles, Search and Discovery, in the Story section of our website.

‘Social Anthropologist John Stanton first learns about the Carrolup children’s art in 1976 when he sees two Revel Cooper landscapes framing Ronald and Catherine Berndt’s study door at the University of Western Australia. He reads Child Artists of the Australian Bush by Mary Durack Miller and Florence Rutter, and learns more about the Carrolup artists, and Noongar people and their culture, from highly respected Elder Ken Colbung. He is enthralled by the Carrolup Story.

The Berndt Museum’s exhibition, Nyungar Landscapes. Aboriginal artists of the South-West: the heritage of Carrolup, Western Australia, travels nationally for eight years, becoming Australia’s longest-travelling exhibition at the time. Over 30 of the artworks exhibited are from the Collection kindly donated by Stan, Melvie and Gael Phillips.

In 2004, John Stanton’s close Australian friend Professor Howard Morphy is invited to visit Colgate University in Upper New York State by the Director of Colgate’s Picker Gallery. The Gallery set aside some Aboriginal artefacts for him to look at. When Howard arrives, the Gallery Curator, Diane Butler, mentions that they have a box labeled Australian art, but she has never opened it.

When they open the box, Howard immediately recognises a beautiful Revel Cooper drawing sitting on the top. Underneath are a large collection of Carrolup drawings. Howard is possibly the only other anthropologist to be in a position to recognise these works for what they are.’

The next section of this blog comes from our forthcoming book Aboriginal Child Artists of Carrolup:

‘John Stanton is working in his study when his mobile rings. He is surprised to see that Howard is calling very late at night from the States.

John cannot believe the find himself. He is over the moon. He immediately calls Ken Colbung to pass this wonderful news on to the Noongar community. He heads off to tell Margaret Edenburg, who is by now living in a nursing home. She is old and frail, pretty much bed-ridden. Margaret is thrilled to learn that the search is now over.

I was in tears, you know, when I spoke with Howard. I’d never believed in my lifetime… I realised that someone would find them, but I didn’t think it would happen when I was alive. So, it was a very emotional time hearing the artworks had been found, and telling Ken and Margaret.’ John Stanton interview with David Clark

Please don’t forget that you can read a summary of the whole Carrolup Story, written in 12 short articles.