Our Carrolup Talk at Casuarina Prison 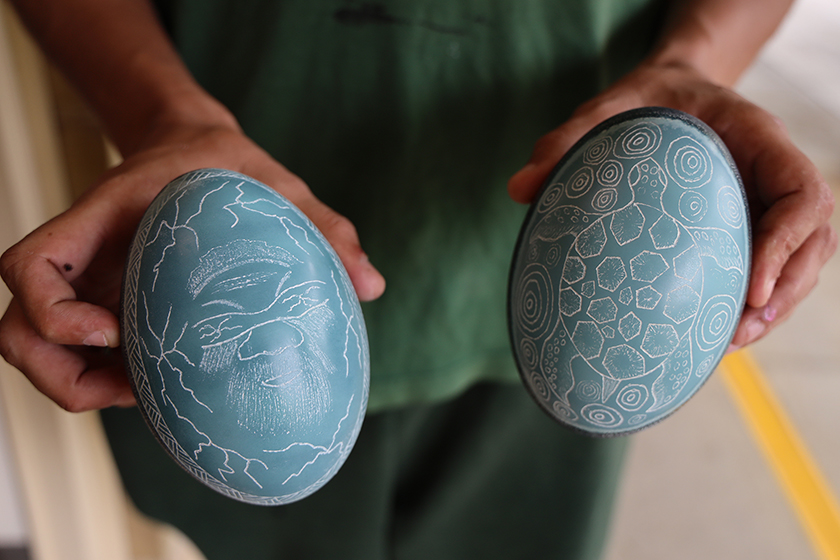 Decorated emu eggs painted by a prisoner at Casuarina Prison, south of Perth. Photographer: Member of the Department of Justice, 13th November 2020.

John and I visited Casuarina Prison, the main maximum security prison for males in Perth, on Friday, 13th November to give a talk about the Carrolup child artists and see the art class in operation. We greatly enjoyed our visit, which lasted just short of four hours.

We were invited to give the talk by the Project Training Officer who runs the art classes for prisoners. He is an artist himself and is very enthusiastic about ensuring that the prisoners are aware of the Carrolup child artists and their work.

John and I met prisoners in the art class and watched them at work. Two of the Aboriginal prisoners were related to two of the most talented Carrolup artists. It was a real pleasure talking with these guys and admiring their work. I was amazed by their talents, in particular one who proudly showed us several of his artworks. At one stage, I stepped back and just watched in fascination a room full of prisoners and education officers totally transfixed by what they were doing on their individual pieces of art. What an experience! My thanks to everyone in that room.

After a nice lunch, John and I loaded up our talks. I took a room of about 20 people through the main Carrolup story and then focused on Revel Cooper’s experiences after he left Carrolup. I’ll describe the latter part of my talk in my next blog posting. John talked about his 40 year involvement with the Carrolup story, including the time when he worked with the Marribank (formerly Carrolup) community and lived on the settlement in the 1980s.

He also described how Howard Morphy discovered Mrs Rutter’s ‘missing’ collection in Colgate University, how he (John), Ezzard Flowers and Athol Farmer travelled to Colgate to see the collection, and arrange for it to return to Noongar Boodja to be exhibited in Katanning as the Koorah Coolingah (Children Long Ago) exhibition in February 2006.

I watched the prisoners carefully as I talked and it was very clear to me they were fully engaged. I could sense strongly the feelings of pride amongst the Aboriginal prisoners. It was so good to see an audience respond in this way. John told me he saw the same engagement when he spoke. At the end of the talks, all the prisoners came up to us and thanked us for coming.

You can read more about our talk in the article Carrolup artists inspire prisoner connections to Country, written by staff of the Department of Justice. Here is an excerpt:

The Carrolup artists’ legacy continues at Casuarina. Along with producing breathtaking art and decorated emu eggs, one of the prisoners has painted a series of flora and flora signs complete with their Noongar names for each of the education centre’s classrooms.

“People who are inside are traumatised and have no feeling of self-worth. Art has healing properties,” Professor Stanton said.

“Prisoners who paint landscapes assert their link to Country and work through issues in a non-confrontational way.”

I’d like to mention one final point. Carlie Atkinson (CEO Of We Al-li Programs) revealed that over half of Aboriginal men in the prison where she carried out her PhD research suffered from post-traumatic stress disorder (PTSD), which was most likely the result of transgenerational trauma experienced by the men. It is likely that similar findings would arise from research in other prisons, such as Casuarina. It is essential that society starts to address this PTSD amongst Aboriginal (and non-Aboriginal) prisoners.

We know that being empowered and developing a strong positive identity can facilitate the healing of trauma. Connection to culture and country also facilitate healing. Connecting Aboriginal prisoners to the Carrolup Story, and encouraging them to express themselves through their artworks, facilitates healing through these latter connections.

We could further facilitate healing by allowing the prisoners to sign their own artworks so that they gain a strong sense of identity and feelings of pride.  At present, Western Australian (WA) government policy does not allow prisoners to sign their artworks. As far as I am aware, this is in contrast to the situation in other countries, such as the USA. In my humble opinion, WA’s policy needs changing. What purpose does it serve? Just think what a simple change in policy could do to help change some prisoner’s lives in a positive manner. Isn’t prison supposed to be about rehabilitation?

David Clark talking about Carrolup at Casuarina Prison on Friday, 13th November 2020. Photographer: Member of the Department of Justice.