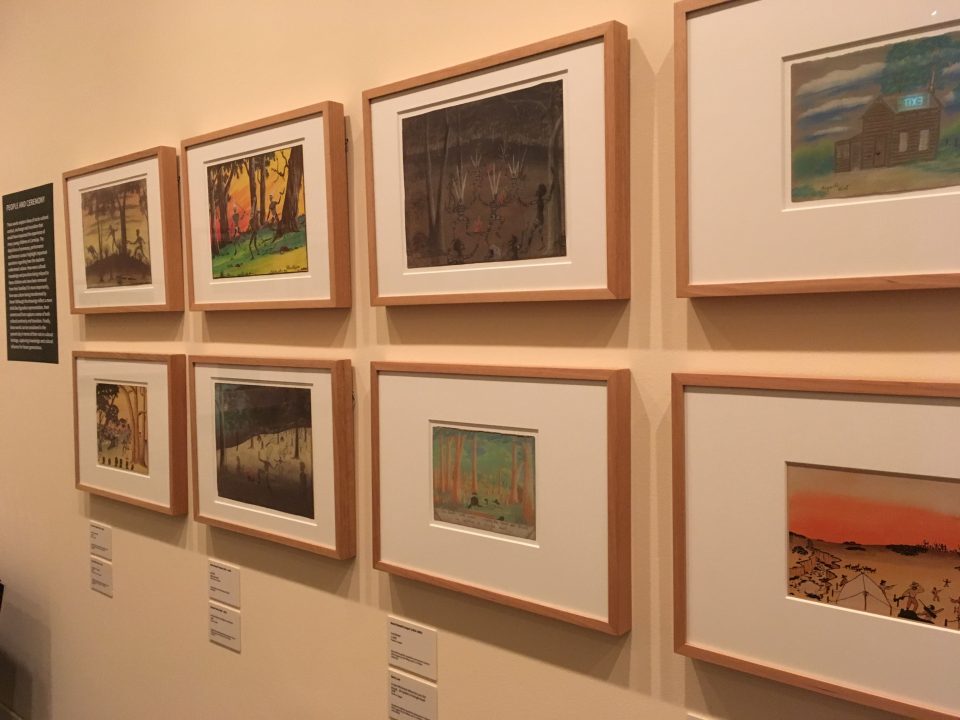 The 8th of February saw the formal opening of the Berndt Museum’s new exhibition, Carrolup Revisited, at the Lawrence Wilson Art Gallery, The University of Western Australia, which will last until the 29th of June.

It was an emotional occasion for families of the child artists present, and others who have been closely associated with telling this story over the past decades. Personally, I was deeply moved to see the works I know so intimately back up on the gallery walls, highlighting particular themes taken by the child artists in their initial pastel, ink and watercolour drawings.

The exhibition is an enthralling demonstration of the diverse styles and subject matter of individual children, as well as coherent statements of survival and enduring linkages, knowledge and appreciation of the landscapes surrounding them. The recurrent focus on the liminality of dusk reminds us that many of the works were drawn at night, the boys peeking through the windows of the dormitory in which they were locked every night. The boys also witnessed corroborees being performed by adults a short distance from Carrolup Native Settlement, away from the prying eyes of wedjela (white people)

The schoolteacher Noel White, and his wife Lily, made an enduring impact on the child artists, boys and girls alike. Their enthusiasm, passion and encouragement contributed to an early and rapid achievement of artistic success and credibility among national and international audiences, as recorded in the photographic and clippings scrapbooks held by the family. The Whites’ daughter Noelene, and her late brother Ross, have been constant supporters and benefactors to the Berndt Museum since I commenced the Carrolup Project in 1985.

The core of the Museum’s holdings of Carrolup art is a collection of some 150 pieces donated by Stan, Melvie and Gael Phillips in the early 1990s.

Stan’s fascination with the imaginative creativity of the child artists led him to assemble this collection from a diversity of sources, including original purchasers of these drawings, second hand shops, and the like. With the eye of a connoisseur, Stan assembled an enduring resource for Noongar people; indeed, for all Australians.

[You can see seven of the drawings from the Stan, Melvie and Gael Phillips Collection in the Art section of our Gallery.]

The remainder of the exhibition highlights the enduring impact and inspiration of the child artists on successive generations of South-West artists, building on the Museum’s three previous exhibitions on Carrolup: Nyungar landscapes: Aboriginal child art from the South-West, Western Australia (1992), Aboriginal artists of the South-West: past and present (2000), and Koorah Coolingah (Children Long Ago) (2006)

The staff at the Berndt Museum and, in particular my successor as Director, Dr Vanessa Russ, are to be congratulated for curating and mounting such a moving and inspiring exhibition.