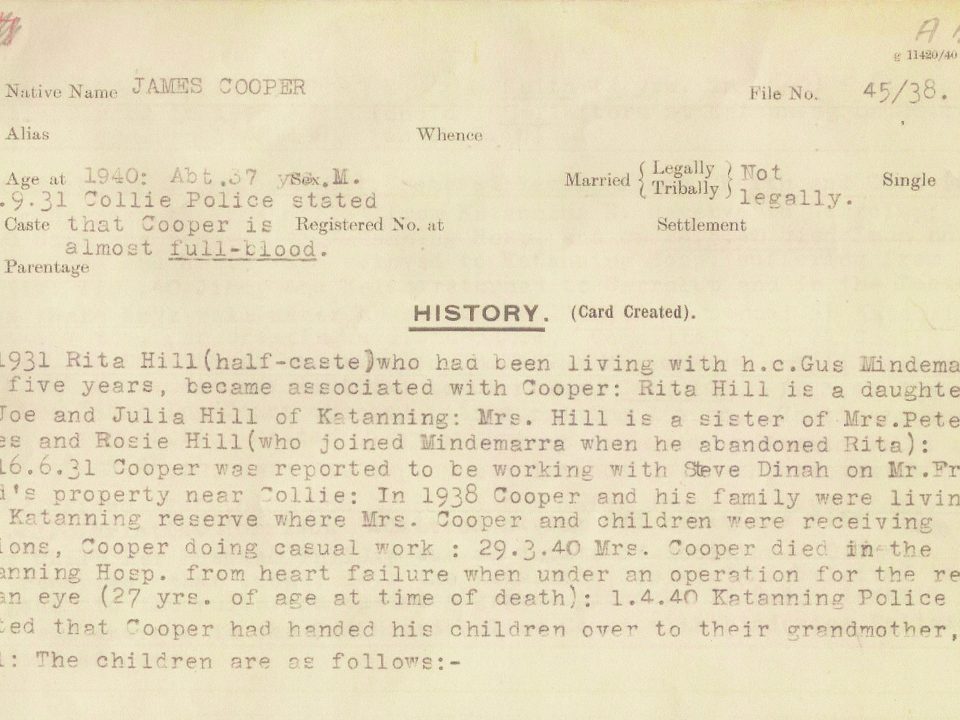 Revel Cooper became one of the most famous, if not the most famous, of the Carrolup artists. However, he lived a troubled life, despite his success as an artist. Revel spent many years in and out of prison in Western Australia and Victoria. He also suffered from a drinking problem, which did little to help him avoid spending time behind bars.

Revel’s life ended tragically when he was murdered in 1983. His body was not found until 1985. He was eventually buried in 1987 in Victoria thousands of miles away from his homeland and family.

In an earlier blog, I introduced a description that Revel wrote in 1960 about the early years he spent in the squalor of Carrolup Native Settlement. But how did Revel end up at Carrolup?

Most of the children at Carrolup had been taken away from their parents as part of government policy. Revel’s situation was slightly different, albeit just as damaging to his psychological make-up, if not worse. The details I report below are primarily taken from a Department of Native Affairs file on Revel’s father, James Cooper.

Rita Hill, Revel’s mother, died in Katanning Hospital on the 29th March 1940 during an operation to remove an eye. Three days later, Katanning police reported that James Cooper ‘had handed over his children to their grandmother, Mrs. Hill’. Mrs Hill was Rita’s mother, formerly Julia Mourish, who was married to Joseph Hill.

On the 5th May 1940, the four boys and their grandparents were removed from Katanning Native Reserve where they were living and taken to Carrolup Native Settlement.

All three Cooper boys were now Wards of State living at Carrolup. Their grandparents were living on the other side of the river to the Settlement and did not have free access to the children. We have no idea how long the Hills stayed at Carrolup. Maudie Cooper was ‘admitted to’ Carrolup on 31st December 1940.

Revel’s early life was certainly tough, losing his mother and a baby brother, losing contact with his father, and being taken from his maternal grandparents to live in the squalor and control of a government native settlement.

[1] In his 1960 description, Revel says he was six (not five) years old when he was made a Ward of State and sent to Carrolup. This age is consistent with that noted in the genealogical report that Jan James (formerly Goodacre) provided for me in relation to Revel’s ancestry.

Interestingly, I have seen letters sent out by the Department of Native Affairs in the early 1950s trying to determine whether Revel Cooper was born in 1934 or 1935. As far as I am aware, they never found the answer. This is not surprising since there were no birth certificates or other records of when many Aboriginal children were born at this time and in earlier years.

[2] Jan James’s ancestry report for Revel Cooper reveals that Rita Hill had another child who was not reported in the Native Affairs document for James Cooper shown above. Kylie Cooper was born in 1933 and died due to ‘gastroenteritis, dehydration and heart failure’ on 23rd May 1940, eight weeks after her mother and a day after her baby brother Carl passed away. If these records are correct, then Revel lost his mother and two younger siblings in a period of eight weeks. 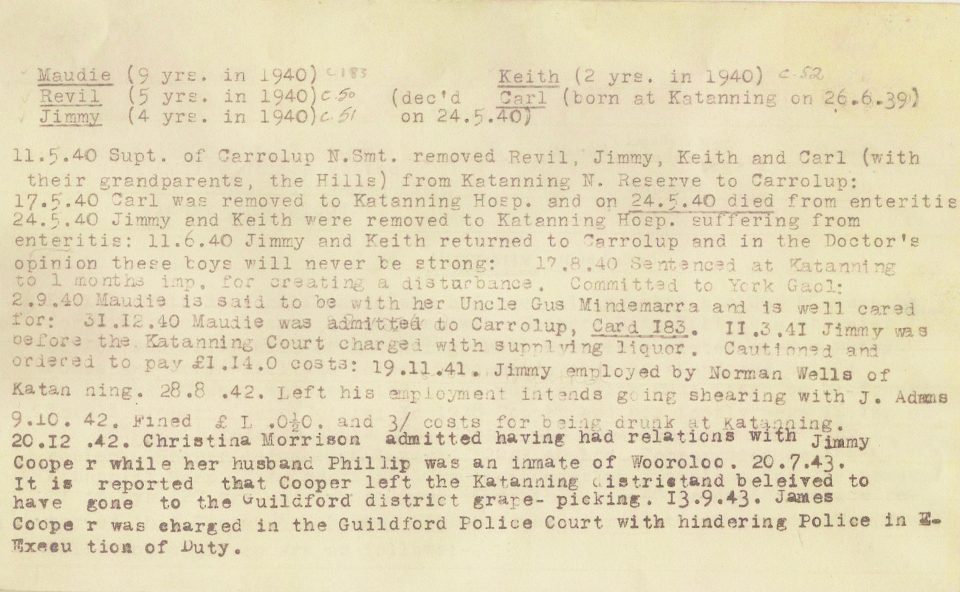 I am very grateful to Cathy Coomer and Jan James, two of the most inspiring people I have met on my journey into learning about the children of Carrolup. Cathy, niece of Revel Cooper, provided important information about her ‘Uncle Revel’, whilst Jan provided a genealogical report related to the Carrolup artist.