A pastel by Reynold Hart donated to the Berndt Museum by Timothy Dauth. This is likely The Red Road which was drawn in 1950 and was purchased at the 1957 Boans exhibition organised by the W.A. Native Welfare Council (Inc.).

When I commenced the Carrolup Project back in 1985, one of its purposes was to flush out surviving drawings and paintings by the child artists of Carrolup.

Media coverage in the Great Southern Herald, the Katanning newspaper, assisted in this task. When the Noongar trainees Tina Hansen and Cora Farmer travelled with me around the South-West, with the Berndt Museum’s copying stand in the back of my old burgundy EH Holden, with it’s white top, we copied artworks held by families, and others 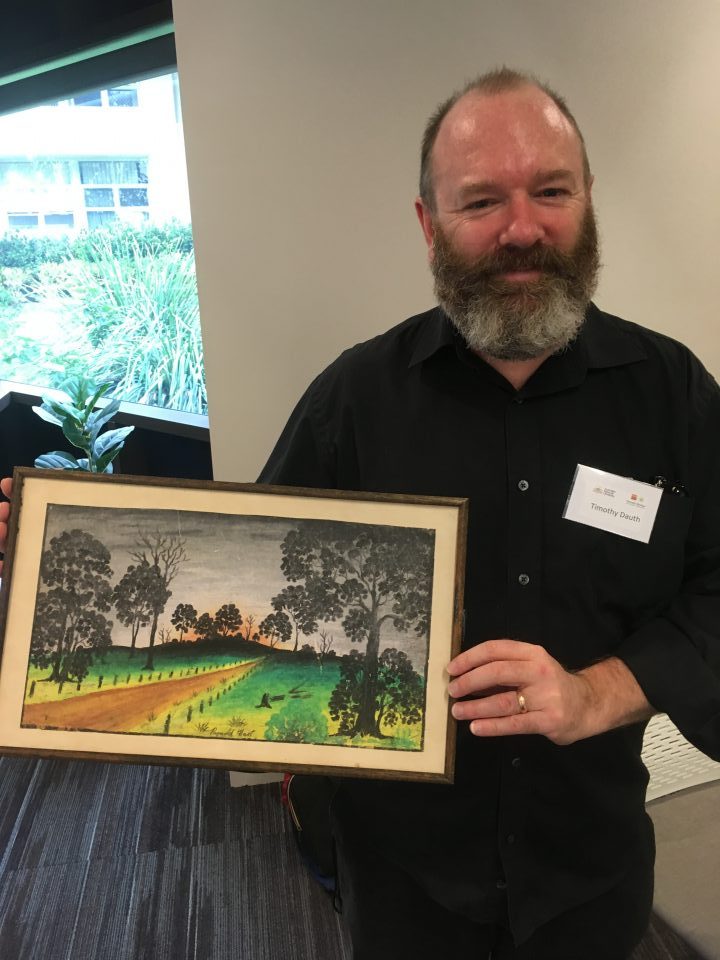 Sometimes we were given artworks for the Berndt Museum, which was called the Anthropology Research Museum in those days. Prints were then made for the Marribank Cultural Centre, as there was little security and no air conditioning for the precious originals.

At the recent Centre of Native Title Anthropology (CNTA) Workshop that I attended, one of the participants came forward. His name was Timothy Dauth.

Tim’s grandparents were Elsie and Cyril Gare, whose family had a few years ago presented the Berndt Museum with an important collection of photos and movie film relating to the Allowah Grove Aboriginal settlement in Redcliffe, Perth, during the period of the 1950s and 1960s. It was where the Perth Airport now stands.

This resulted in the national travelling exhibition, through Visions Australia, On the Outskirts: Photographs of Allowah Grove Aboriginal Settlement, Perth (2005).

At the CNTA workshop, Tim presented me with a painting for the Berndt Museum by Reynold Hart, which his grandmother had purchased at one of the exhibitions of Carrolup art held at Boans department store.

David Clark has done some research, and found a list of works that were exhibited at the 1957 Boans exhibition organised by the W.A. Native Welfare Council (Inc.). This exhibition included art by Albert Namatjira, as well as some older artworks (Reynold Hart, Parnell Dempster, Milton Jackson and Barry Loo) and newer pastels (Revel Cooper, Parnell Dempster and Reynold Hart) done by Carrolup artists. We believe this work to be ‘Item 25, The Red Road, Reynold Hart 1950’.

I transferred the painting to the Berndt on the same day.