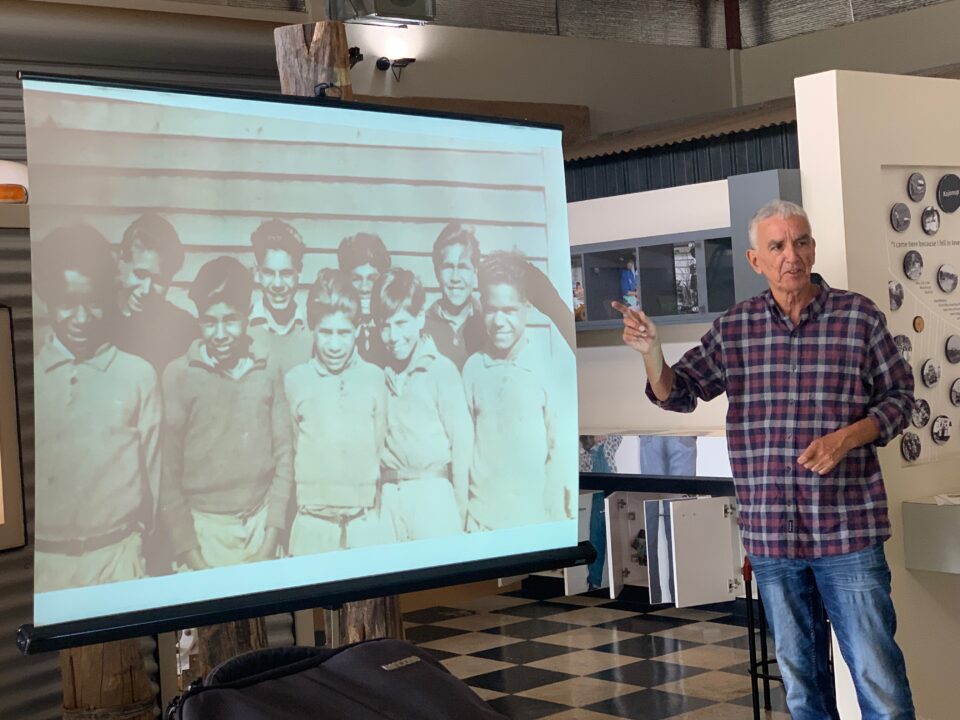 I only realised this week that I had forgotten to post a blog about the talks that John Stanton, Ezzard Flowers and I gave about the Carrolup child artists at The Kodja Place in Kojonup on the 8th of October 2020. We had been invited to give the talks by John Benn, the Shire President.

Some of you might remember an old blog I posted about one of our previous trips to The Kodja Place. I explained that John’s mother, Myrtle Benn, was a teacher and landscape artist. In 1947 and 1948, she took John and his fellow pupils to the school at Carrolup Native Settlement where the met the Aboriginal child artists. John would have been seven and eight years old at the time. How amazing to think he would have met youngsters like Parnell Dempster, Revel Cooper and Reynold Hart. 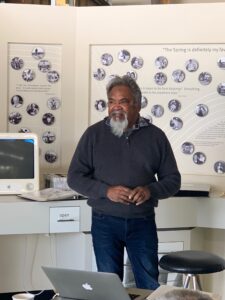 Anyway, we had agreed with John to come and talk at The Kodja Place after our book was published. We also asked Ezzard Flowers if he would speak with us. Ezzard was one of the two Noongar men—the other was Athol Farmer—who travelled to Colgate University with John Stanton in 2005 to see Mrs Rutter’s ‘lost’ collection. They arranged with Colgate University to have the finest pieces of art exhibited in Katanning in February, 2006.

John and I drove down with our friend Mike Scott on the day, stopping off for a tasty pie in The Woolshed in Williams. We had a small audience due to Covid restrictions and the fact that a few invitees did not turn up. However, members of the audience were but enthusiastic and very appreciative. Amongst the audience was Jack Cox, whose three younger brothers were all in the school at Carrolup.

All three of us really enjoyed giving our talks. After introducing myself and describing my background, I related the backdrop to the story (colonisation) and introduced Revel Cooper’s family and his written description of life at Carrolup. I described the story of how Noel White inspired the Aboriginal children, how their art developed, and how it was exhibited locally and then in Australasia and Europe thanks to Mrs Florence Rutter.

I then described how the school was closed by the Department of Native Affairs in 1950, the outcry that followed, and how we had managed to trace the stories of Parnell Dempster, Reynold Hart and Revel Cooper for some years after the closure. I ended up by talking about how Noel White had connected with the children, who were clearly traumatised when he arrived, and helped them heal. I did this by focusing on the emotional needs of humans. You can find a pdf of my talk here. 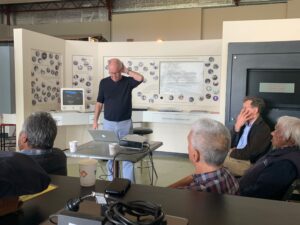 John gave a summary of his 40-year journey focused on the Carrolup story and the children’s beautiful drawings. How he lived at Marribank (formerly Carrolup) in the 1980s and helped develop a Cultural Centre there. How he organised the Koorah Coolingah Exhibition and how his friend Professor Howard Morphy had discovered Mrs Rutter’s lost collection at Colgate. And the impact the art had when it returned for the exhibition at Katanning.

Ezzard Flowers also talked about the trip that he, Athol and John took to Colgate to see the Carrolup artworks. He described the incredible emotions the three of them felt when they first saw the art. What it meant for a Noongar man to see these drawings after they had been lost for so long. And what it meant to him and his people to have the art return to Katanning in 2006. He described the discussions the three of them had with Colgate staff about the art returning ‘home’ for this initial exhibition.

I felt very emotional listening to Ezzard, as did other members of the audience. He is a powerful speaker and a wonderful man. I just wish we had filmed Ezzard’s talk. I have included a film clip of Ezzard talking at the opening of the Koorah Coolingah Exhibition in 2006.

The talks and discussion went on for so long, over two hours, that we nearly missed lunch. The cafe was just closing when we finally arrived, but we were able to buy some sandwiches and drinks (thank you, the Shire). The interesting conversation continued. John and I offered to help The Kodja Place put together a permanent Carrolup exhibition in the future.

It was a wonderful day and the three three of us really enjoyed ourselves. Thank you for the invite, John Benn. Many thanks to Kristel Thomson for organising the event.