Mary Durack Miller, in association with Florence Rutter, wrote a book about the Aboriginal child artists of Carrolup entitled, Child Artists of the Australian Bush, which was published in June 1952. 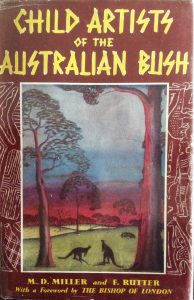 Cover of the book Child Artists of the Australian Bush by Mary Durack Miller and Florence Rutter, published in 1952.

Florence Rutter met the child artists through her two visits to Carrolup in 1949 and 1950 and exhibited their artworks in Europe in the early 1950s. She had first met Mary Durack Miller during her stay in Perth. Mary came to know Parnell Dempster and Reynold Hart, as well as Carrolup teacher Noel White, after Carrolup School closed at the end of 1950.

Noel White had arrived at Carrolup in May 1946 to find the children uncommunicative and fearful. They had been traumatised by their life experiences. Noel introduced a unique program of education and personal development that helped transform the children. Drawing, music, dancing, drama and story-telling were key to facilitating connection and communication, as was Mr. White’s empathy. The children lost their fear and gained confidence, whilst their reading, writing and arithmetic improved greatly.

Their drawings, done in crayons or chalk, developed out of this education program. The drawings kept improving as a result of regular bush rambles, hard work, and Noel White’s inspiration and feedback. The children developed as a group, through a process of discussion, criticism and support.

Noel wrote notes about some of the child artists for Mary Durack Miller, which formed the basis of a number of paragraphs she wrote in her and Florence’s book Child Artists of the Australian Bush:

‘Inspectors had already taken some of Reynold Hart’s exercise books, scrupulously neat and clean, for display to other schools. All Reynold’s work was of a high standard, and he himself had been quick to learn lessons of cleanliness and deportment. Gentle, alert, and intelligent, he attracted the attention and commendation of inspectors and other visitors. Reynold was probably the brightest of the group from an intellectual point of view, and many consider his work to have somewhat excelled the rest. 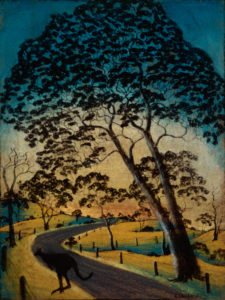 Landscape by Claude Kelly, pastel on paper, 38 x 29 cm, 1949. Submitted as an exhibit for the International Seminar on Rural Education sponsored by UNESCO held at Mysore, India, in November 1949. Stan, Melvie and Gael Phillips Collection 1947 – 65, Berndt Museum of Anthropology, The University of Western Australia. [WU7322]

Revel Cooper probably ran him a close second. In many respects Revel’s work was more imaginative, though on the whole it lacked the painstaking finish of the quieter and more gentle Reynold. Revel was a strong, burly lad of vital, volatile, and artistic temperament. He and Barry Loo were perhaps the most ambitious of the group.

Barry, a good looking, rather reserved boy, showed great promise at this time, though he was not as easy to know and understand as most of his companions. Shrewd, sensitive, and proud, he was somewhat slower to give trust and confidence, and his teachers found themselves wondering how he would fare in a world that still looked for a measure of subservience in its coloured people.

Parnell Dempster, no doubt owing to a somewhat chequered career, was no star scholar, but his good nature and co-operation were indispensable to his teachers. Although one of the most talented young artists, he showed no desire to excel his companions. His ambition wavered, at this time, between wanting to become a baker and yearning to drive a wheat-lorry.

Claude Kelly, a tall young stripling, was also producing some outstanding art-work, though his unfortunate background seemed likely to always exercise an unstabilizing effect on his career. His health and eyesight also were indifferent.

Cliff Ryder’s name was appearing on some of the best pictures, and his manual work, at a country show, had been judged the best of any child in the Katanning district. A serious, sincere, boy, he listened attentively to his lessons, always intent on pleasing and doing the right thing.’ The Aboriginal Child Artists of Carrolup, M.D. Miller & F. Rutter, Australasian Publishing Co. Pty. Ltd & George G. Harrap & Co. Ltd, U.K, pp. 48 – 49.

An additional comment about Claude Kelly. In the School Journal entry of April 14th 1949, Noel White writes, ‘On Good Friday the school was closed. Claude Kelly one of the good artists is having trouble with his eyes, so he is forced to leave school.’

He was also of the age that the Aboriginal children had to leave the school. Noelene White, daughter of Noel White, said to me about Claude:

One artist I remember fondly is Claude Kelly. I found him to have a gentle manner. His art was wonderful, different to the other boys – well, at least at that stage of his development. I particularly remember the vivid colours in his drawings.’

Over time, we’ll write more about the individual young artists. We already have additional information and hope to find even more as we continue our research.