‘Drawing as the Necessary Means of Communication’ 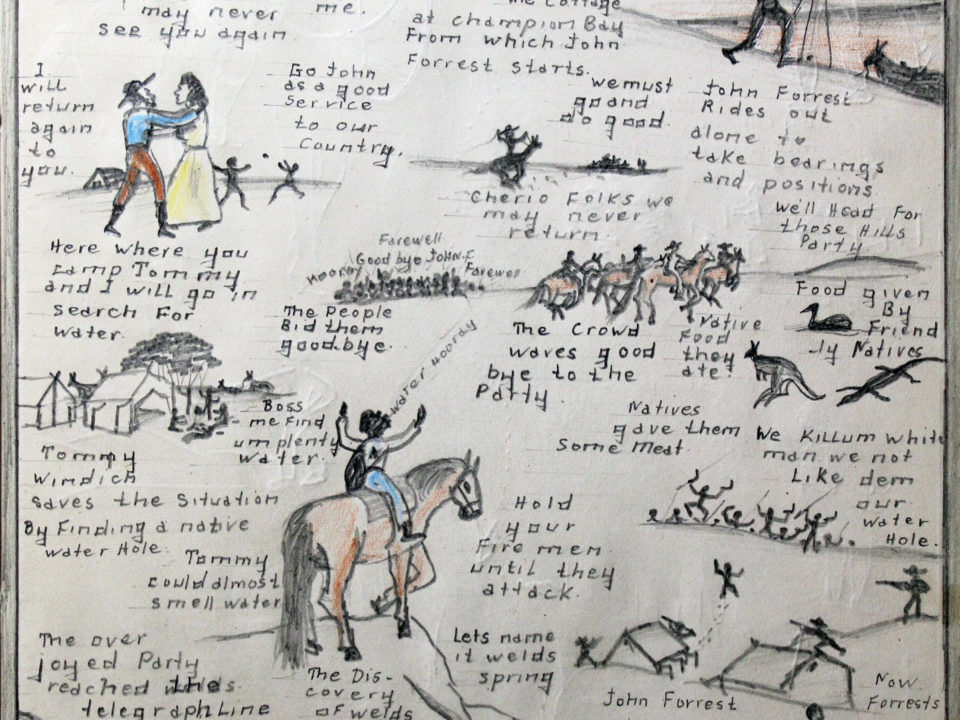 In a previous blog, I have described part of the role played by School Inspector Charles ‘Sammy’ Crabbe in the development of the Carrolup children’s drawings and their schoolwork. I have also summarised the pivotal role that teacher Noel White played in connecting with the traumatised Aboriginal children, and facilitating the development of their art and schoolwork. In this blog post, I look further at these developments using sections of my eBook Connection: Aboriginal Child Artists Captivate Europe.

When Noel White first met the children, he was unable to connect with them at all as they were so fearful. They sat silently and sullenly in the classroom. Mr White was at his wits’ end.

Soon after taking up his appointment, Noel travelled to Katanning to meet with Department of Education Inspector Charles ‘Sammy’ Crabbe, whose kind understanding of Aboriginal children and their problems were well-known throughout the state. The two men, who had become close friends in the past, discussed a strategy for facilitating communication between teacher and pupils, as well as the best way forward for educating the children.

Some years later, in 1951, Mr Crabbe wrote a letter to Dr Kenneth Cunningham, Director of the Australian Council of Educational Research, describing the early development of the children’s art [1,2]. These sections of my book contain some excerpts from this letter, as well as quotes from child artists Barry Loo and Revel Cooper, as well as Noel White himself.

“Drawing is used as a preliminary basis for all language and vocabulary work, in all the school subjects. It helps facilitate communication with the children and helps Mr White see whether a pupil is absorbing information. As Mr Crabbe says in his letter to Dr Cunningham (p. 2):

‘Words were considered of uncertain value but sketches should show meaning.’

The children are encouraged to draw their experiences, and talk over and act out simple incidents. Initially, they talk about their drawings and later use the written word to describe some element of their drawing. The children are encouraged to keep all their writing neat, clean and careful. They turn out to be great copyists of Mr White’s printing.

Gradually, Mr White helps the children overcome their fear and shyness, and instils confidence and optimism in his charges. There are definite improvements in the children’s speech, reading and arithmetic over the following months, as well as in their hygiene and manners.

In his reflections on Carrolup, Revel Cooper says of his teacher:

‘At first we hated him because Mr White as gentle as he was stood for no noncense {sic}. He soon won our confidence and respect, for Mr White was more than a teacher to us.’ [3]

Mr White takes the Carrolup children for regular rambles in the surrounding bush as part of their nature studies, telling them that they should note what they see, as they will be drawing the landscape in class the next day. As they walk around the bush, Noel points out various animals, trees and plants.

‘In school we used to have one nature lesson a week, the afternoon before the day, Mr White the school teacher used to take us for a ramble in the bush and in that way we found and learnt the rare things of nature, the next day we would illustrate everything we saw on the ramble.’ Letter from Barry Loo to Florence Rutter, 20th September 1950. In: Florence Rutter, Little Black Fingers, 1950, p. 9

‘I regard the nature study as an integral part of the drawing because it is during these rambles that they made their sketches of kangaroos, rabbits, goannas, etc., that they later used in their Art work.’ Letter from Charles S Crabbe to Dr Cunningham, 27th June 1951, p. 2…

… Noel White reflects on his approach to educating Aboriginal children in at least two communications:

‘In the question of education this medium can be used in self expression as in drawing small pictures of life experiences. Once interest is gained, then by systematic planning, interest can be maintained in teaching written characters and drawing the pictures the word conveys. Gradually they write and explain what they have drawn. This method can be extended to number work & the study of Arithmetic.’ Noel & Lily White Collection [4]

‘In Hygiene lessons the actual facts are taught as a lesson, but when the child is given the opportunity of illustrating the lesson as a Project, his own ideas and drawings are used, based on the lessons he has learned. This method is applied to History, Geography and Nature Study as well. The comments around each drawing are entirely original. If you had a number of books on the same subject you would find them all different.’ Typed extracts of letter from Noel White to Florence Rutter, 25th March 1950 [5]

‘I feel that to evaluate the Art work in its true perspective, we should see it was as only one aspect of a school curriculum that used drawing as the necessary means of communication in almost every subject. I regard the children’s love of singing, their choral work, dramatisations, their nature study rambles, etc, as part of the Art development. I claim that the teacher who tried to link all of his teaching with the life and interests of these children must have developed an environment that helped to release the creative urge in these children. If they had been taught their special studies, and skill subjects by humdrum methods, they would never have developed their spectacular work in art.’ Letter from Charles S Crabbe to Dr Cunningham, 27th June 1951, p. 4″ Connection: Aboriginal Child Artists Captivate Europe. David Clark, in association with John Stanton. Copyright © 2020 by David Clark

[2] Ironically, Dr Cunningham was a postwar president of the Eugenic Society of Victoria.

[4] Approach to School Work, Noel White’s Reflections. This paragraph is part of a series of hand-written notes that Noel White made in Lily White’s book of memorabilia related to Carrolup. We’re not sure when they were written, but probably during the later stage of his time at Carrolup. Noel & Lily White Collection.

NB. We have none of the early drawings used to facilitate communication and the development of the schoolwork. The schoolbook page shown above is from a later period at Carrolup, probably 1948/49. Click on image to see full page.