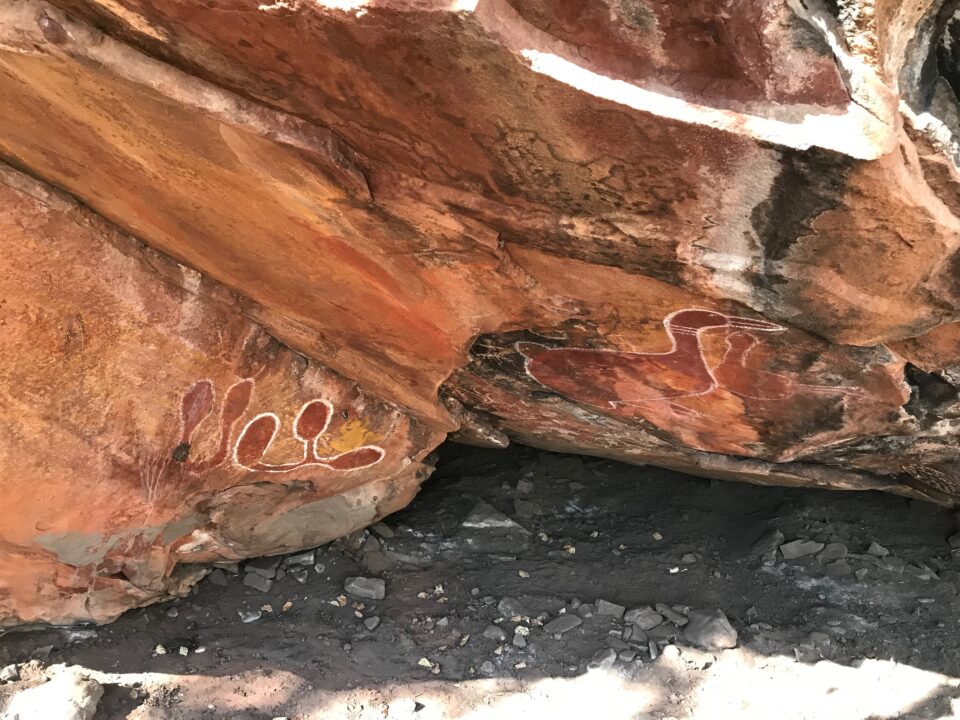 Photograph of Aboriginal rock art, taken in the Northern Territory on my tour from Darwin to Broome, 22nd August 2018.

I have another website, Recovery Stories, which focuses on recovery from addiction and mental health problems. One section of the website, labelled Healing, takes you on a journey that focuses on the healing of intergenerational trauma. I have arranged this section so that a person can start with my first (earliest) post, Indigenous Trauma and Healing, and work their way through the remainder by clicking the link at the end of each post.

At present, there are sixteen posts, mostly relating to intergenerational trauma (rather than healing) at this stage. I will gradually add more and more posts over time. Below, is the current list. I hope you enjoy.

Indigenous Trauma and Healing: Describes how I became inspired in this field and activities in which I have been engaged, including development of Sharing Culture and The Carrolup Story.

The Value of Deep Listening: The Aboriginal Gift to the Nation—Judy Atkinson: At the core of this moving talk, Judy describes her approach to healing. It’s about listening.

12 Principles of Indigenous Healing: I summarise what I consider to be 12 principles of healing relevant to Aboriginal people here in Australia and other Indigenous peoples around the world.

Intergenerational Trauma: Trauma that has arisen as a result of the historical experiences of colonisation (and associated violence and control), forcible removal of children, and loss of culture.

The Impact of Colonisation: Control of Indigenous peoples by the coloniser was facilitated by overt physical violence, covert structural violence, and psychosocial domination.

The Stolen Generations: The past government policy of removing Australian Aboriginal and Torres Strait Islander children from their families is one of Australia’s best kept ‘secrets’.

The ‘Bringing them home’ Documentary:  Focuses on the history of the forced removal of Aboriginal and Torres Strait Islander children from their families in Australia.

My stolen childhood, and a life to rebuild: Sheila Humphries: Talk about a child who was taken from her parents and placed in an orphanage by authorities who thought they knew best.

How Trauma Flows Through the Generations: Sociological and psychological conditions are established by the systems and structures that triggered the original trauma in previous generations.

Ruby’s Story: Marion Kickett: Marion describes how Ruby forgave people who caused her early harrowing life experiences, and in doing so began a healing process and realised a dream.

Judy Atkinson: Reflecting on Historical Trauma and its Consequences: In her talk, Judy describes how she has been talking about these matters all around Australia for 25 years (longer now).

Joe Solanto: Intergenerational Trauma Amongst First Nations People of Canada: How trauma is transmitted across generations, and why social problems are understandable responses to trauma.

Don Coyhis: What the Boarding Schools Did to Our Community: Don initially describes Native Indian culture and communities before the issues that arose from intergenerational trauma.

Shocking History Impacts on the Health and Wellbeing of Indigenous Peoples: Marion Kickett relates how and why Noongar children in York were not allowed to swim in a particular area of the local river.

Society is Failing to Tackle Historical Trauma: The bureaucratic interventions of the state—the processes of law, social welfare, and health care—have not addressed the core issue of trauma.

Severe Dysfunction in Some Levels of Government: Judy Atkinson describes presenting a project proposal to government departments in Canberra, along with the stunning responses she received.

Some of these posts are repeats of blog posts on this website. Others are not duplicated.