Identifying the Children of Carrolup 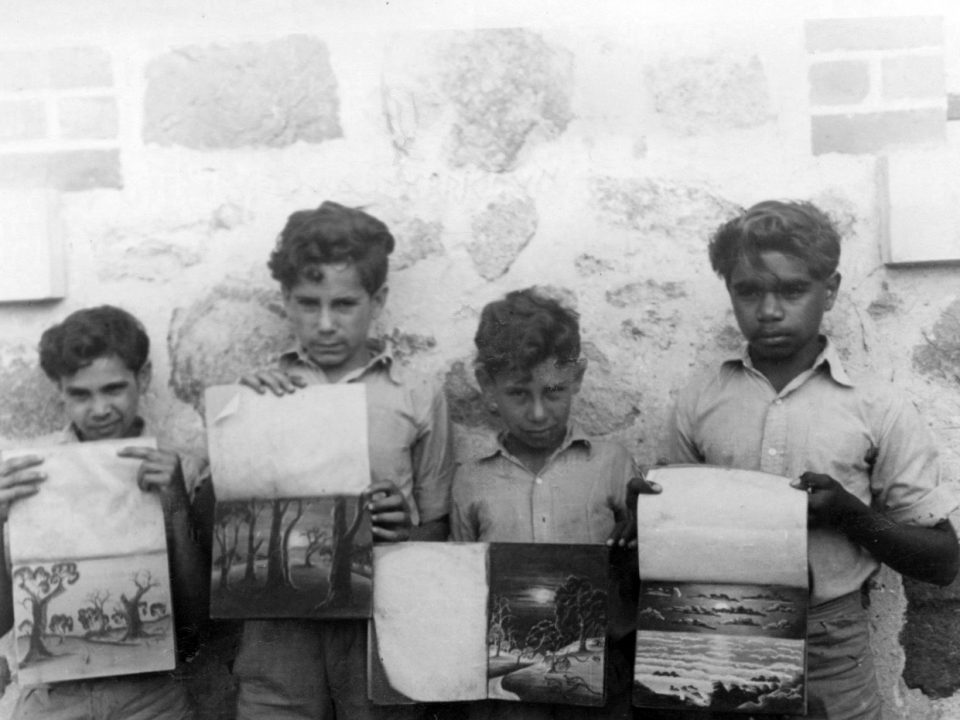 ﻿An important aim of our project has been to connect people today with ‘content’ relating to family members who were at Carrolup all those years ago. This content may take the form of photographs, the children’s drawings and letters, or documents from various sources.

Last week, I posted a photograph of four Aboriginal boys holding drawings that was taken by Mrs Vera Hack on the 1st February 1950. Mrs Hack had driven down from Perth with 71-year old Englishwoman  Mrs Florence Rutter to visit the children of Carrolup and their teachers Noel and Lily White. 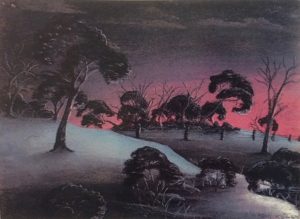 Mrs Rutter had previously visited the children briefly in July 1949. She purchased £5 worth of the boys’ drawings and girls’ designs and exhibited them in eight cities around Australia and New Zealand between August 1949 and January 1950. She now wanted to see the children again, although the girls had recently been moved from Carrolup, to either Roelands Mission or Francis Xavier’s Mission at Wandering Brook depending on their religion. The two ladies had stopped in for a short time at Francis Xavier’s Mission on the way down to Katanning.

Mrs Rutter and Hack spent three nights in Katanning, travelling each day to Carrolup Native Settlement. They received a rousing welcome from the boys when they arrived on the morning of the 31st of January. The ladies joyfully distributed gifts of chocolate, pastels, crayons and paints to the boys, which were well-received. Mrs Rutter told the boys how well their work had been received around Australia and New Zealand. She showed them photographs of people admiring their work when hung in exhibition in the various cities. Mrs Rutter said of the boys:

During the three days we spent at Carrolup we were able to watch the boys both at work and play. Speaking for myself I must relate how delighted and surprised I was with their behaviour. In every way they were exemplary – attentive, interested, appreciative, grateful, polite, unselfish, sporting and physically courageous. I hope that my own grandchildren will develop these traits as definitely as these little aboriginal boys.’ Florence Rutter, Little Black Fingers, 1951, p. 5

Noel White encouraged some of the boys to do a drawing for their guests. This the boys did enthusiastically, much to the great admiration of Mrs Hack and Mrs Rutter. On the second day of the visit, Mrs Hack took a number of photographs of the Carrolup boys. The photo above is one of those taken.

As John and I did not know the identity of the four boys, I decided to post the photograph on our two Facebook pages and on the Sandgropers History – Patrick Bynder’s Legacy Facebook page with the message:

Does anyone recognise any of these boys? Photograph taken by Vera Hack at Carrolup on January 31st, 1950 during Mrs Rutter’s 2nd visit.’ [NB. The photograph was probably taken 1st February 1950] 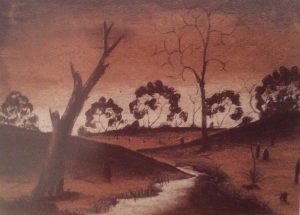 I quickly received a reply from Stephanie Williams identifying the boy on the right as ‘Uncle’ Simpson (Simpson Kelly). I sent Stephanie another photograph of Simpson holding a drawing, which Merv Kelly—son of talented artist Greg Kelly and grandson of the ‘matriarch’ of Noongar art, Bella Kelly—had previously confirmed as being of Simpson.

Grace Kelly confirmed the boy on the right was her father, Simpson. I posted a copy of Simpson’s magical drawing The Creek on the Facebook page for Grace to see in case she had never seen it (please see above).

Meanwhile, Judy Ryder had posted on the same Facebook page to say that the boy second from the left was Cliff Ryder, her father. June Headland also posted a message about Cliff Ryder.

I sent Judy a copy of a two-page letter I had that Cliff Ryder had sent to Mrs Rutter in the UK in March 1950. [More of this letter in a  future blog posting.]

Soon after, Sherma Marilyn Gillespie wrote to say that the boy on the left was ‘pop Thomas Jackamarra my nanna’s brother.’ This fact was confirmed by Nolene Oliver. By now, I was thrilled by these connections. 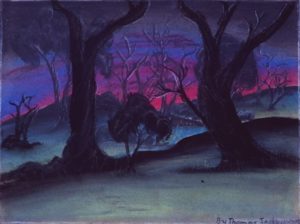 I posted to the Facebook page a pastel drawing by Thomas Jackamarra so that Sherma could see. She loved the colours of the drawing. I also messaged her copies of some other photographs owned by Noel White’s daughter Noelene, taken by Vera Hack, to see if she could recognise her ‘pop’ in them. She could not, but will show the photos around.

I also sent Sherma the words of a letter that Thomas Jackamarra had sent Mrs Rutter in the UK. I did not have a copy of the original letter, but the words were written in Mrs Rutter’s booklet Little Black Fingers. [‘Black’ here refers to the pastel colouring on the children’s fingers.] I also sent a copy of a note showing that Thomas was at Carrolup School in January 1950.

So we now had the identity of three of the boys in the photograph and I hope we will later have the fourth name. For now, I can write a new caption for future showing of the photograph: ‘Four Carrolup boys with their pastel drawing books. From the Left: Thomas Jackamarra, Cliff Ryder, unidentified and Simpson Kelly. Photographer: Vera Hack, February 1st 1950. Noel & Lily White Collection.’

Coincidentally, as I started writing this blog first thing this morning, I received a lovely Facebook message from Judy Ryder, daughter of Cliff Ryder. I was deeply touched by what Jody had to say. I sent her a photograph of one her dad’s drawings. She has given me permission to post her message here:

Thank you so much David for these letters. I’m very tearful at the moment (tears of joy). You don’t know how much these letters mean to me and my other 4 siblings. I’m for ever grateful. We do not have a lot of info or much memories of our Dad’s journey when he was young. God bless you and please keep in touch if you have any more findings.’

What a way to start the day! Thank you, Judy. And thank you all the other people who have responded to our posting of the photograph of four of the amazing boys of Carrolup. And thank you to the people who run the Sandgropers History – Patrick Bynder’s Legacy Facebook page