Learning About Noel White: A Shock 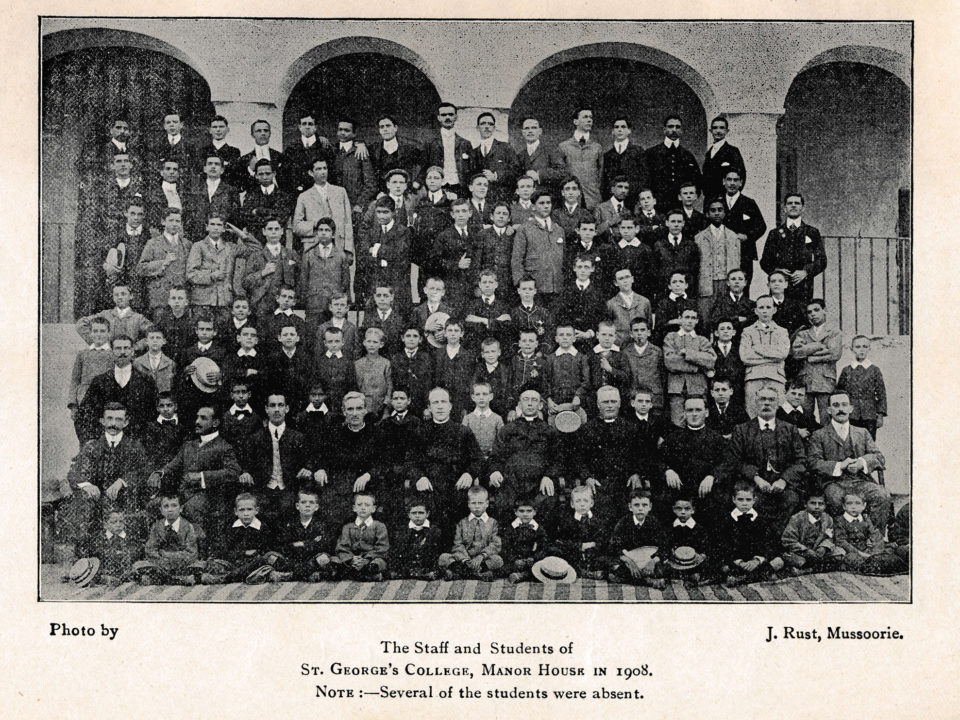 Staff and pupils of the school that Noel White attended in Mussoorie, India. Noel was a pupil at this time, but we are unable to identify him. Photographer: J. Rust. St. George's College, Manor House, Mussoorie, Christmas Annual 1908-09.

In a previous blog post, I described the pivotal role that teacher Noel White played in the development of the art of the Aboriginal children at Carrolup Native Settlement. I have also written about Noel White’s life from the time he came to Western Australia from the Eastern States. But what about his earlier life?

A few years ago when I was visiting Noel’s eldest daughter Noelene to discuss life at Carrolup and look through all her family’s memorabilia, I asked her if she had any recording of her father’s voice. She thought she did, but wasn’t sure where. I got the same response the next couple of times I asked.

One day, when I was visiting with my friend Phil Strachan, Noelene responded differently. She thrust a cassette tape towards me and then went to put it in a cassette player. She said the tape was made by Noel and Lily in the early 1960s for their other daughter Janette (commonly known as Jenny) and her family in the Netherlands. Phil and I stopped her putting the tape in the cassette player, explaining it might be fragile and break. We offered to have the tape digitised by professionals who Phil knew, and Noel agreed.

I got a real shock when I heard Noel’s voice. But my reaction was a lot less than John’s when I played him the recording.  He had known Noelene since the mid-1980s, but had never heard Noel’s voice. He nearly fell off his seat when he heard Noel speaking in what I can only describe as an Anglo-Indian accent. He was born in what was then the British colony of Burma, which was part of the British run-state in India, the Empire of India.

Here is what I had to say about Noel White’s background in my book Connection: Aboriginal Child Artists Captivate Europe.

“Noel Hounsfield White was born on the 25th of November 1900, in Mandalay, British Burma (now Myanmar), just opposite what was King Thebaw’s palace [1]. His parents, George and Eugenia White, lived in Rangoon (Yangon), but headed north to the cooler climate of Mandalay for Noel’s birth.

Noel’s father was British and worked in the Rangoon Port Authority, whilst his mother was an Anglo-Burmese woman. Noel was the oldest of seven siblings; he had one sister and five brothers.

When Noel was seven years old, his parents sent him to St George’s College in Mussoorie, India [2]. This school was founded in 1853 by the Capuchin Fathers who handed it over to the Society of the Reverend Brothers of St. Patrick (Ireland) in 1894. Mussoorie is located in the foothills of the Garhwal Himalayan range, about 180 miles (290 kms) north of New Delhi.

Noel travelled home, a distance of around 2,400 miles (3,800 kms), every Christmas. How he made this journey, we have no idea. However, Noel later told his son Ross (who told his sister Noelene) that he had once been ‘lost’ for six weeks in India. He was found by an uncle in Calcutta (Kolkata), having been living on the streets of this city [3].

Noel hated being at St George’s because, he said, the teachers were very cruel. The boys were regularly beaten badly, across the backside or legs with a cane, for even the slightest misdemeanour. There was no one the boys could talk to about the cruelty at the school. Noel was so incensed by this treatment, he broke every window in the classroom just prior to leaving the school a last time in his early teens.

Noel joined the Army Reserve in Burma in his mid-teens. We know nothing else about his life in Burma.

Noel’s parents decided that he had no prospects in Burma and they were concerned that he would end up marrying a Burmese woman if he stayed in the country. Noel wanted to be a Church Minister and he decided to go to Avondale College in New South Wales, Australia, which was affiliated with the Seventh-day Adventist Church. He left by ship for Australia, travelling steerage class, sometime in 1919. The metal trunk Noel took to Australia remains in Noelene’s possession today.

Noel’s father claimed to have sent Noel’s fees to Avondale College, but they never received the money. Therefore, Noel became a ‘Full-Industrial’ at Avondale College, which meant that he worked to pay off his fees whilst also studying. He graduated on the Avondale Missionary Course in 1922.

However, Noel was still behind in his academic achievements—he had never made up for the poor education he had received in India and Burma—and therefore he studied at the Fort Street Boys High School in Petersham, Sydney, during 1923 – 1924. He returned to Avondale in 1925 and then graduated as a teacher at the College in 1926. Noel arrived in Western Australia in 1927.

In Noelene’s opinion, her father’s troubled experiences in Mussoorie helped shape his personal values as an adult, in particular his strong belief in social justice. It is no surprise that Noel spent 15 years working in single-room schools in the country—in Payne’s Find and Narngalu—before moving to Carrolup. He could ensure that no violence towards children occurred in ‘his’ school as he was the only teacher.

However, spending so much time in isolation in one-roomed country schools was not the best preparation for dealing with the events that subsequently occurred at Carrolup. Noel was seemingly ‘disconnected’ from mainstream society and how it operated, as well as the machinations of the Department of Native Affairs and government policies of Western Australia.

[1] Biographical details described here are taken from a section, entitled The Years of Our Lives, of an unpublished notebook written by Lily White. Noel & Lily White Collection.

I managed to find the school’s Annual after a Google search (and visit to the AbeBooks website) revealed a copy was available at Antiquarian & Collectors’ Books in Godalming, UK. Many thanks to Brian P. Martin for shipping the book promptly. It is a treasured find!

Although Noelene White, John and I are unable to clearly identify Noel, we believe he is probably in the photograph. Noel would have been eight or nine years old at the time.” Connection: Aboriginal Child Artists Captivate Europe. David Clark, in association with John Stanton. Copyright © 2020 by David Clark

Coincidentally, my great-great grandmother Margaret Leonora Barnett was born in Moulmein (now known as Mawlamyine) in British Burma, and spent some time in Rangoon before her family moved to Madras (now Chennai) in India. My mother was born in Madras. One of a number of coincidences relating to the Carrolup story and my family, which I will discuss in a later blog.