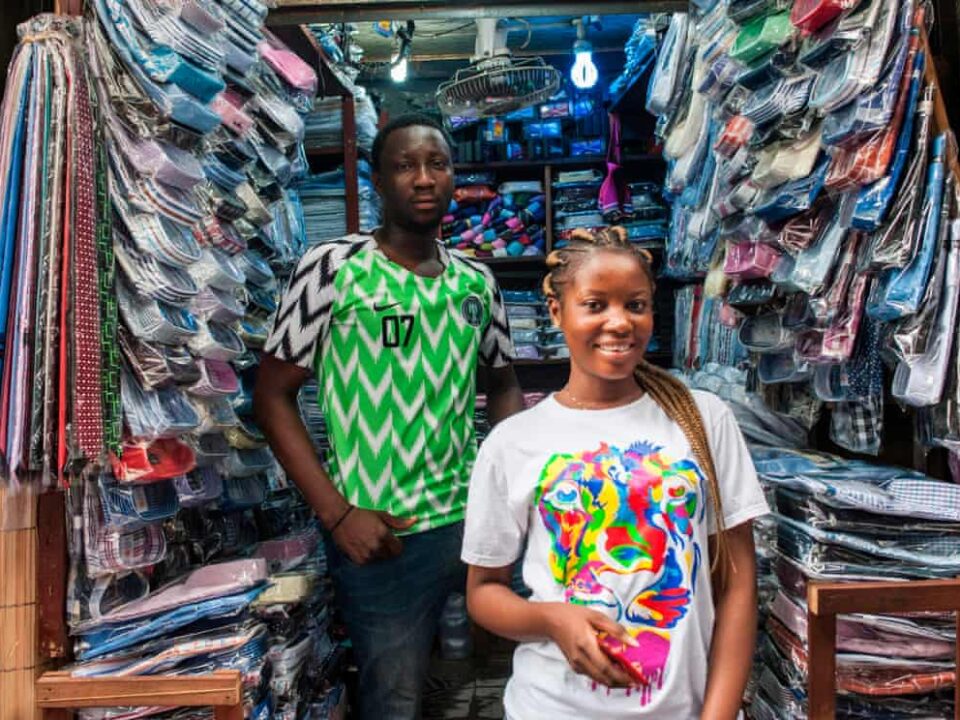 ‘Nigerians believe, no matter the condition, that things will turn around some day.’ A shop in Balogun market, Lagos. Photograph: Stefan Heunis/AFP/Getty Images

Here is an by intriguing article by Chigozie Obioma entitled Life-saving optimism: what the west can learn from Africa from the Guardian online in 2018.

‘Nigeria, like most African nations, has been taught and dictated to since its independence, largely seen by the rest of the world as a receptacle for ideas rather than a generator of them. But is there something the world could learn from us?

During the past few weeks in Nigeria, I’ve interviewed some 40 strangers whose lives, like those of most people in the country, were mired in want and suffering. Everywhere, people ambled about sweating, their skins wearing gradations of deprivation. Everywhere you turned there was a conspicuous lack of opportunities. Beggars walked about naked or in rags, bearing their ailments as banners to request help. Even those who were fully clothed – many looking flamboyant – seemed to be in urgent need of help, aching to achieve a certain dream.

A few days before the trip, I had spoken to a group of young students enrolled in a mentorship programme at an American university. My friend who directs the scheme had told me that many students came in with suicidal thoughts, and about the difficulties of trying to help to prevent them from sliding into this pit.

This phenomenon – of reaching the edge of life, of losing any sense of meaning because of adversity – was something I would not have contemplated witnessing a few years ago while still living in Nigeria. But, having lived in the US for the last five years, having known friends in depressive states, and having seen how, in my three years teaching at a university, young students have taken their own lives almost every year, I have begun to slowly understand it.

There is a lot that can happen that can be too much for a young person, or even anyone, to handle. On the first day of class, I often ask my creative-writing students to write about their childhood. Often, these students are forced to confront their pasts: the father who ran away and delivered them to foster care; the mother who worked two jobs to raise them; the grandparent who took them to the farm every day. And when they write fiction, much of it is often filled with stories around loved ones who have died, or some other dire circumstances. Their lives, despite living in the most prosperous nation in world history, are mired, tarred, blistered, even shattered.

In Nigeria, most of the people I spoke to were living shattered lives but in a poverty-stricken nation. There was a young man who worked a 24-hour shift as a security officer at a mid-sized hotel; a tailor who survived by carrying about a 19th-century sewing machine, stitching clothes; a man with three kids who lived on the £45-£50 per month he made selling used, weather-worn books; a man with a face badly disfigured from a power-generator explosion; a taxi driver whose car was so old and ramshackle he and I had to push it twice to start, and from whose floor I watched the road sweep past through a hole. I asked all of them one question: are you happy?

Most of them said they were happy, even if not completely. A fraction said they were not happy because of their condition. Only one of these nearly 40 people said they were depressed. Had any of them at any time contemplated suicide? This question was often met with surprise, and to some, shock. A few asked me why I would ask them such a terrible question. In fact, one – a mechanic who lived on less than £150 a month when “things were best” – was offended. He felt I was cursing him and sent me away.

At no point had any of them contemplated the idea of not living. They could not understand how anyone could come to that idea. It was foreign, something they heard of, but which was alien to the Nigerian.

Why? I wondered. Why would this hardship, this hopelessness, this great, crushing poverty and suffering not drive them to this point? The answers were mostly uniform: there was no hopelessness. Nigerians generally believe, no matter the condition, that things will turn around some day. A driver who had been off work for days because he did not have 7,000 naira (£15) to fix his windscreen wiper told me: “Suffering is even sometimes good. Christ said in this world there would be suffering.” He argued that it was the necessary state of the world. “If you lived in a world where there was no suffering, it will be an abnormality. That would make anyone miserable.”

Research into happiness has been inconsistent. A 2011 poll found Nigerians to be the happiest people on Earth, and recent surveys have put poorer nations above the wealthier ones. One thing is clear: it is not quality of life that determines the way these people live and how they perceive the world. It is rather their optimism. There is an unshakeable belief that, no matter how long it takes, things will be well again. Ask the man who earns $60 a month how will things turn around. He can’t tell, but he knows they will. And if indeed things will be well, how can he be depressed? In other words, suffering is a temporary carceral state from which freedom is expected.

Undoubtedly, the source of this optimism is not rationality. One source, I think, could be traditional beliefs passed down through generations. In the precolonial cultures of many Nigerian tribes there was a strong form of individualism that essentialised a person in such a way that it is simply difficult to find a Nigerian with low self-esteem.

This was mostly why suicide is largely considered the most egregious action a person can take. One who died that way was – and even to this day in some places – not accorded a traditional burial. One wisdom often cited among the Igbo, for instance, to explain this phenomenon is that there is nothing the eyes can see that can make it cry blood in place of tears. The other reason for the optimism seems to be sourced in strong religiosity among Nigerians.

Although religion is a contributing factor in the state of the nation, as it is sometimes used to manipulate poor people and it provides food for docility, it is the major reason why the people are able to endure hardship. There is a belief in the afterlife – an extension of living that gives life meaning. If indeed life continues, then this is a phase – this lack, this sickness, this deprivation. Soon, I will live well again. But if life ends here, if all the loved ones who had died are in fact forever gone, if there is going to be no justice for all the wrongs ever done to me in this world, then how can happiness be possible?

Can any similar antidote to soul-crushing depression be found in western cultures? Indeed, suicide was outlawed in the UK until 1961. But there doesn’t seem to be an internal mitigating force comparable to that of the typical Nigerian. One reason could be the fact that people in the west (and in advanced countries) are so used to things being stable, functioning, and even successful that some can break down at relatively minor disruptions.

This might explain the preponderant use of “fixers” such as antidepressants and illegal drugs as health professor Monica Swahn observed in her recent essay. It might also explain why religion, especially Christianity, seems not to have such a life-softening effect that faith has amongst Nigerians in the west’s most religious country, the US.

While Nigeria has failed in many ways where western nations have not, its people’s mindset has helped foster a sense of life-saving optimism increasingly absent in the west. Is this resilience something the world can learn from Nigerians? Perhaps it is time we considered this.

Chigozie Obioma is the author of The Fishermen, and is a professor of English and creative writing at the University of Nebraska-Lincoln’