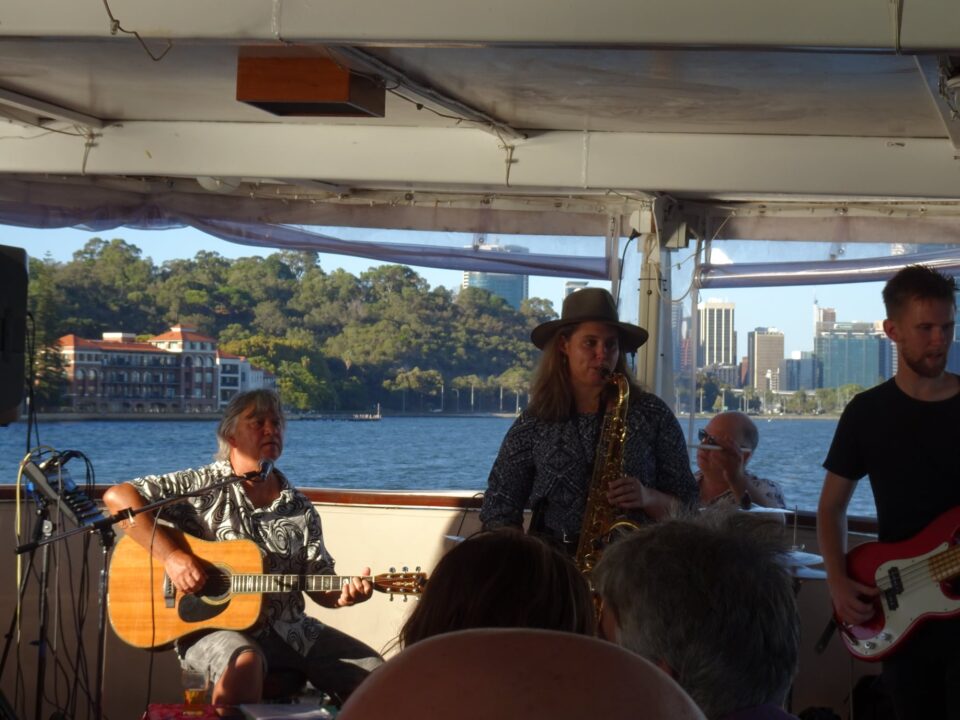 My partner Linda and I, along with John Stanton, spent a lovely Sunday afternoon/early evening aboard P.S. Decoy, a Western Australian sea-going paddle steamer that works the Swan River. We were there to listen to local band ‘Dilip ‘n the Davs’, who performed a heart-warming Twilight Tribute to American songwriter-singer and musician Bill Withers. The band played a dozen of their favourite Bill Wither’s songs, along with some of their own material that has been influenced by the master songwriter. It was a thoroughly enjoyable show.

We had decided to go to the gig not just to hear the band play in a most beautiful setting, but also to finally meet band leader Dilip Parekh. So who is Dilip Parekh?

Well, if you don’t know, here is the story of how I was first contacted by Dilip,  which was described in a blog posted on 19th May 2020. Dilip had contacted me a month earlier, as previously described. Here is what he said:

When I called Dilip, he told me that he had been greatly moved by the Carrolup story after attending the Koorah Coolingah exhibition in Katanning in 2006. He visited Carrolup and later wrote the song, which was included in the band’s album Don’t Mind If I Do in 2008.

I absolutely loved the song. As I listened, my eyes filled with tears. I had not long finished the Carrolup book and scenes from the past just flashed through my mind. It was everything I could have hope for in a song about Carrolup. Dilip sent me a digital copy of the song and I used part of the song as the soundtrack for a slideshow of of Carrolup-related photos I put together in Apple Photos (see below).

I told Dilip I’d come and meet him. However, with Covid and all that I was doing at the time, our meeting never happened, although we stayed in touch. Then, last week, I saw the river gig advertised on Dilip’s Facebook page and that was that. Linda agreed without hesitation that we should go, as did John. And then we were there.

The band were excellent. All four members were really good, but I have to give a special mention to saxophonist Alannah Chapman. And a big thanks to our kind hosts on the P.S. Decoy. What a way to see Perth, along with excellent food and drink.

And as for Dilip. Well, he is obviously a talented songwriter and consummate performer, but there’s more. I have this feeling that he is what I call a ‘Connector’, someone with a big heart who brings people together, physically, mentally and spiritually.

And his song about Carrolup… it is very special. Here is part of the song. If you want to hear it all, go to link above.