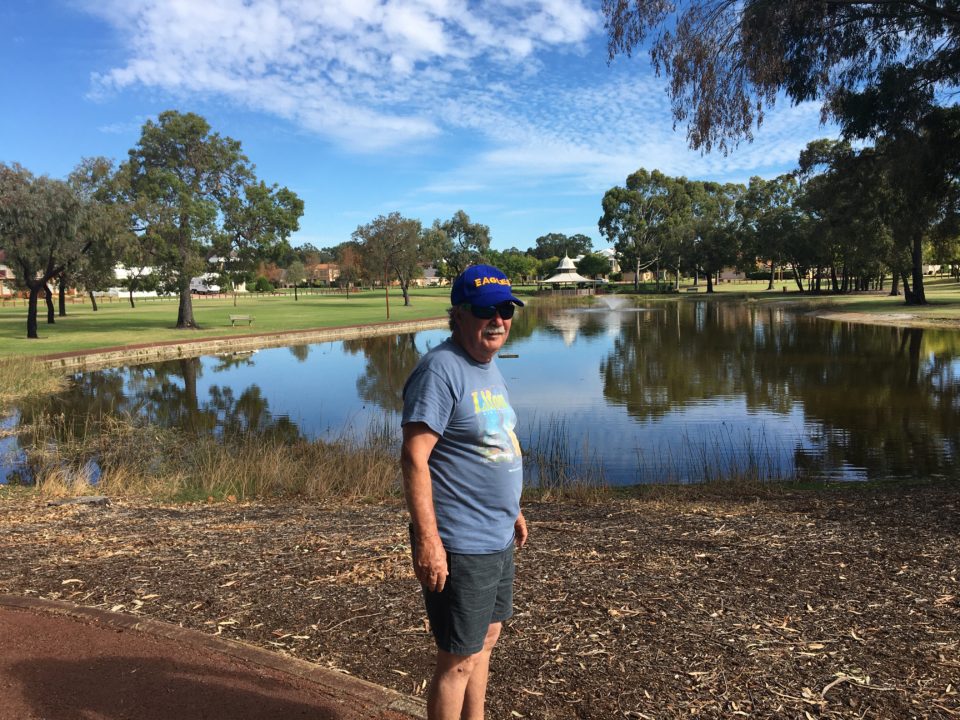 David's good mate Michael Scott from Perth, 42 years sober. Mike has worked as a drug and alcohol counsellor for many years.

I’ve just been talking with my close friend Michael (Mike) Scott. It’s his 42nd birthday today. Not his belly-button birthday, but he is 42 years sober today. What an achievement!

Mike started reading my first website, the drug and alcohol news portal Daily Dose, back in 2002, when I was living in South Wales. He lived in Perth. We corresponded a number of times before I called him in early 2009 and asked if he fancied a cup of tea. He replied, ‘How can we do that when you live on the other side of the world?’ I told him that I had just moved to Perth and my partner was working in the building next door to where he worked. At the time, Mike was working as a drug and alcohol counsellor for a government treatment centre, Next Step.

In 2013, I wrote Michael’s Story: The Power of Empathy and Compassion for my Recovery Stories website after several interviews with him. Here are some excerpts from that story, events and reflections across the course of Mike’s journey to being 35 years sober. Mike and I will be updating his Story in the next few weeks.

1. Early life in an alcoholic family

… When I returned to Perth in 1973, it was immediately clear to me that both my parents were drinking very heavily. They both seemed to have aged about ten years. I tried to keep them on the straight and narrow, but to no avail. I would drink with them, with the rational of, “If I drink slowly, they will drink slowly.” Not much hope of that! A perfect example of co-dependent drinking and thinking….’

‘I was drinking all day, every day, beginning with a ‘heart starter’ early morning. As I only drank beer, I rationalised that I was not an alcoholic. I suffered blackouts and spent many a time wrapped around the toilet bowl. I had horrendous hangovers, sweated a lot all the time, and was constantly unwell. I was not getting a relaxed night’s sleep, which is common with heavy drinkers. I had anxiety attacks and worried about all sorts of things. I was totally dehydrated, which I’m sure made the hangovers, withdrawals and anxiety even worse.

I would wake up early morning and stare outside, saying to myself that my life couldn’t go on in this way. I was killing myself. I tried to stop drinking on numerous occasions, but there was no method or plan to this stopping process. I always relapsed. I had no coping mechanisms and no idea of what to do when I wasn’t drinking. I never considered getting help, as there was no obvious place to go in those days….’

3. The decision to stop
‘I made the decision to stop drinking on April 10th, 1978, three years after my parents had died. My last drinking session took place at the Shenton Park Hotel. I finished my last drink and slammed the glass down, saying to myself that this was it! “No more drinking!” I have not had a drop of alcohol since then.

I walked home and called an ambulance, saying that I had an alcohol problem and needed help.  The ambulance took me to Sir Charles Gardner Hospital where a doctor started shaking his head in dismay (and probably disgust) at the sight of his wretched-looking patient. I was terribly thin (bordering on anorexic), scruffy, dirty and smelt badly. He referred me to the D20 psychiatry ward at Charlie Gardner’s and I spent a night in this infamous facility.

On the following day, I was taken to the local detox/rehab unit on Ord Street in Perth. I remember this long walk vividly, probably the longest walk I have ever taken. I was completely shot, burnt out by years of drinking, but struggled on, as I knew that I had to do this…’.

‘My time in the rehab was a time-out period. I had so desperately needed a rest and to be in a place where I could get away from all the stresses of ordinary life. I learnt to gain some respect for myself from the way the rehab staff treated me and identified with other people who were also trying to overcome their drink problem.

For the first time, I learnt strategies as to how to avoid drinking again. And by not drinking, my resolve to remain abstinent strengthened. My desire to get a job helping other people overcome their drinking problems became part of the Recovery Plan I developed for myself….’

5. Reflections on recovery
‘Recovering people need empathy and TLC (Tender Loving Care). Rapport with the patient is key to helping them recover. In my opinion, good rapport should be a given working in this field—it is what I experienced in rehab and what helped me get better, and it is what I aim for with my clients.

I chat with them about their Recovery Plan and their Recovery Goals. I emphasise to them that recovery must be fun; they don’t want to be hanging on for grim death in their recovery. I encourage them to get out and do things. I love movies and often encourage clients to go to the cinema. Sadly, there are not enough recovery-related activities going on in the local community of Perth, which is a major shortcoming in our current care system for people with substance use problems.

I believe that socialisation—the learning of interpersonal and interactive skills that a person requires to interact with other people—is one of the most important aspects of recovery and recovery-based care.

The patients really appreciate the simple activities I organise in the unit, including scrabble, Wii and Bocce, which are used to facilitate relationships and communication, and help take people’s minds off their troubles. Such social activities help our patients overcome the psychological isolation that is so often intimately linked with addiction.

Learning simple social skills helps them interact with other people and survive in the outside world. I used to take our patients for an outing once a week, such as having a Devonshire tea in a nearby suburb (which they paid for), and they really appreciated this. Sadly, management has stopped this activity. We used to have daily walks, but these have been shortened and curtailed to four a week.

I love my job and working with the clients. Sure, it can be hard work sometimes, particularly with the difficult and chaotic patients. Those who want to take the journey to recovery, or have their eyes opened to that possibility, are great to work with (as are some of the difficult clients) and I get real pleasure in seeing them make even small improvements in the time they are with us. I have to confess that I get very much more pleasure interacting with the clients than interacting with some of our staff, particularly some of the managers….’

Well done, Mike You are a true inspiration! You know, as well as I do, the importance of stories like yours for helping other people on their road to recovery.

Readers, please check out the full version of Mike’s Story.