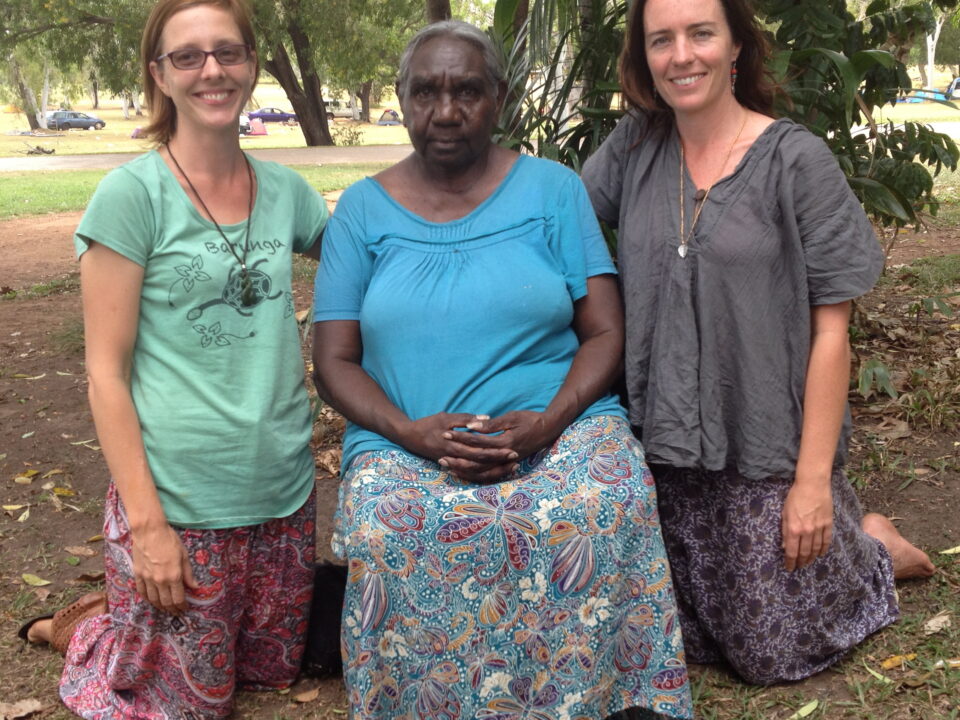 Yesterday, I posted a blog to celebrate Dr Miriam-Rose Ungunmerr-Baumann, Senior Australian of the Year 2021. I mentioned that I had visited Miriam-Rose’s Aboriginal community of Nauiyu on the Daly River in the Northern Territory. I did so, along with 17 others (adults and children), as part of an amazing Cultural Tour organised by Pip Gordon and Nicole Kinnaird in May 2015. Here are two blog postings I wrote on my website Sharing Culture just after my visit.

I fell in love with Nauiyu and its people. The people I met were just so warm-hearted.

Miriam Rose is a remarkable spirit-filled woman who cares wholeheartedly about her community. It was a great pleasure to sit and yarn with her. I will always treasure the painting she gave me as a farewell gift.

The two other Elders we spent a good deal of time with, Agnes and Bridget, are very special. They performed, with Miriam Rose, the Welcome to Country we experienced. It was wonderful listening to Miriam’s husband Ken—he is a treasure trove of information and stories about the country.

And there were so many other people with whom I enjoyed spending time. I’m terrible with names, but they know who they are. Two of the people I will never forget are Miriam’s nephew Troy (a brilliant artist) and Dylan (of the film ‘Australia’ fame, and a talented musician).

Time slowed right down in Nauiyu, which was really great! I found myself reflecting a lot. And I found a peace, which I had not felt in a long time. 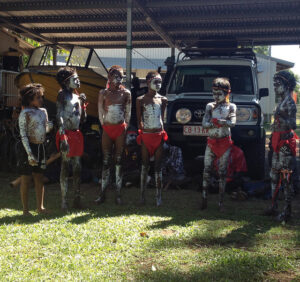 The ceremonial dance the young boys performed for us was really special. And it was great fun trying to do the dance, hearing the women behind us laughing loudly (mainly at me). When I saw them afterwards and said, ‘So you thought that was funny, eh?’, they all burst out laughing.

There were lots of other highlights during our time in Nauiyu. Visiting the school and purchasing the pupils’ paintings. Visiting the church and seeing so many examples of Miriam’s artistic talents.

Watching game after game of football at the festival, seeing so many talented players and watching the vocal supporters of different communities. Laughing and joking with local youngsters, and watching them respond to their inspirational Kiwi football coach.

Watching the basketball. Visiting the Merrepen arts gallery. Yarning with the locals. And listening to the beautiful music of Larrakia man Ash Dargan, who visited us from Darwin, whether he was playing didgeridoo, flute (he had different types), drums or guitar.

I’d like to focus on all the positives, but I cannot ignore one very strong negative that permeates life in Nauiyu. The community has been badly affected by the 2007 Intervention, as well as changes produced by the state government, as Miriam and former Northern Territory chief minister Clare Martin describe on another page of this website. 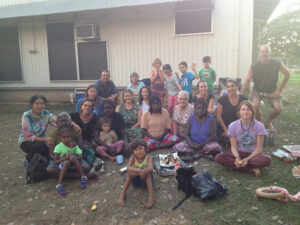 The community has lost all rights to make decisions about itself. All power has been diverted to people outside the community. Jobs have all but disappeared, particularly in housing maintenance. The quality of workmanship has been reduced, since outsiders have been brought in to replace local workers. The store, fuel outlet and job services are run by outsiders. There are no opportunities for local young people. I could go on.

I feel sickened by the paternalistic and racist attitudes of the federal and state governments. And yet the people I spoke to did not express anger, despite the negative impact that the outside world is having on the community. They want things to change and they are doing the best they can to minimise adverse effects.

I was deeply saddened to hear one person say that they felt that they could not speak out to the popular media because their words would be twisted and they would be made to look like a fool. They felt that the community would suffer from their speaking out. What sort of country are we living in?

This visit was not the time to collect and disseminate the stories. That time will come in the future. The outside world needs to know what is happening. I did not know what is happening until I read Clare Martin’s article and I think the vast majority of Australians do not know. Some of them will care.

I had an incredible physical and emotional experience when I came over the hill and saw the Daly River for the first time. I still cannot fully describe or explain it. I remember strong physical feelings in my chest and tears forming in my eyes. There were other physical signs as well.

I felt incredibly connected to what was unfolding in front of me. How, I don’t know?

What I do know was that I was not the only non-Indigenous person in our party who had these experiences. The people I spoke to who were visiting the river for the first time had similar feelings. 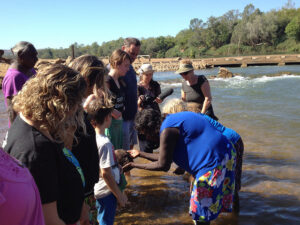 Pip and her family, who have visited Nauiyu on many occasions, are still emotionally affected when they visit the river. They always make a point of going there first, before visiting the community. They feel as if they are coming home.

The ‘Welcome to Country’ we had in the River, performed by Miriam, Agnes and Bridget, was very moving. I am touched even now as I think about it.

I spent a number of occasions at the river just ‘being there’. I came to understand to some extent what is meant by Dadirri, the Indigenous concept that Miriam Rose describes so well.

Dadirri is ‘is inner, deep listening and quiet, still awareness… When I experience dadirri, I am made whole again. I can sit on the riverbank or walk through the trees; even if someone close to me has passed away, I can find my peace in this silent awareness. There is no need of words. A big part of dadirri is listening…’

Please check out the beautiful film clip that Miriam and Pip had made about dadirri.

I found an inner peace down by the Daly River. I also came to realise whilst reflecting by the river that some of my own experiences over the past twenty years have left me somewhat traumatised. It was quite an awakening.

Most importantly, I also came to realise that I can heal this damage. However, I need to work in this inner peace that I found down by the river. I don’t think I was the only one amongst our party who felt like this.

One day, I was driving back with Ash Dargan after a trip to the Daly River Mango Farm. Ash suddenly stopped the car on the crossing, leapt out of the car and started playing his drum. 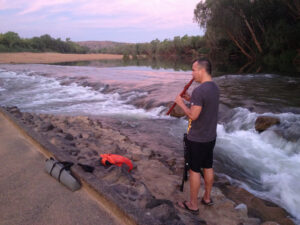 I started to watch him, transfixed by the beauty of what I was seeing and hearing, before starting to film on my iphone. [Not good, you might be thinking, bringing technology into such a beautiful situation]

It was a wonderful experience, but difficult to capture on film or with words. It felt as if Ash and his drum were connecting with the river.

In fact, Ash later said he had never played there before, but felt he was being ‘called’ to play. After some time of playing, he felt connected to the river. I swear I felt that connection being made. And then he started to play his digeridoo as well. Wow!

I felt blessed to be there watching what was unfolding. And I felt such a strong connection whenever I was down at the crossing. To think, Indigenous people have this connection that has gone on throughout their lifetime… and the lives of all their ancestors. How must that feel?’

You can see more photographs on my Sharing Culture pages: The People of Nauiyu and The Daly River. 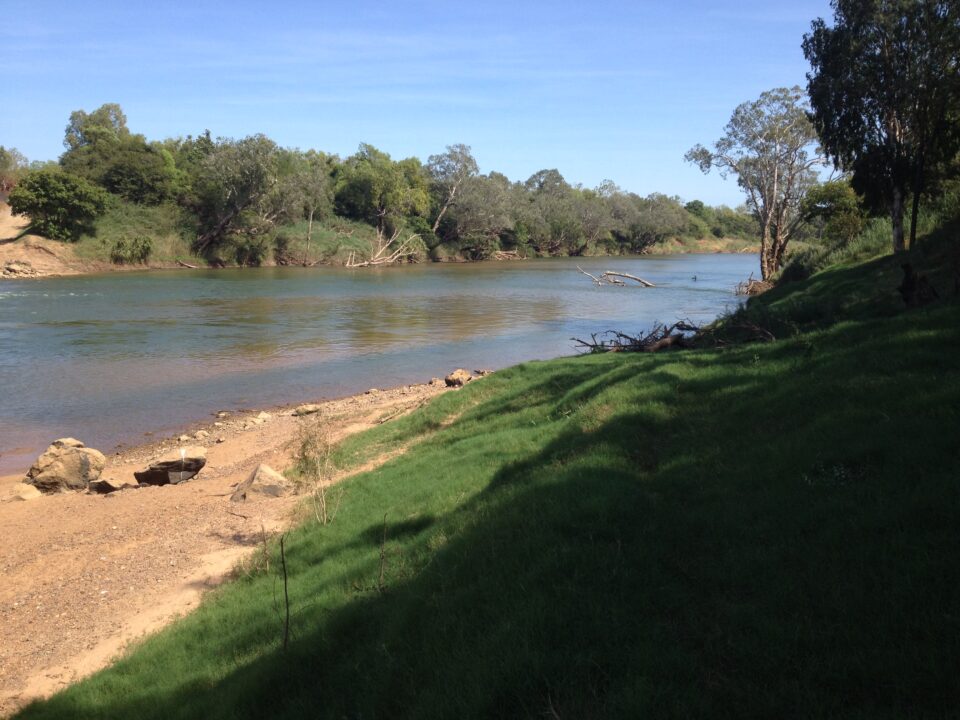