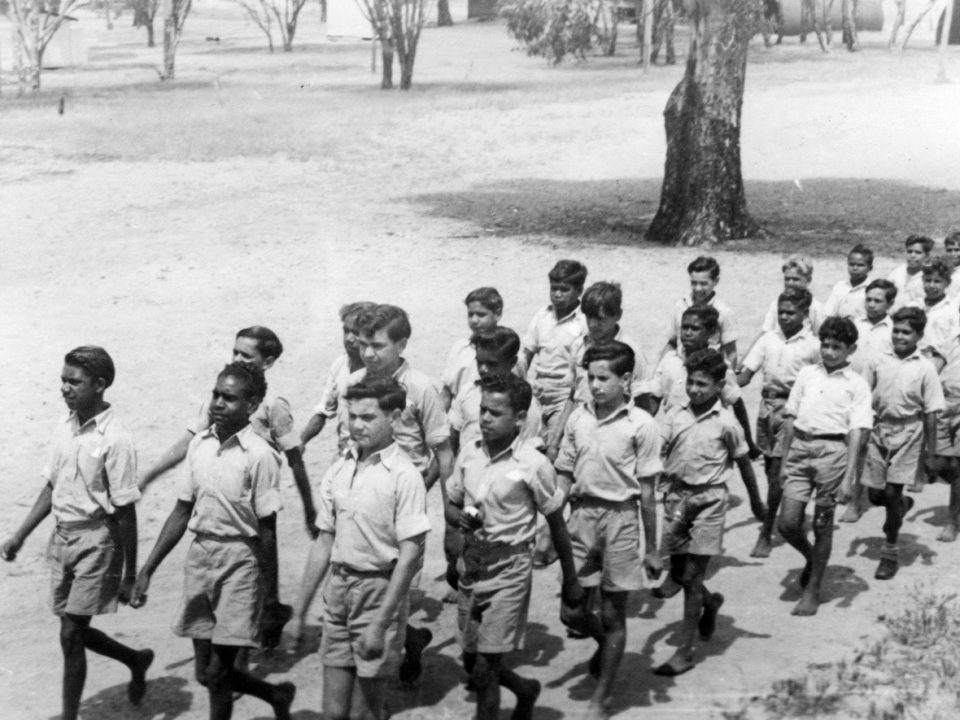 The boys of Carrolup marching for Mrs Rutter and Mrs Hack. Cliff Ryder is the third boy from the front of the nearest line. Photographer: Vera Hack, January 1950. Noel & Lily White Collection.

My last blog was the first of a series that is based on a chapter about the Ryder family from my book Connection: Aboriginal Child Artists Captivate Europe. These are the words of Charon Ryder, oldest of the Ryder siblings:

‘I want to talk to you about how I got in contact with David Clark. I saw one of David’s blogs on The Carrolup Story website, which included a photograph of four Aboriginal boys from Carrolup holding their artworks, and decided to send him an email and let him know who I was. I was so excited, overwhelmed would be a better word, for here I was looking at a photograph of my Dad that I’d not seen before.

David responded quickly to my email and we then corresponded by email and talked on the phone. He sent me five other photographs taken during Mrs Rutter’s second visit to Carrolup and asked if I could identify my Dad in them. He also sent me a letter that my Dad had written to Mrs Florence Rutter whilst he was at Carrolup. I then asked David if we could meet. He was enthusiastic to get together. 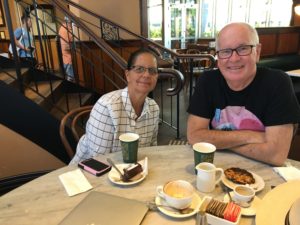 Charon Ryder and John Stanton ‘plotting’ next year’s collaboration, at our second meeting at the Dome in Bassendean, 15th November 2109. Photograph by David Clark.

I, along with my hubby John Kalin and grandson Treyje, met with David and John Stanton at the Dome in Bassendean on the 9th August 2019. That meeting was amazing! I heard answers to a number of questions that had been rattling in my head for a very long time. David told me some fascinating stories, and showed a number of photographs and other resources on his laptop. I saw my Dad in four other photographs taken on that day in February 1950, including one of the boys marching and another of the 1950 football team.

David talked about Mrs Rutter and Mr and Mrs White. I didn’t know these people. Yet they were part of my father’s life. If only my father was there that day to tell me more… but he wasn’t. I just wish he could be here today to talk about it. But unfortunately he’s not and I just want to finish this journey. Yes, a blog has become a journey.

I did not know that my sister Judy had contacted David prior to me. After David wrote his blog about our meeting at the Dome in Bassendean, Judy contacted me and we had a good chat. He had also sent Judy the letter that Dad had written to Mrs Rutter in March 1950. We were both deeply moved by this letter.

Recently, John and David filmed me telling my story and that of my father, and I read out Dad’s letter, written when he was 13 years old. What was amazing about this letter is that Cliff described having been at the Moore River Settlement before being moved to Carrolup at the beginning of 1950. This was the first time my family had ever heard about Dad being at Moore River.

To see and read my Dad’s letter is heart-breaking. But I’m ever so grateful that we have items like this. They help tell the stories which we as a family need to know. Not just for ourselves, but for our future generations. It’s overwhelming to sit here staring at the letter, knowing that it’s my Dad’s handwriting. He’s actually written to Mrs Rutter explaining where he was, mentioning his artwork, and describing other things he did. So he trusted this lady. He had a lot of faith in her. It’s amazing! And I look at the handwriting again and see it’s pretty neat for a boy!’ Connection: Aboriginal Child Artists Captivate Europe. David Clark, in association with John Stanton. Copyright © 2020 by David Clark 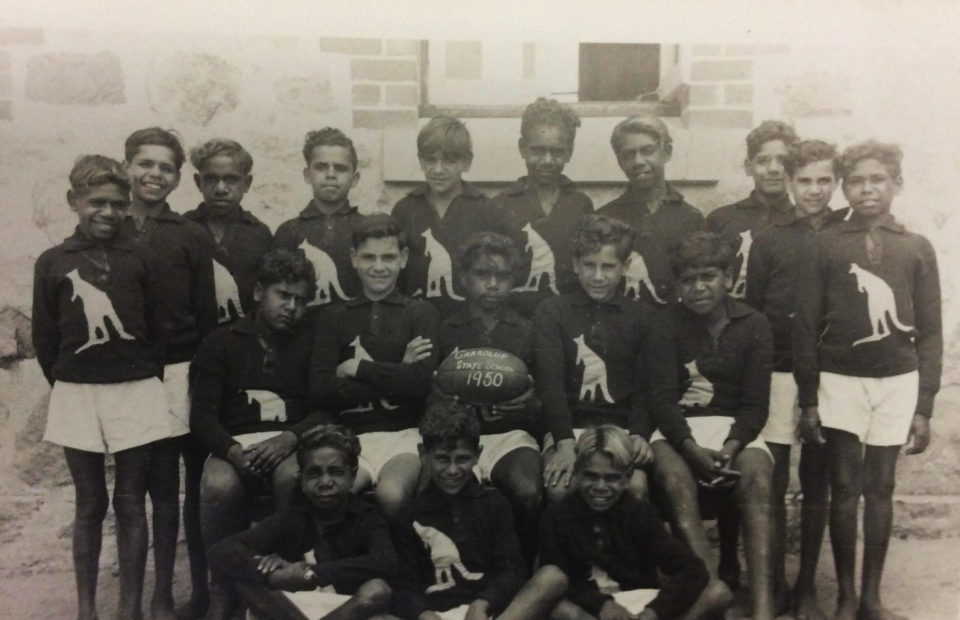 The 1950 Carrolup School football team. The football is held by Simpson Kelly and on his left is Cliff Ryder. Photograph: Noel White. Noel & Lily White Collection.