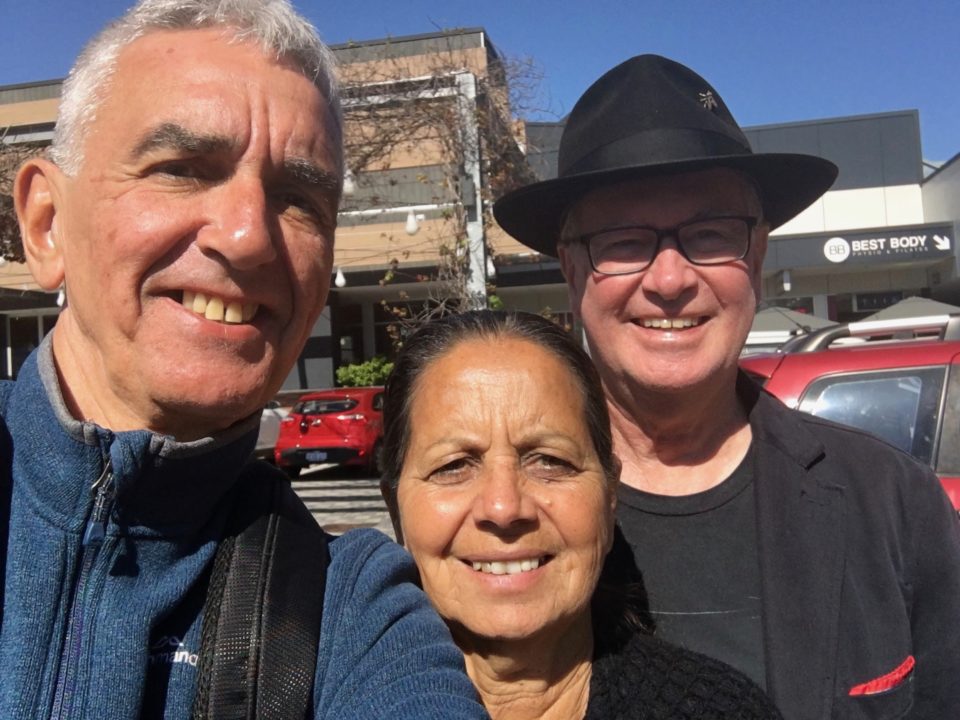 Charon Ryder with John Stanton and David Clark outside the Dome in Bassendean, 9th August 2009.

NB. If you haven’t previously read my previous blog posting about Charon Ryder, please do so before reading the present post. It provides important background.

I recently blogged about my initial discussions with Charon Ryder, eldest child of Cliff Ryder, one of the outstanding Carrolup child artists. John and I recently met with Charon, her husband John Kalin and their 4-year old grandson Treyje at the Dome in Bassendean. It was a very special occasion.

Charon saw us as soon as we walked through the door and it was like meeting an old friend again. She introduced us to John and Treyje. High-fives were exchanged with the youngster.

Charon’s John started telling us some fascinating stories about his ancestors and his search for information. We were enthralled. We then shifted attention to Charon who related details of her family to John Stanton. I had heard this information during our earlier telephone conversation [please see earlier blog].

Charon described how her brother George was a talented landscape artist. She then showed us a photo of an artwork completed by her son Keryn Kalin. This work was, quite simply, stunning!

Charon then told us that her 15-year old granddaughter Olivia Kalin had recently won a scholarship to Kalamunda High School for her contemporary art. Her sister Kerry’s daughter Teleasha Smith was also a talented artist, focussing on facial images. Clearly, art is in the Ryder family genes.

We showed John Stanton the photographs in which Charon had identified her father. I then showed Charon a photograph of the 1950 Carrolup School football team and she immediately recognised her father (second from the right in the middle row). 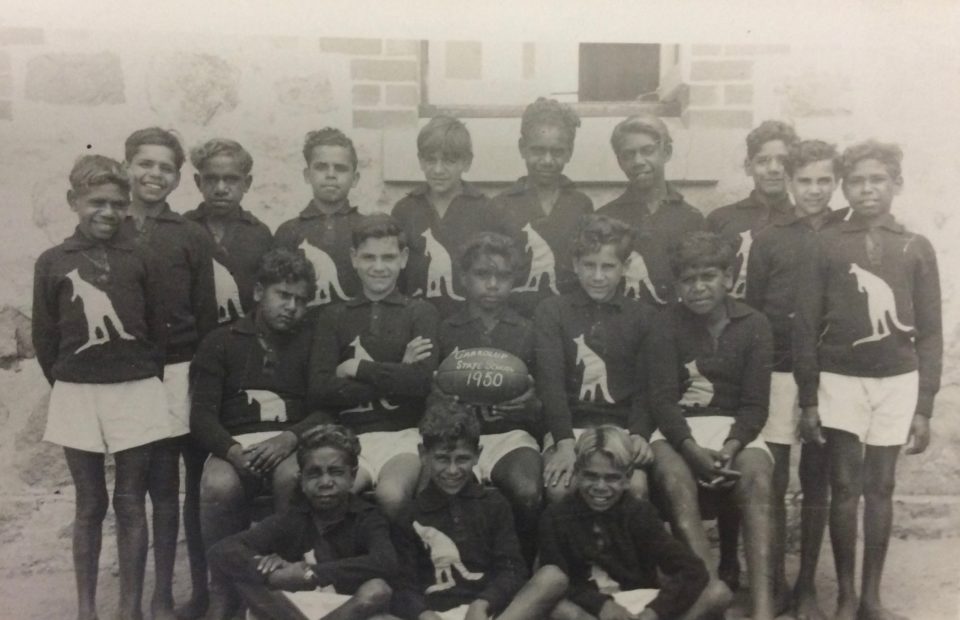 I talked about the successes of the 1948 and 1949 school football team and showed some of the images and clippings I had on my computer. John Kalin’s face lit up and he asked if I had been in touch with the West Australian Football Commission. I said that we had planned to contact them, but hadn’t done so yet. He offered to make contact for me, saying that he was sure that they would be very interested in the story.

We talked briefly about various aspects of life at Carrolup and I showed Charon and John more photographs and other material. It was clear to me that we need to put together a talk for family members about the Carrolup Story. This has been on my mind for some time now.

It was an emotional meeting for all of us, I think. Both John Stanton and I were thrilled at being able to pass on information to Charon which will help her family connect that little bit more with their father/grandfather/great-grandfather. I felt Charon’s pain, and her joy, at hearing and seeing more about Cliff.

As we talked, I reflected on the damage which has been done by the government policy of removing children from their families. And how society needed to move much more towards helping reduce that pain. As my colleague John shed a few tears during our discussion, I thought how lucky we all are that this man had spent 40 years working on matters related to the Carrolup story. In my humble opinion, this story may well have died if it hadn’t been for John Stanton’s persistence. I made this point to Charon and her husband John.

As I watched Charon, I suddenly realised who she reminded me of… my mum’s half-sister Jackie, who like my mum was born in Madras (now Chennai) to an Anglo-Indian woman. I mentioned this to Charon and she said that she did have Indian blood in her from her mother’s side. However, it was Native American blood!

Charon indicated that she wanted to get us together with other members of the family, probably out at Goomalling so that we could visit her father’s and mother’s graves. If the weather is good, we’d have a barbecue. What a lovely idea. We have now agreed a date in September and John and I are really looking forward to the occasion.

Charon has also agreed to be interviewed on film at John’s house. She stressed to us how important it was for her family and her future generations to have a record about Cliff’s story and the ongoing story of his family. We’ve always considered this to be an essential part of our project. The Carrolup Story is really a Story of Stories.

Before leaving Charon, we took the above selfie. John and I left Charon really buzzing. It had been a wonderful morning.

Thank you, Charon, John and Treyje.