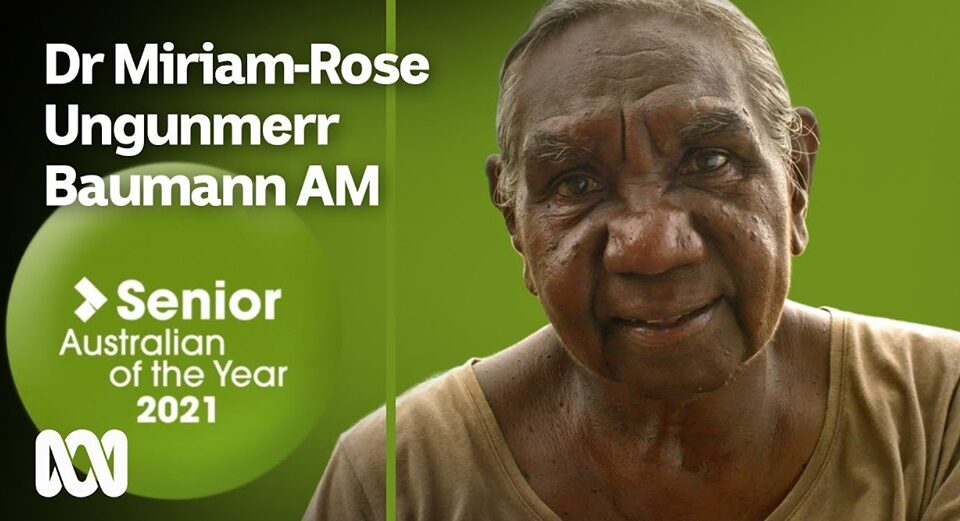 I was absolutely thrilled to see that Dr Miriam-Rose Ungunmerr-Baumann was made Senior Australian of the Year 2021. Miriam Rose has done so much for Aboriginal peoples around Australia, as well as for society as a whole. Her Award is thoroughly deserved.

I was fortunate enough to meet Miriam-Rose and spend four days in her community of Nauiyu as part of a cultural tour organised by Pip Gordon and Nicole Kinnaird in May 2015. Whilst in Miriam Rose’s presence, I could see, hear and feel what a remarkable woman she is and what a beautiful soul she possesses. I will write about this visit in a blog post later this week.

For now, I would just like to tell you a bit more about Miriam-Rose, which was original written as a short biography when she became an Advisor for my trauma healing educational initiative Sharing Culture back in 2015. I’d also strongly encourage you to check out the video at the end of this post in which Judy Atkinson, the lady who inspired me to work in this field, talks about Miriam-Rose and her Award. It’s a beautiful and moving short film.

‘Miriam Rose Ungunmerr-Baumann (AO) is an Aboriginal Elder from Nauiyu (Daly River), where she served for many years as the principal of the local Catholic primary school. She is a renowned artist, writer, activist and public speaker, a remarkable spirit-filled woman known for her reflections on Dadirri (inner deep listening and quiet still awareness).

In 1975, Miriam became the Territory’s first fully qualified Aboriginal teacher, holding the position of Art Consultant with the Professional Services Branch of the Northern Territory Department of Education. During this time, she visited schools throughout the Territory, thus gaining the opportunity to advance her commitment to the inclusion of visual art as a part of every child’s education.

In 1993, Miriam was appointed principal at St. Francis Xavier School at Daly River. In 1998, she was appointed a Member of the Order of Australia, for her services to Aboriginal education and art.

In 2002, Miriam was awarded an Honorary Doctorate from the Northern Territory University, in recognition of her leadership and example in the fields of Aboriginal education and the visual arts, and for her contribution to the general community in the Northern Territory. In 2004, she was appointed to the now defunct Federal Government advisory body, the National Indigenous Council.

In 2015, Miriam was one of four Northern Territory Finalists for the Australian of the Year Award.

As well as being a committed and innovative educator, Miriam is a talented and accomplished artist who was an early experimenter with combining traditional techniques with western acrylics. She used art as a means of encouraging children to express themselves.

Miriam advocates for experiences that allow Indigenous youth to learn to ‘walk in two worlds’, those being Aboriginal culture and mainstream Western culture. Her many contributions have greatly benefited both local Aboriginal and broader mainstream society in numerous ways.