The Closure of Carrolup School: Outcry

I’d just like to remind you that you can read a 12-part summary of the story of the Carrolup child artists in the Story section of our website, which starts with Colonisation.

The Department of Native Affairs in Western Australia closes Carrolup School in December 1950 with little, if any, warning. Teachers Noel and Lily White are devastated. Mrs Florence Rutter, the 71-year-old Englishwoman who had visited Carrolup twice and been given permission by the state government to exhibit and sell Carrolup art in Europe, is shocked. Here is what happens in the aftermath of this school closure, described in our Outcry section. [I’ve made a few minor changes from the original in the text below.]

‘Mr Middleton tries to justify the school’s closure in a letter to The West Australian newspaper. He talks about sending the boys to missions and says:

‘… they will at last begin to receive some spiritual education and training which may not yet be too late to stabilise sufficiently their characters to a point where they may have some understanding of what is right or wrong…’ S G Middleton, 1951

Letters to newspapers question the government’s decision; they also highlight the Whites’ remarkable work with the children.

The West Australian highlights a report by the last superintendent at Carrolup, Mr Vernon Sully, in which he describes the disgusting conditions at Carrolup and recommends closure of the settlement. The same newspaper article also states that the Department of Native Affairs intends Carrolup to become a training and education centre for boys.

John Stokes, who has done so much to promote the Carrolup art and football, writes a long letter to The West Australian (click on photo above to see the article in full), highlighting the achievements of the Carrolup boys and Noel and Lily White. He questions Mr. Middleton’s belief that the art is of little use to the boys’ future livelihoods. 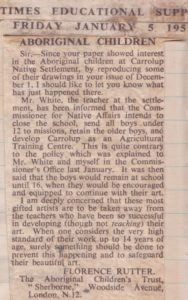 Mrs Rutter has continued her exhibitions in England in the latter part of 1950. She is informed of the school’s closure by her good friend Mary Durack Miller, who is to play a significant part in our Story from now on. Mrs Rutter writes to the prestigious Times Education Supplement in January 1951, describing what has happened at Carrolup.

Mrs Rutter continues to exhibit her collection of Carrolup artworks in the UK throughout that year, and in 1952. Royal houses in the UK and the Netherlands are enchanted by the beauty of the art.

Back in Western Australia, whilst some of the Aboriginal boys are sent to missions, others are left at Carrolup. The Department of Native Affairs opens a training centre for Aboriginal rural workers, Carrolup Farm School. The school is renamed Marribank Farm School in June 1951. It is closed by the government in May 1952, and later taken over by the Baptist Union.’

The next part of our summary of the story of Carrolup, entitled Shattered, describes what happens to the boys of Carrolup, in particular Revel Cooper, Parnell Dempster and Reynold Hart, in the few years after the school closure.