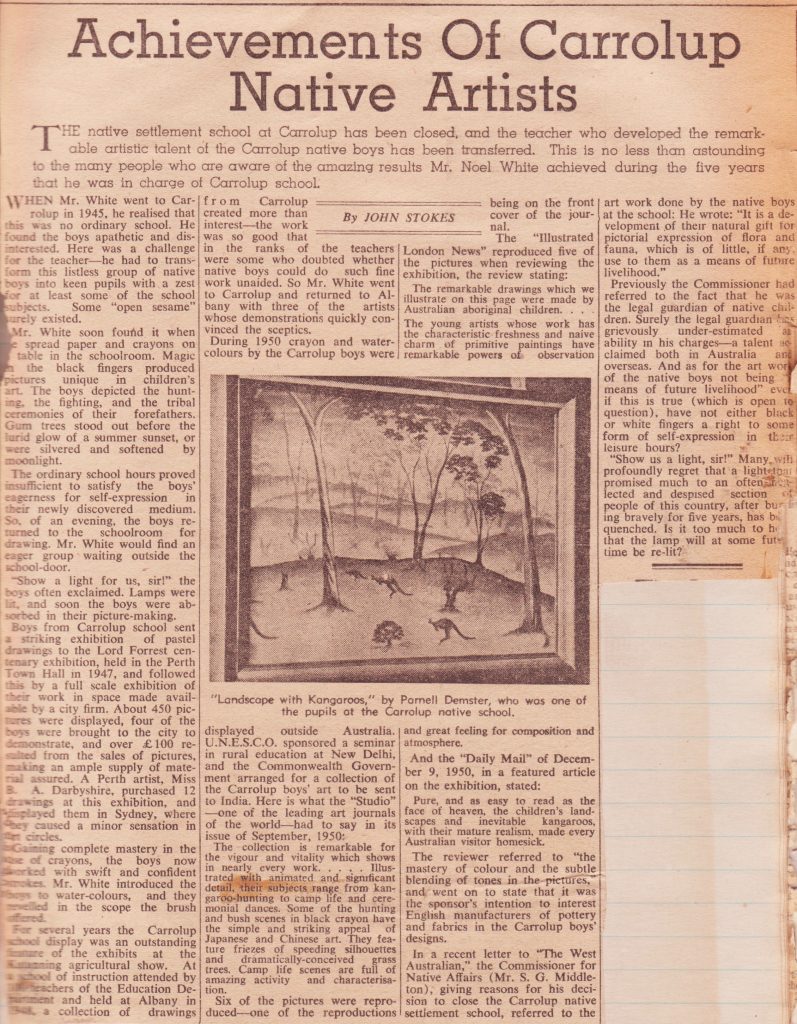 Mr Middleton tries to justify the school’s closure in a letter to The West Australian newspaper. He talks about sending the boys to missions and says:

‘… they will at last begin to receive some spiritual education and training which may not yet be too late to stabilise sufficiently their characters to a point where they may have some understanding of what is right or wrong…’ S G Middleton, 1951

Letters to newspapers question the government’s decision; they also highlight the Whites’ remarkable work with the children.

The West Australian highlights a report by Mr Sully, in which he describes the disgusting conditions at Carrolup and recommends closure of the settlement. The article also states that the Department of Native Affairs intends Carrolup to become a training and education centre for boys.

John Stokes, who has done so much to promote the Carrolup art and football, writes a long letter to The West Australian highlighting the achievements of the Carrolup boys and Noel and Lily White. He questions Mr. Middleton’s belief that the art is of little use to the boys’ future livelihoods.

Mrs Rutter has continued her exhibitions in England in the latter part of 1950. She is informed of the school’s closure by her good friend Mary Durack Miller, who is to play a significant part in our Story from now on. Mrs Rutter writes to the prestigious Times Education Supplement in January 1951, describing what has happened at Carrolup.

Mrs Rutter continues to exhibit her collection of Carrolup artworks in the UK throughout that year, and in 1952. Royal houses in the UK and the Netherlands are enchanted by the beauty of the art.

Back in Western Australia, whilst some of the Aboriginal boys are sent to missions, others are left at Carrolup. The Department of Native Affairs opens a training centre for Aboriginal rural workers, Carrolup Farm School. The school is renamed Marribank Farm School in June 1951. It is closed by the government in May 1952, and later taken over by the Baptist Union.

The Closure of Carrolup School: Outcry: After the closure of the school with little or no warning to staff and pupils, people write letters to the press in both Western Australia and England criticising this decision.

Achievements of Carrolup Artists: Teacher John Stokes, who has done so much to promote the work of the Carrolup artists, highlights their achievements and challenges the views and actions of the Commissioner of Native Affairs.

Letters from Two Royal Houses: In 1952, Noel & Lily White receive a letter on behalf of Queen Mary, wife of George V during the time he was King of the UK, whilst Mrs Rutter receives a letter on behalf of Princess Wilhelmina of The Netherlands, both letters praising the Carrolup artworks.