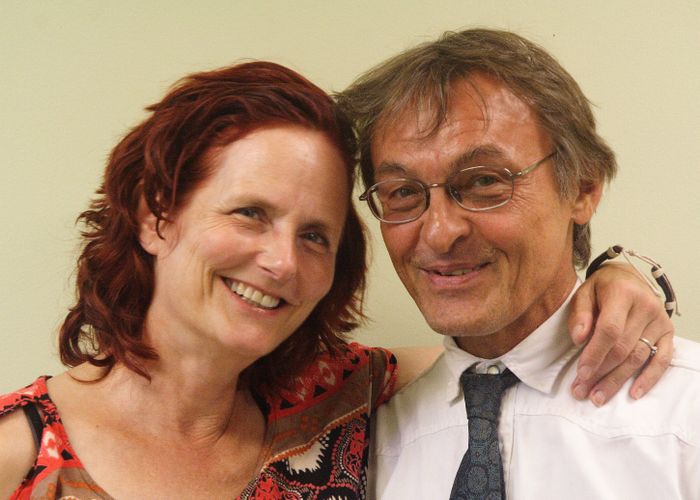 Dr Lewis Mehl-Madrona with Barbara Mainguy of the Coyote Institute for Studies of Change and Transformation.

Lewis Mehl-Madrona is a man I greatly admire and his book Healing the Mind Through the Power of Story is well worth a read. Here is an interesting section from the book:

‘The narrative movement in psychiatry is concerned with understanding the stories of pain and suffering told by people within context. These stories have plot, costars, villains, and audiences of accountability.

Suffering is not eliminated through the expert gaze of the law or of medicine. Putting something under the microscope for inspection does not change it. It reifies it and keeps it the same. It makes a changing story (verb) into a noun (object, no change).

Equal partnerships are required for real change to occur. People must have a forum in which they can trust and believe in each other and simply talk about what troubles them and what they desire. 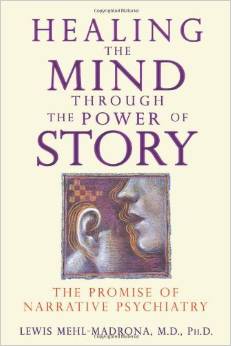 Healing the Mind Through the Power of Story: The Promise of Narrative Psychiatry by Lewis Mehl-Madrona

The narrative movement provides a bridge between European philosophy and concepts and the indigenous worldview and indigenous concepts of story, and how story becomes us and we become story and story is all there is. Our work is to render all people nondefective; to celebrate each person’s unique resources, talents and skills. Indigenous views of worth revolve around what we do within the relationships that we have.

Dominant culture constructions of social relationships render some people inferior and ashamed. Our dominant culture thrives on large classes of people feeling that way (ethnic minorities, women, gays and lesbians, and so on). Lack of skill in negotiating within the dominant culture is turned into feelings of personal inferiority and self-defectiveness.

I remember my young male clients in Saskatchewan who joined Indian gangs. Tony, for example, had nothing. He lived in a two-bedroom house on a rural reserve with eighteen other people, who slept in shifts to accommodate the low ratio of beds per person. His parents were alcoholics, as were his grandparents.

Being in the gang gave him a sense of pride. He described it like being a war party in a more ancient time. The “braves” could raid “enemy camps” (other gangs) and count coup on those gang members as a way of gaining status. The sense of trust that his gang members would protect his back was incredibly comforting to Tony, for no one had protected him before.

Only through traditional healing could Tony find that same sense of community and camaraderie that he had found in the gang. It also provided him with a healing counter-narrative – a story that could undermine the assumptions of a particular story. Within society, counter-narratives that rebel against destructive conventional concepts or constructions like racism or the oppression of women (and I would add conventional concepts of anxiety and depression) are agents of social evolution.

For Tony, the counter-narrative was that a sense of belongingness, meaning, and purpose was better found in traditional spirituality and ceremony than in the gang, especially because the risks of dying were so much less.’ Lewis Mehl-Madrona in Healing the Mind Through the Power of Story: The Promise of Narrative Psychiatry